By SimplilearnLast updated on Jun 6, 2022 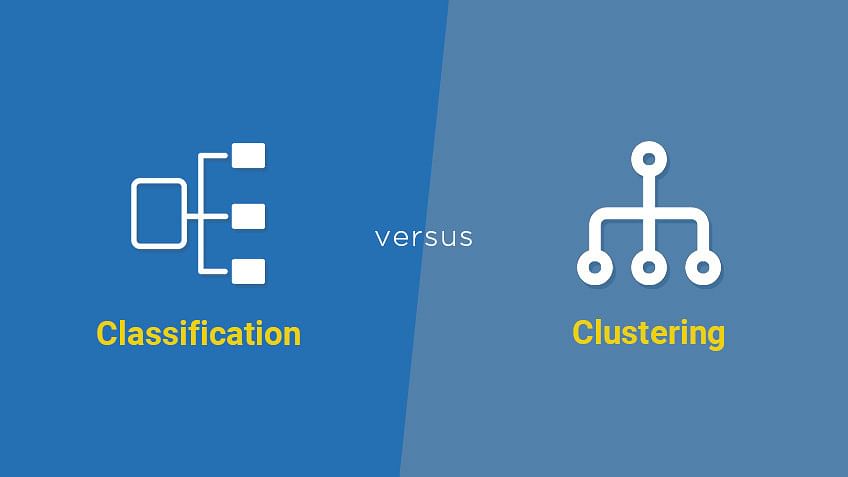 Clustering is an example of an unsupervised learning algorithm, in contrast to regression and classification, which are both examples of supervised learning algorithms. Data may be labeled via the process of classification, while instances of similar data can be grouped together through the process of clustering. If the variable of interest in the output is consistent, then we have a regression problem. This article provides a basic overview of clustering and classification, as well as a comparison between the two.

It is a kind of linear model that may be used in the process of classification. When determining the likelihood of something happening, the sigmoid function is applied to the data. In the classification of categorical variables, there is no better approach than this one.

Calculating the distance between one data point as well as every other parameter is accomplished via the use of distance metrics such as the Euclidean distance, the Manhattan distance, and others. In order to correctly categorize the output, a vote with a simple majority from the k closest neighbors of each data item is required.

Unlike linear methods like Logistic regression, this is a non-linear model. It uses a tree structure to construct the classification model, including nodes and leaves. Several if-else statements are used in this method to break down a large structure into smaller ones, and then to produce the final result. In both regression and classification issues, it may be put to good use.

Bayes' theorem serves as the foundation for this particular method. It works on the assumption that the presence of one feature does not rely on the presence of other characteristics. In other words, there is no connection between the two of them. As a result of this supposition, it does not perform very well with complicated data in general. This is because the majority of data sets have some type of link between the characteristics. Hence the assumption causes this problem.

A multidimensional representation of the data points is used. Hyperplanes are used to separate these data points into groups. It shows an n-dimensional domain for the n available features and creates hyperplanes to split the pieces of data with the greatest margin.

It begins by establishing a fixed set of k segments and then using distance metrics to compute the distance that separates each data item from the cluster centers of the various segments. It then places each data point into each of the k groups according to how far apart it is from the other points.

A cluster is formed by merging data points based on distance metrics and the criteria used to connect these clusters.

It begins with all of the data sets combined into a single cluster and then divides those data sets using the proximity metric together with the criterion. Both hierarchical clustering and contentious clustering methods may be seen as a dendrogram, which can also be used to determine the optimal number of clusters.

This approach of clustering is one that is based on density. Some algorithms, such as K-Means, perform well on clusters that have a reasonable amount of space between them and produce clusters that have a spherical shape. DBSCAN is used when the input is in an arbitrary form, although it is less susceptible to aberrations than other scanning techniques. It brings together the data sets that are adjacent to a large number of other data sets within a given radius.

Density-based clustering, like DBSCAN, uses this strategy, but it takes a few more factors into account. In comparison to DBSCAN however, it has a greater computational burden. A reachability plot is also created, but it doesn't break the data sets into clusters. This may aid with the understanding of clustering.

In order to organize the data into groups, it first generates a summary of it. First, it summarizes the data, and then it utilizes that summation to form clusters. However, it is limited to just working with numerical properties that can be expressed spatially.

What Is the Difference Between Regression and Classification?

What Are the Different Methods and Applications of Clustering?

What Are the Different Classifiers and Applications of Classification?

The method of classification is applied for assigning a label to each class which has been generated as a result of classifying the available data into a predetermined number of categories. Two kinds of classifiers exist:

The categorization is carried out using more than just two unique classes in this instance. Categorization of the many kinds of soil, segmentation of musical genres, etc., are all examples.

What Are the Most Common Classification Algorithms in Machine Learning?

When it comes to natural language processing, classification is a job that is entirely reliant on machine learning techniques. Each algorithm has its own purpose, which is to solve a certain issue. As a result, each algorithm is deployed in a distinct location according to the requirements.

A dataset may be subjected to any number of categorization methods. The discipline of classification in statistics is quite broad, and the application of any single technique is entirely dependent on the dataset you are dealing with. The following are some of the most frequently used classification algorithms in machine learning:

Many analytical activities that would otherwise take hours for a person to complete may now be completed in a matter of minutes with the help of classification algorithms.

Simplilearn offers a Machine Learning certification course. This course on machine learning provides an in-depth introduction to several aspects of machine learning, such as dealing with real-time data, constructing algorithms utilizing supervised and unsupervised learning, time series modeling, classification, and regression. This online course in machine learning will equip you with the skills necessary to launch a successful career as a machine learning engineer.

Regression vs. Classification in Machine Learning for Beginners