Git vs GitHub: Difference Between Git and GitHub

Lesson 9 of 11By Simplilearn 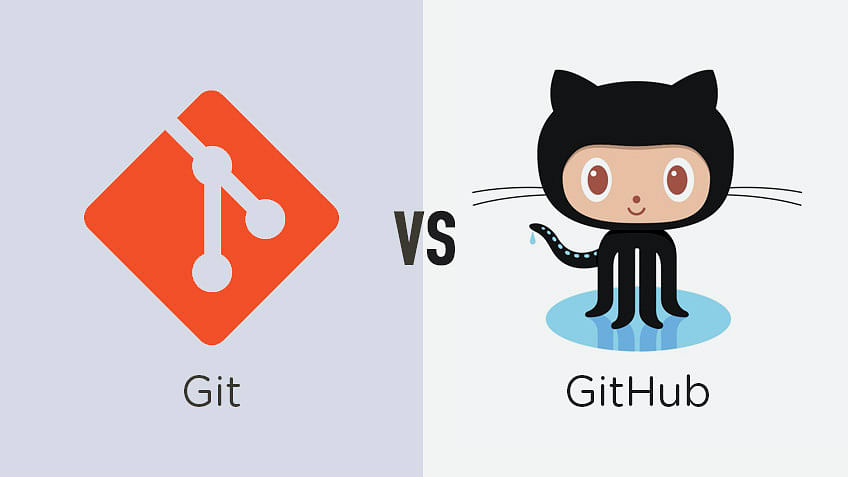 There’s a common misconception that someone could use Git or GitHub and have the same experience. But ask any developer, and they will tell you that these are two completely different entities. For one, they perform different functions and serve different purposes. They aren’t even owned by the same company (despite the name). So what are Git and GitHub exactly, and what is the difference between Git and GitHub as software tools and services?

GitHub is a collaboration and version control platform for storing and managing code. Using this tool, you can collaborate with others on projects from anywhere. This tutorial will explain what GitHub is used for and the differences between Git and GitHub.

Let’s dive into the Git vs GitHub discussion in more detail.

It is a free, high-quality distributed version control system suitable for tracking modifications in source code in software development. It was originally created as an open-source system for coordinating tasks among programmers, but today it is widely used to track changes in any set of files. The key objectives of Git are as follows:

It is a web-based Git repository. This hosting service has cloud-based storage. GitHub offers all distributed version control and source code management functionality of Git while adding its own features. It makes it easier to collaborate using Git.

Additionally, GitHub repositories are open to the public. Developers worldwide can interact and contribute to one another’s code, modify or improve it, making GitHub a networking site for web professionals. The process of interaction and contribution is also called social coding.

The main Git vs GitHub difference is in their functionality. While they both provide source code management (SCM) and make merging and sharing code easier, this is pretty much where their similarities end. Think of Git as a single computer and GitHub as a network of multiple interconnected computers, all with the same end goal but a wildly different role for how to get there.

At its core, Git is a free, open-source software distributed version control system (DVCS) designed to manage all source code history. It can keep a history of commits, can reverse changes, and lets developers share code. Each developer must have Git installed on his or her local device to collaborate. It is commonly referred to as one of the best DevOps tools to understand and use in the developer space, and it’s among the most widely used tools today. Companies like Amazon, Facebook, and Microsoft use it, to name a few.

GitHub, on the other hand, is a web-based hosting service for Git repositories. It offers all of Git’s DVCS SCM and has some additional features. This includes collaboration functionality like project management, support ticket management, and bug tracking. With GitHub, developers can share their repositories, access other developers’ repositories, and store remote copies of repositories to serve as backups.

They Work in Different Environments

Another difference in comparison of Git vs GitHub is that the environment in which they operate. Git is installed locally on a system, so developers can manage their source code history using their local machines as repositories. This means there is no centralized server required to use Git, and no needed internet access either. Additionally, there’s no user-management system available and a proprietary desktop GUI.

GitHub, meanwhile, lives in the cloud, so Internet access is required. It also has a built-in user-management system and a user-friendly GUI. In addition to its main website, GitHub features a desktop version that can be installed on local computers to help synchronize code. It should be noted that Git can be used without GitHub, but GitHub cannot be used without Git. (GitHub primarily was built to work correctly with Git.)

Git developers themselves perform a command-line tool where code changes like commit and merge within the Git tool on their own local devices. By contrast, GitHub provides its cloud-based graphical interface where these tasks are performed. The interface also offers developers access control, collaboration features, and various task-management tools.

When it comes to commands, Git focuses exclusively on SCM tasks like push and pull, commit, reset, fetch, and merge. GitHub, meanwhile, serves as a host for Git repository teams to store their code in a centralized location. While Git is a tool that’s used to manage multiple versions of source code edits that are then transferred to files in a Git repository, GitHub serves as a location for uploading copies of a Git repository.

In a sense, then, there’s no comparison when it comes to Git vs. GitHub as far as their function. They complement rather than compete with each other in this space.

Git has remained an open-source tool since it was first released in 2005. To this day, it is maintained by the Linux Foundation as part of the open-source ecosystem of tools and technologies (the Linux founder also created Git). By contrast, GitHub was launched as a company in 2008 and acquired by Microsoft in 2018.

They Have Different Competitors

While there are some advantages of Git as a DVCS, it does have some significant competition. This includes Mercurial, IBM, Subversion, and ClearCase. GitHub’s competition is wildly different due to its software-as-a-service (SaaS) focus and includes companies like GitLab and Bitbucket.

Demystifying the Differences Between Git and GitHub

Git version control system facilitates the management and tracking of source code histories. Git repositories are managed through GitHub's cloud-based service. You can use GitHub to better manage open-source projects that use Git.

The following table enumerates the key differences between Git and GitHub:

The Cost and Ownership of Git vs GitHub

Although the two are closely related, Git is open source software maintained by Linux, while Microsoft owns GitHub.

Git is an open-source platform – free to use, modify, and distribute. Contrastingly, GitHub follows a specific pricing model. It offers a free plan with all the core GitHub features for individuals. Its price model starts at $9 per user per month for teams. It also has enterprise pricing options for larger organizations that require advanced features.

How to Integrate GitHub and Git?

Take the following steps to use GitHub and Git together for version control:

Firstly, download the Git software and run the installer. Then set up Git using your command-line interface.

To connect Git to GitHub, you must add a repository(file location where the project gets stored) and make at least one commit (the command that saves new changes to a project in the repository).

Sign up for a free plan or invest in a paid plan. Also, GitHub offers discounts to students, nonprofits, and educators.

Once you have created your account, create a repository in GitHub for keeping your projects when you get them here from Git. Click on the link “Create a repository” in the left-hand sidebar.

Name the repository and select whether you want it to be public or private. Leave the “Initialize this repository with a README” box unchecked because you will be using an existing project.

Step 4: Push a Repository to GitHub

You will next have the option to add code to your repository. However, as you have already set up your Git repository, you can click the “push an existing repository from the command line” option:

Push an existing repository from the command line option

Use the clipboard icon to copy the commands, and paste them into your preferred command-line interface. After creating your GitHub repository, refresh the GitHub page. Your repository will appear on GitHub for you to start making changes.

Step 5: Pull Changes Back to Git

On GitHub, you can view all the changes made to your project. However, the platform doesn’t directly access your computer’s files. Keep projects updated on your computer by pulling your edits via Git. Entering git pull origin master into your command-line interface will serve the purpose.

How skilled are you in the latest DevOps tools? Try answering these DevOps Engineer MCQs and find out now!

Whether you’re entirely new to Git or GitHub or even want additional knowledge to advance in your career, you can find it through Simplilearn’s Git Training and DevOps Engineer Master's Program. Through these online, blended learning courses, you’ll gain a greater understanding of how Git and other DevOps are used, which can help you prepare for a new career or advance in your existing one. Enroll today to take your career to the next level!