HomeResourcesBig DataHadoop Tutorial: Getting Started with HadoopWhat is Hadoop? Components of Hadoop and How does it work

What is Hadoop? Components of Hadoop and How does it work 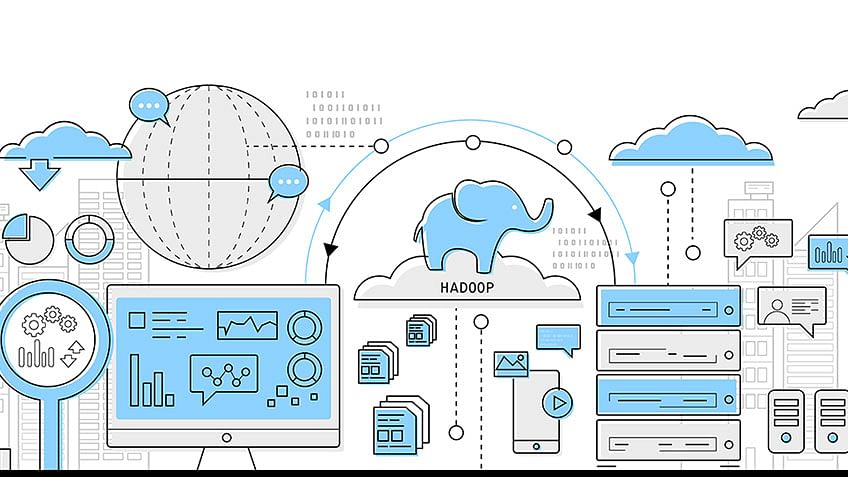 What is Hadoop?
Hadoop Through an Analogy
The Rise of Big Data
Big Data and Its Challenges
What is Hadoop?
Who Uses Hadoop?
Components of Hadoop
How Hadoop Improves on Traditional Databases
5 Advantages of Hadoop for Big Data
Hadoop Use Case
Challenges of Using Hadoop
Conclusion

Thanks to big data, Hadoop has become a familiar term and has found its prominence in today's digital world. When anyone can generate massive amounts of data with just one click, the Hadoop framework is vital. Have you ever wondered what Hadoop is and what all the fuss is about? This article will give you the answers! You will learn all about Hadoop and its relationship with Big Data.

Hadoop is a framework that uses distributed storage and parallel processing to store and manage big data. It is the software most used by data analysts to handle big data, and its market size continues to grow. There are three components of Hadoop:

Hadoop Through an Analogy

Before jumping into the technicalities of Hadoop, and helping you understand what is Hadoop, let us understand Hadoop through an interesting story. By the end of this story, you will comprehend Hadoop, Big Data, and the necessity for Hadoop.

Introducing Jack, a grape farmer. He harvests the grapes in the fall, stores them in a storage room, and finally sells them in the nearby town. He kept this routing going for years until people began to demand other fruits. This rise in demand led to him growing apples and oranges, in addition to grapes.

Unfortunately, the whole process turned out to be time-consuming and difficult for Jack to do single-handedly.

So, Jack hires two more people to work alongside him. The extra help speeds up the harvesting process as three of them can work simultaneously on different products.

However, this takes a nasty toll on the storage room, as the storage area becomes a bottleneck for storing and accessing all the fruits.

Jack thought through this problem and came up with a solution: give each one separate storage space. So, when Jack receives an order for a fruit basket, he can complete the order on time as all three can work with their storage area.

Thanks to Jack’s solution, everyone can finish their order on time and with no trouble. Even with sky-high demands, Jack can complete his orders.

The Rise of Big Data

So, now you might be wondering how Jack’s story is related to Big Data and Hadoop. Let’s draw a comparison between Jack’s story and Big Data.

Back in the day, there was limited data generation. Hence, storing and processing data was done with a single storage unit and a processor, respectively. In the blink of an eye, data generation increases by leaps and bounds. Not only did it increase in volume but also its variety. Therefore, a single processor was incapable of processing high volumes of different varieties of data. Speaking of varieties of data, you can have structured, semi-structured and unstructured data.

To address this issue, the storage unit is distributed amongst each of the processors. The distribution resulted in storing and accessing data efficiently and with no network overheads. As seen below, this method is called parallel processing with distributed storage.

This setup is how data engineers and analysts manage big data effectively. Now, do you see the connection between Jack’s story and big data management?

Big Data and Its Challenges

Big Data refers to the massive amount of data that cannot be stored, processed, and analyzed using traditional ways.

The main elements of Big Data are:

The main challenges that Big Data faced and the solutions for each are listed below:

Lets, understand what is Hadoop in details

As the years went by and data generation increased, higher volumes and more formats emerged. Hence, multiple processors were needed to process data to save time. However, a single storage unit became the bottleneck due to the network overhead that was generated. This led to using a distributed storage unit for each processor, which made data access easier. This method is known as parallel processing with distributed storage - various computers run the processes on various storages.

This article gives you a complete overview of challenges with Big Data, what is Hadoop, its components, and the use case of Hadoop. Let us, next dive, into the components of Hadoop and get a better understanding of what is Hadoop.

Hadoop is a popular big data tool, used by many companies worldwide. Here’s a brief sample of successful Hadoop users:

Now that we have some idea of Hadoop’s popularity, it’s time for a closer look at its components to gain an understanding of what is Hadoop.

Hadoop is a framework that uses distributed storage and parallel processing to store and manage Big Data. It is the most commonly used software to handle Big Data. There are three components of Hadoop.

Let us take a detailed look at Hadoop HDFS in this part of the What is Hadoop article.

Data is stored in a distributed manner in HDFS. There are two components of HDFS - name node and data node. While there is only one name node, there can be multiple data nodes.

HDFS is specially designed for storing huge datasets in commodity hardware. An enterprise version of a server costs roughly $10,000 per terabyte for the full processor. In case you need to buy 100 of these enterprise version servers, it will go up to a million dollars.

Hadoop enables you to use commodity machines as your data nodes. This way, you don’t have to spend millions of dollars just on your data nodes. However, the name node is always an enterprise server.

Master and slave nodes form the HDFS cluster. The name node is called the master, and the data nodes are called the slaves.

The name node is responsible for the workings of the data nodes. It also stores the metadata.

The data nodes read, write, process, and replicate the data. They also send signals, known as heartbeats, to the name node. These heartbeats show the status of the data node.

Replication of the data is performed three times by default. It is done this way, so if a commodity machine fails, you can replace it with a new machine that has the same data.

Let us focus on Hadoop MapReduce in the following section of the What is Hadoop article.

A data containing code is used to process the entire data. This coded data is usually very small in comparison to the data itself. You only need to send a few kilobytes worth of code to perform a heavy-duty process on computers.

The input dataset is first split into chunks of data. In this example, the input has three lines of text with three separate entities - “bus car train,” “ship ship train,” “bus ship car.” The dataset is then split into three chunks, based on these entities, and processed parallelly.

In the map phase, the data is assigned a key and a value of 1. In this case, we have one bus, one car, one ship, and one train.

These key-value pairs are then shuffled and sorted together based on their keys. At the reduce phase, the aggregation takes place, and the final output is obtained.

Hadoop YARN is the next concept we shall focus on in the What is Hadoop article.

Hadoop YARN stands for Yet Another Resource Negotiator. It is the resource management unit of Hadoop and is available as a component of Hadoop version 2.

Suppose a client machine wants to do a query or fetch some code for data analysis. This job request goes to the resource manager (Hadoop Yarn), which is responsible for resource allocation and management.

How Hadoop Improves on Traditional Databases

Understanding what is Hadoop requires further understanding on how it differs from traditional databases.

Hadoop uses the HDFS (Hadoop Data File System) to divide the massive data amounts into manageable smaller pieces, then saved on clusters of community servers. This offers scalability and economy.

Furthermore, Hadoop employs MapReduce to run parallel processings, which both stores and retrieves data faster than information residing on a traditional database. Traditional databases are great for handling predictable and constant workflows; otherwise, you need Hadoop’s power of scalable infrastructure.

5 Advantages of Hadoop for Big Data

Hadoop was created to deal with big data, so it’s hardly surprising that it offers so many benefits. The five main benefits are:

In other words, they were only able to analyze small amounts of data. But with a flood of customers coming in, there were so many things they couldn’t keep track of, which left them vulnerable to fraudulent activities

They began to use parallel processing. However, the data was unstructured, and analyzing it was not possible. Not only did they have a huge amount of data that could not get into their databases, but they also had unstructured data.

Hadoop enabled the Zions’ team to pull all that massive amounts of data together and store it in one place. It also became possible to process and analyze the huge amounts of unstructured data that they had. It was more time-efficient, and the in-depth analysis of various data formats became easier through Hadoop. Zions’ team could now detect everything from malware, spears, and phishing attempts to account takeovers.

Despite Hadoop’s awesomeness, it’s not all hearts and flowers. Hadoop comes with its own issues, such as:

Got a clear understanding of what is Hadoop? Check out what you should do next.

Looking forward to becoming a Hadoop Developer? Check out the Hadoop Certification Training Course and get certified today.

Hadoop is a widely used Big Data technology for storing, processing, and analyzing large datasets. After reading this article on what is Hadoop, you would have understood how Big Data evolved and the challenges it brought with it. You understood the basics of Hadoop, its components, and how they work. Do you have any questions related to what is Hadoop article? If you have, then please put it in the comments section of this article. Our team will help you solve your queries.

If you want to grow your career in Big Data and Hadoop, then you can check Big Data Engineer Course.