HomeResourcesBusiness and LeadershipMBA Preparation: Everything You Need to KnowBest Country to Study Abroad

Why Do an MBA? The Top 6 Reasons to Opt For an MBA Program

Your Complete Guide for CAT Preparation

Top Six Leadership Skills That You Should Master for Workplace Success

Here’s All You Need to Know About MBA in Finance

The Art of Saying No: The Best Guide to Reclaim Control Over Your Productivity

A Thorough Look Into the Field of Asset Management

The Top Resolutions for 2022 That You Should Make

A Comprehensive Look at What Business Process Management Is

A Look at the Top 10 Best Indian Startups 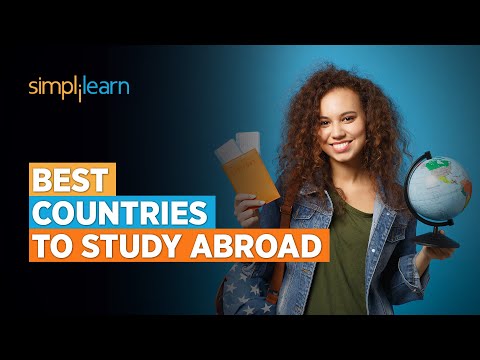 Thousands of students from all over the world study in countries other than their own for a variety of reasons. Many of them cite job advancement, higher pay, and lifestyle changes as reasons for travelling to foreign countries. However, making this decision to study abroad is not that easy. You will have to carry out thorough research about which country is best suited for you and what prospects it has to offer. So, with this ‘Best Countries to Study Abroad’ article, we will explore the factors commonly referred to while choosing the best study abroad destination.

MBA With IU and LSBU

Study in Germany and get a dual degreeEnroll Now

Selecting the best study abroad destination is not an easy task. You will have to look into many factors to conclude which country best suits you. Here, we will discover the four most commonly referred factors to formulate a list of the best countries to study abroad.

For example, the United States is one of the most popular destinations for students across the globe. The reasons behind that are the high-quality education, world-class faculty, and cutting-edge infrastructure it has to offer. According to QS World University Ranking report, the United States is considered to have a better educational system since 28 universities from this country rank among the top 100 universities worldwide.

Cultural acceptability is a major concern for students who wish to study abroad. Everyone faces the difficulty of assimilating into a completely different environment, culture, traditions, and customs. Despite putting in a lot of effort to learn about the culture, acceptance remains a big aim for most individuals.

Students have recently been sceptical about nations such as Australia, the United Kingdom, and Italy due to the previous incidents of racism and anti-immigrant sentiments. According to a poll conducted by Australia's human rights department, 85% of respondents say racism is the most serious contemporary issue in the country. The same thing remains true in the United Kingdom as well. Events like Brexit and anti-immigrant sentiment in the UK have led to apprehensiveness among students studying abroad.

Aside from that, students are wary about nations such as France, even though it is a top study destination, since the major university programs in this country are taught in French.

Budget is the most important criterion when it comes to selecting the best countries to study abroad. Students on a tight budget always ponder upon Germany as an option because of its zero tuition fee policy. However, admission to any of their public universities is difficult due to the fierce competition it brings to the table. Secondly, Nordic countries are also considered cost-effective study destinations for overseas students. Countries such as Norway and Poland are open to all citizens, regardless of their point of origin. And you will only have to pay for a few specialised courses in these countries.

Return on investment is a simple ratio that divides an investment's net profit or loss by its cost. You can compare the efficacy or profitability of your investment with ROI as it is represented in the form of a percentage.

In the context of abroad education, ROI refers to the amount of time required to recoup your investment. Let’s look into the scenario of Masters in the US and Europe to understand the term ROI better. European universities typically provide a one-year master's degree, whereas American institutions offer a two-year master's degree. This means that studying in Europe is unquestionably less expensive than in the US, as you will just have to pay one year’s expenses. Germany, for example, might be the best choice if the goal is to maximize the return on investment since this country offers free education to international students.

Ireland is another country that has recently gained popularity. Ireland provides a one-year master's program and has become the European IT capital, motivating many students to pursue further education in the country.

Moving forward in this best countries to study abroad article, we will dive into our list of top four study destinations.

Based on the factors mentioned above, we have compiled a list of the four best countries to study abroad across the globe. Let’s start with the number 4.

Australia promotes innovation, creativity, and independent thinking throughout its universities. International students in Australia say their education is challenging, enjoyable, and gratifying. Besides that, eight of Australia's thirty-nine institutions rank among the top 100 institutes globally, according to the QS ranking report 2022.

The top five universities to study abroad in Australia are:

That’s not the end of your expenses; you will also need to consider living expenses. In Australia, the average monthly living expenditure is around 4000 Australian dollars. According to the reports, the cost of living in Australia is over 15% more than the United States. It is ranked tenth among the most expensive nations to live in, prior to the United Kingdom and the United States. This country is not the best opt for students on a tight budget. That is the reason why we have Australia as the fourth contender.

The United Kingdom boasts the greatest education system, including undergraduate, postgraduate, and doctorate degrees. UG courses are meant to provide students with hands-on experience. After finishing the three years of UG courses, learners can pursue a master’s. Master programmes in the UK typically last for two years and provide more in-depth knowledge about a specific discipline enabling students for high-paying employment and promotions.

If we talk about overall expenditure for studying in the UK, let us tell you that the UK is one of the most expensive nations to persue studies. Tuition costs in the United Kingdom average roughly 13,050 euros while living expenditures average around 10,308 euros. This indicates that the blocked account fund for a year's expenses will be the total of both of these values, which turns out substantially large.

However, the quality of education and compensation after finishing a degree in the UK is really great. You can recover your financial assets within a minimum amount of time.

The United States rank second on the list of our best countries to study abroad. MIT, Stanford, Harvard, the University of Chicago and the University of Pennsylvania are the top five American universities ranking among the top 15 global institutions. For decades, the United States has reigned supreme as the most popular study abroad destination. The country's elite schools dominate worldwide university rankings, attracting students from all over the world who are ambitious for academic success.

According to the Project Atlas report, over 1.1 million international students reside in the United States. The reasons for this include the country's immigration policy and cultural acceptability. After finishing their education, overseas students are allowed to stay and work in the United States for 12 months. Furthermore, for students pursuing STEM education, the period is 24 months. If you get employed quickly, you can also apply for the H1B VISA, which allows you to work in the US for a duration of 6 years. Indians are the most common recipients of H1B visas; more than 60% of these visas are issued to the Indian community.

Now, let's talk about the finances for studying in America. The cost of living and tuition is significantly greater here. To enrol in the university program, you will need to spend an average of USD 35,331. In addition, the average cost of living is approximately 18,000 US dollars, which is pretty costly.

However, many students prefer the USA since the job opportunities here are quite lucrative and as high as possible. Many students cite that they fulfilled their education loans within a 2-3 year timespan. This indicates high returns on investments in mediocre time.

Germany is at the top of our best countries to study abroad list. Germany has abolished all tuition costs for both national and international students, making education more accessible.

In Germany, there are around 430 public universities that provide free education. These colleges will only charge you 500 to 600 euros every semester for administrative costs, commonly referred to as Semester contributions. This semester contribution covers travel expenditures, student union fees and examination charges.

The next benefit of Germany as a study destination is the lower blocked funds. These funds serve as a confirmation that you have enough money to pay at least one year's worth of living expenditures. This price is smaller because there is no tuition cost in Germany. You will just need to present the whole of your one-year living costs, such as rent, internet, food, and so on. Considering inflation, the obligatory amount required in the Blocked Account for pursuing studies in Germany as of January 1, 2022, is €10,332 for the whole year or €861 per month.

However, you do not need to be concerned about these costs because German legislation permits you to work 20 hours per week and nearly 120 full days per year. This will not necessitate any form of authorisation. In addition, master's degrees in Germany are normally one year long, which means you will only be required to pay fees for one year. Later, by launching and succeeding in your job hunt, you will be able to begin earning and repaying your education debt. In short, you will have speedy returns on investment.

Germany is the fourth-largest economy globally after the United States, China, and Japan and is the largest economy in the eastern European continent. As a result, there are numerous career opportunities for overseas students with technical expertise. However, in order to be considered for these positions, you must be fluent in German. B1 level of language proficiency is the bare minimum before you can look for any permanent jobs here in Germany.

Most working professionals opt for MBA to grow in their respective careers. Kickstart your career with our Global MBA with IU, Germany.

In this ‘Best Countries to Study Abroad’ article, you discovered the factors that you should look into before making a decision about the study abroad destination. After that, you went through the list of the top four study abroad destinations based on the parameters covered in this article. If you don’t have the finances to pursue the education, we strongly recommend you to discover Post Study Work VISA programs available online.

Simplilearn offers one such program, which is a blended (online + offline) business management program in collaboration with IU, Germany. This program will allow you to explore Germany as a study destination. With this PSW program, you can now take advantage of the best that IU offers: a study on campus, establish an international management career and work in Germany. You can become a worldwide management industry leader with this MBA course from IU Germany and London South Bank University. In addition, if you complete this course, you will be allowed to start a job in German firms with an 18-month post-study work visa.

If you have any queries or need clarification on any section of this ‘Best Countries to Study Abroad’ article, please leave them in the comments section below; we will respond to them soon.