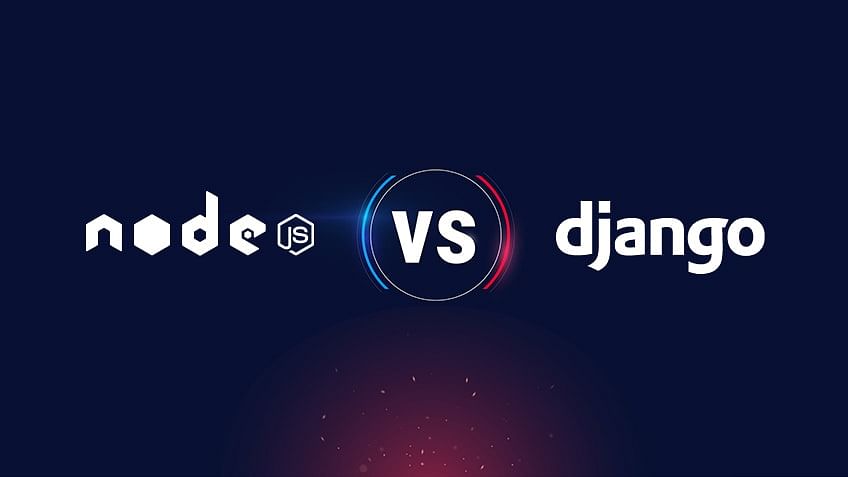 While tech leaders across the globe are going gaga about Node Js and Django, the million-dollar question that comes to our mind is – What is so special about these two technologies for web app development? Node Js and Django are two open-source frameworks that allow you to effortlessly develop fast and scalable web applications. These tools have an excellent user interface, come for free with no license requirement, and have a huge number of users.

The popularity and all-round performance of Node Js and Django make it difficult for developers to decide which tool to use for their projects. This article aims to give a detailed comparison of Node Js Vs. Django, to help understand how these are different from each other.

For a start, Node Js is JavaScript-based and used for developing server-side and networking applications. Django, on the other hand, is a Python web framework that helps build better web applications in quick time and with less code. These versatile tools take care of all major hassles of web development, so developers can focus on bringing their projects to life.

Before we get started with Node Js vs. Django, let’s first understand What Node Js is?.

What is Node Js?

So much so that global giants like Netflix, Paypal, Walmart, eBay, and Uber use Node Js as the primary backend language.

It is important to study the architecture behind the technology in order to have a clear understanding of what is Node Js. Every browser has its own JavaScript engine that converts JavaScript into machine code. For instance, Firefox uses spidermonkey, and Google Chrome uses V8. Before Ryan Dahl developed Node Js in 2009, JavaScript could only be run in the browser. Dahl took the V8 Engine, embedded it within a C++program, and named it Node.

With Node, JavaScript can run outside the browser. The tool allows users to control file systems by creating and deleting folders, query databases directly, and build web servers to serve data. The V8 engine is embedded within both Node and Chrome, but each provides different run time environments that let users access different objects or tools to leverage different functions.

Over the years, Node Js has gained immense popularity and is used by industries for:

Node Js is part of a robust tech stack and is used regularly by Fortune 500 companies.

Node Js applications are written in JavaScript, which is still one of the most popular programming languages. Employers across industries prefer developers with adequate knowledge of JavaScript, as it powers the top client-side frameworks in the world. Knowledge of Node Js ensures high pay packages because employers are looking to implement JavaScript on the front-end and backend.

Django is a high-level Python-based web framework used for the rapid development of secure and pragmatic applications. It is another very popular web development tool, preferred for the simplicity, flexibility, reliability, and scalability it offers. Django is free-to-use and open-source, boasts of a thriving community of users, and there are many options for free and paid-for support.

Django works on the rapid development principle, taking applications from concept to completion extremely fast. It enables developers to do multiple iterations at a time without starting the entire schedule right from the beginning. The tool also allows developers to use existing code, thereby making their work simpler.

Django is a great choice for companies and projects that require handling large volumes of content, user interfaces or manipulate complex functions or technology.

Django is based on MVT architecture for web application development. The structure has three parts:

Now that you have a comprehensive idea of what is Django, let’s find out what it is used for.

Although Django was initially created to boost a web application for a newspaper publisher, its use is by no means limited to the publishing industry. It is used to build projects like:

Django is used by a cross-section of companies varying in size and goals. In the web development field, Django is a sought-after skill in the job market. Python is a great language for web application development. There are many online courses on Python and Django framework for web development.

Now, we know what Node Js and Django are. Moving forward, let’s have a look at Node Js Vs. Django in detail.

Two powerful tools for building web applications, Node Js and Django, are unique in their ways. Here’s a comparison between Node Js Vs. Django, based on various factors that set them apart.

While Node Js is based on a “JavaScript everywhere” principle and uses JavaScript on both server and client sides of web applications, Django relies on a “framework for perfectionists with deadlines” to help develop applications super fast.

Both Node Js and Django are free to use and without licensing requirements. They are open-source, allowing users to contribute to the projects as and when there are features or bugs that need your attention.

Node Js being a JavaScript runtime environment, you need to have a good understanding of asynchronous programming, native methods of Node, and its architecture to be able to work with the tool. There are many online certifications of Node Js that can help you build network applications quickly and efficiently. Django is a Python framework, and you need to understand the methods and features of the technology to work with it.

Since Node Js simply uses JavaScript outside the browser environment, the syntax is quite similar to JavaScript. Plus, Django, being built on Python, uses Python syntax too. However, the Django framework also requires using a particular structure that conforms to the MVT architecture.

Another key factor in Node Js Vs. Django is their scalability and performance. Both rank high in this category, but Django performs better in terms of scalability. Node Js, on the other hand, outshines Django in performance. However, in CPU-intensive conditions, Node Js is not a good choice due to its single thread working.

Node Js and Django have huge user communities as both are great for building web applications. For Node Js, developers make full use of the server-side approach of JavaScript to work on the back end of web applications. In the case of Django, the easy-to-use syntax of Python makes it a favorite choice. More companies tend to implement Node as their backend web technology as compared to Django; hence, in terms of popularity, Node Js is the clear winner.

There are various online courses on full stack web development certification to boost your career as a developer.