Lesson 3 of 31By Chinmayee Deshpande 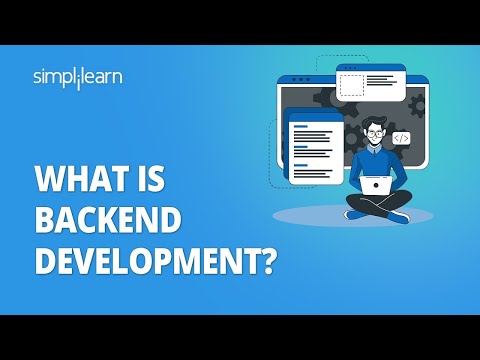 No one today can live without applications. From sharing pictures with your loved ones to ordering food, to making bank transactions, applications are used all the time. These applications generally provide an easy and seamless user experience, but have you ever wondered how? All the credit goes to the backend of the application that does all the essential tasks that you don't see.

This tutorial on backend development introduces you to the backend of an application. Here's what is covered -

Now that you know what’s in store for you, keep reading.

Web development activities that are done at the back end of programs are referred to as back end development. Back-end development covers server-side web application logic and integration and activities, like writing APIs, creating libraries, and working with system components instead of frontend development, which focuses on customer-facing services and programs. Backend developers build code that allows a database and an application to communicate with one another. Backend developers take care and maintain the back-end of a website, Including databases, servers, and apps, and they control what you don't see.

Who Is a Back End Developer?

Now that you’ve gotten an introduction into what is backend development, it is important to also understand what the role is all about. A backend developer's job entails focusing on website architecture, scripting, and writing code that communicates between the website’s database and the user's browser. Data consistency and integrity must be ensured.

You will cover the responsibilities of a backend developer in the coming sections, so keep reading.

Not everybody can become a backend developer. A specific skill set is crucial. Let’s look at some of these skills.

Next step in understanding what is backend development is knowing the wide array of skills that are needed to be successful as a backend developer today;

A backend developer creates code that does relational mapping to retrieve data from a database. MySQL, PostgreSQL, SQL SERVER, MongoDB, and Oracle Database are some of the most widely used DBMS. It's crucial to have a good understanding of how they work.

Proficiency is essential not just for day-to-day tasks, but also for developing solutions alongside frontend developers.

A backend developer creates code that does relational mapping to retrieve data from a database. MySQL, SQL SERVER and PostgreSQL, MongoDB, and Oracle Database are some of the most widely used DBMS. It's crucial to have a good understanding of how they work.

Version control systems aid in the management of project files and the tracking of the user's whole history. Git, GitHub, and Subversion are some of the most popular ones.

Git aids in the management of project files. It maintains track of everything the user has worked on in the past. GitHub is a web-based version control service using Git. The user can examine other people's code, spot errors, and even suggest modifications.

Web hosting solutions enable you to place your product on a cloud service provider and access it via the internet. Amazon Web Services(AWS), Google Cloud Platform(GCP), Microsoft Azure, and Heroku are all popular options.

A backend developer should, of course, have non-technical skills such as problem-solving, critical thinking, effective communication, and analytical abilities. It is important for a backend developer to also be able to work both as part of a team, and independently.

Let's take a look at the primary responsibilities now that you're familiar with the skills.

Back End Developer Roles and Responsibilities

Now that you’ve gotten a more detailed understanding of what is backend development, it is time to explore some popular and in-demand job roles in this field.

Some of the popular Backend developer roles are as follows-

Now you will walk through the salaries for backend developers.

The average salary of a backend developer in the US is around $102K/yr.

The average salary of a backend developer in India is around 7.23lakhs/yr.

Ranked No.1 Best Coding Bootcamp, our Post Graduate Program in Full Stack Web Development, can help you accelerate your career as a software developer. Enroll today!

Now that you know what is backend development and the necessary skills needed to become a Backend Developer and what responsibilities the roles come with it, you must be wondering where to begin. Well, look no further.

The Post Graduate Program in Full Stack Web Development by Simplilearn will teach you all you need to know about full-stack programming. This full-stack Java development course is designed to provide you with a thorough understanding of front-end, middleware, and back-end Java web developer technologies. This program will teach you how to construct an application from start to finish, how to test and deploy code, how to store data in MongoDB, and much more.

Please leave a remark in the comments section if you have any feedback or questions. We'll get back to you as soon as possible!

Q1. What is the backend engineer’s salary?

According to AmbitionBox, the backend developer salary in India ranges between ₹ 2.0 Lakhs to ₹ 19.8 Lakhs. The average salary is ₹ 5.5 Lakhs.

Q2. Which language is best for backend development?

Python is the most widely used programming language by backend developers. It is the most powerful and best multi-purpose language for data analysis and web development. However, you must also have knowledge of C#, Java, and  PHP.

Q4. What is the difference between frontend and backend development?

Backend development focuses on a site’s structure, data, system, and logic. Whereas frontend development deals with the visual aspects of a website, i.e., the part that users see and interact with. If these go hand in hand, visually pleasing websites can be created.

Q5. Which language is best for the backend?

Python is the fastest and most widely used language for the backend. It is simple and easy to learn and use. Many beginner programmers are now learning Python to deal with software development.

Q6. What is required to be a backend developer?

You need a computer science degree or equivalent to kick-start your career as a backend developer. Having a higher skill set in Python and other programming languages can help you get an edge over fellow programmers to grab the job of your choice.

SQL is the most common backend language. It is used to interact with databases and to create and maintain relational databases.

Q8. What are backend developer skills?

It is mandatory to have a basic understanding of the structures, algorithms, and processes used to implement and display the data. Since backend development is data-driven, you need in-depth knowledge of binary search, hashcode, data sorting, lists, queue, and implementations as a backend developer.