HomeResourcesSoftware DevelopmentWhat is a dApp? All You Need to Know

What is a dApp? All You Need to Know 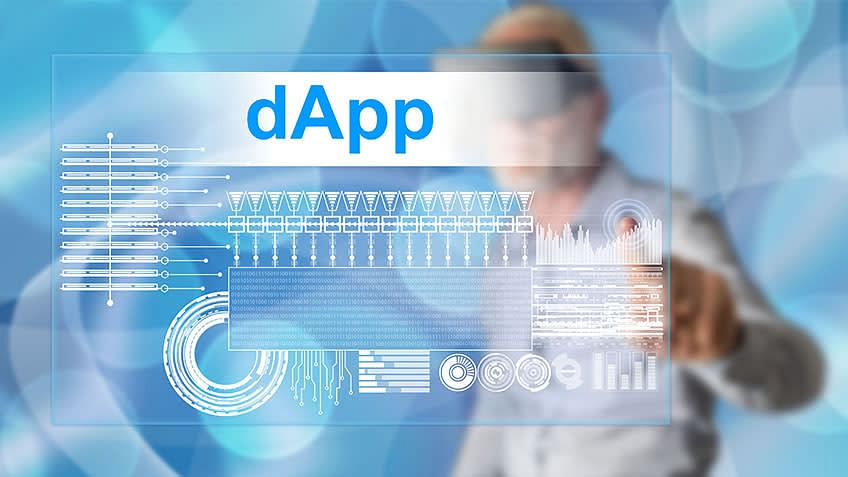 The idea of blockchain and its ecosystem are not new anymore. The blockchain space has witnessed major growth and innovations, one of which is dApps. Anyone who keeps up with the latest development in the blockchain space would be familiar with the term. dApps generally make use of Ethereum and they have various components that ensure the application works as intended.

There are several elements that make them very different from your traditional centralized applications, and some of these elements also make them a better choice as opposed to their conventional counterparts. Creating a well-designed dApp requires a good understanding of its features, uses, benefits, and the sectors that it can be used for. If you’re looking for answers to questions, such as what is dApp, how it works, and the advantages and disadvantages associated with it, here is everything you need to know.

What Is a dApp?

dApps, which is the abbreviation for decentralized applications, are programs or digital apps that run on either blockchain or a peer-to-peer network of computers. These applications are essentially decentralized to a great extent and cannot be controlled by a single authority. While similar to other software applications in terms of visual aspects, they are P2P-supported, which makes them different. dApps are built for various purposes, such as finance, gaming, and social media among others, and Ethereum is the common choice of platform for building dApps.

How Do dApps Work?

dApps have certain underlying characteristics, which define their way of working. To begin with, they are open source, which means every change made to a decentralized application is first decided by a consensus of a major number of users. Therefore, the codebase of the application is made available to all the users for evaluation. Likewise, they have a peculiar feature that they provide decentralized storage, which uses decentralized blocks for storing data.

dApps are stored on a blockchain system, and their execution also takes place on such a system, which is generally Ethereum. The validation of these apps is carried out using cryptographic tokens. Therefore, one would need these tokens to access the decentralized application.

While decentralization is the primary trait that differentiates a dApp from conventional applications, there are certain aspects that are common and responsible for the functioning of dApps and their conventional counterparts. Much like other apps, dApps make use of front-end codes to create a web page. However, their back-end codes are different as the code of this nature depends on the decentralized P2P network to run. These back-end codes are the reason why decentralized applications cannot be controlled by a single authority.

Yet another aspect that is different about dApps in terms of their working is that they are supported by smart contracts, unlike traditional applications that require the support of centralized servers and databases. These smart contracts are used for enforcing rules set forth using codes for the purpose of mediating transactions. They are stored on a blockchain. A small contract is just a small part of the whole application and it is a set of back-end codes. Therefore, you require a combination of several smart contracts along with third-party systems for the front end for a decentralized application to function.

Smart contracts run on a blockchain, a ledger of data records stored in blocks. These blocks of data are spread across distributed locations, and cryptographic validations rule and link these data blocks.

Why Use a dApp?

There are a number of reasons why using dApps can be more beneficial as opposed to using a conventional application, one of them being decentralization. Decentralization prevents the control from being completely given to a single authority and instead has each stakeholder involved in the decisions. Additionally, there is a lack of third parties as dApps use smart contracts, which are an innovative solution.

dApps have the ability to uncomplicate various processes. For instance, certain applications used for transactions may charge you a certain amount if you need to move your funds to a bank. Moreover, it might also take a few days for the transaction to be made. However, when you send money using a decentralized app, there is little to no cost incurred in the process. Additionally, the transaction is also instant. This means you can save time and the amount of money otherwise wasted on paying for the transaction.

Since dApps are decentralized, they are not prone to cyber threats and attacks as they don’t use a physical device for functioning, which are generally the target of attacks. Therefore, these networks are more secure and don’t suffer downtime. You can access decentralized applications at any time.

dApps are applicable to a wide range of industries, such as gaming, governance, finance, medicine, and even file storage, which is also a good reason to use them. However, as already mentioned, despite the differences in the backend operations, the way dApps work and the experience are almost alike.

Pros and Cons of dApps

dApps have both advantages and disadvantages associated with them. Knowing both their pros and cons can help have a more holistic understanding of their useability. Here are the pros and cons of decentralized applications.

Being one of the fastest growing sectors in the blockchain space, there are plenty of dApps that have evolved quite a lot. With that said, here are some popular examples.

The Future of dApps

dApps have just made it to the blockchain space. Despite being a relatively new technological advancement, they’ve recorded quick growth and have evolved significantly. dApps are becoming a part of a growing number of industries and offer multiple benefits, which make them a lucrative choice.

Since companies implement blockchain solutions for a variety of sectors, this might also indicate the rise in the popularity of dApps. There are two changes that are likely to occur in the future for dApps. There are chances that we might witness more stablecoins and the use of innovative price-stabilizing mechanisms.

1. What makes a dApp decentralized?

A decentralized app, unlike a centralized app, is not owned by a single company. Instead, it operates on a peer-to-peer network or a blockchain ecosystem. Therefore, users do not have to rely on a central authority to engage in transactions and can instead do so with each other directly. Decentralized applications require the users to pay in cryptocurrencies for downloading the source code of the program, which is a smart contract. This also ensures completing transactions without having to reveal personal information.

2. What are the components of dApp?

3. Can you make money with dApps?

You can make money using dApps in several ways. One of the most common ways of monetizing dApps is through crowd sales and token launches, which involves identifying the main functionality of the app and distributing profit to the token holder by providing access to the network. You can also charge transaction fees to avail of your services, which can help you make profits using your dApp. Yet another way to make money with dApps is by adding certain functionalities to your application that are premium and require to be paid for in order to avail of those services or features. Finally, depending on the nature of your application, you can charge people for memberships or subscriptions.

4. What language are dApps written in?

There is a range of blockchain languages that are used for writing dApps, and some of the common ones include Solidity, Powershell, C++, and JavaScript.

dApps are gradually increasing in popularity since their true potential is clearly visible to people and enterprises. They are constantly evolving to make them highly functional and to add features to them that enhance their application. With a combination of innovation, creativity, and technology, dApps are being created to suit different sectors and enterprises.

Understanding how dApps function and creating them requires a good understanding of the blockchain ecosystem since it is an important component in developing a dApp’s backend. With increasing applications of blockchain technology, there has also been a rise in careers and demand for blockchain experts who can tap into the potential of the system and come up with innovations such as dApps. Well-planned courses like Simplilearn’s Blockchain Developer Bootcamp can help individuals learn the basics of blockchain and develop skills that can contribute to further advancements in this direction.