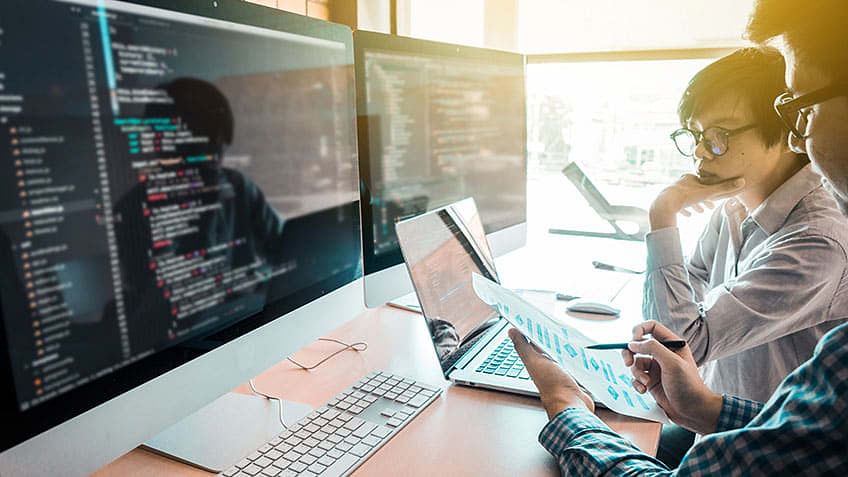 With so many programming languages in use, professional and aspiring developers often find themselves in a fix when deciding which language to focus on to direct their careers.

Among all languages, Python had a dream run in 2020, ranking as the most popular language for people to learn. Reports suggest Python triggered a 27% higher interest among developers last year compared to the previous year.

A top choice for data science and machine learning applications, Python, is now the second most popular programming language in the Tiobe index, having overtaken Java in popularity.

Let’s go over what makes Python so popular, what is python used for, the practical applications of Python, and discuss tips to start a career in Python.

Why is Python so Popular?

Python is a powerful, high-level programming language that can be used for web development, operating systems, AI, machine learning, numerical computing, mobile applications, and game development. The recent surge in the use of Python is largely due to its simple syntax and ease of use, which makes it relatively easy to learn even by beginners and non-programmers.

Python was originally developed by Guido Van Rossum in the early 1980s and continued to be used in a wide variety of domains in the tech industry. With the introduction of Python 2.0 in the early 2000s, the language evolved into its modern form while retaining its basic operational principles. Python uses object-oriented programing, which is perfect for large-scale applications of Python as well as for small programs.

The robust standard library of Python makes it perfect for building entire operating systems. The object-oriented design of the language ensures large projects are easily managed. Python is compatible with most operating systems and can be easily used to build native applications for Windows and Mac computers.

Python offers several choices for complex web development projects. HTML and JavaScript are the main languages used to build the front end of an application. But Python-based web frameworks like Django, Pyramid, and Flask are used to handle backend or server-side functionality of sites and services like Spotify, Reddit, and Mozilla. Giant platforms like Google and YouTube depend largely on Python for critical infrastructure.

The standard library of Python also supports many Internet protocols like HTML and XML, JSON, Email processing, FTP, and IMAP.

Just like for web development, Python offers an array of tools and libraries for game development. Would you believe, Battlefield 2 – one of the most popular shooting games of the early 2000s, was developed with the use of Python.

The Python ecosystem offers numerous tools and libraries that help scientists and researchers in scientific and numeric computing.

The hottest buzzwords of the decade – Artificial Intelligence (AI) and Machine Learning are mostly about algorithms, code, and logic. Python, along with a few other programming languages, is increasingly being used for developing AI and ML-powered solutions. The scope and power of Python, along with its stability and security, make it ideal for running AI and ML systems.

Some important libraries for the job are:

Python is an excellent choice for desktop GUI (Graphical User Interface) programming. The language offers numerous options for developers to build a fully functional GUI. The comprehensive syntax and modular programming approach of the Python framework help create a super-fast and responsive GUI.

Some prominent applications of Python tools for GUI development are PyQt, Tkinter, wxWidgets, Python GTK+, and Kivy. Standard applications like Dropbox and BitTorrent are primarily written in Python.

Applications of Python also include building ERP and ecommerce systems. Business applications are different from typical consumer software because they offer a set of specific features instead of a variety of features. Besides, they target a very tight-knit user group, usually an organization.

Python is perfect for delivering best-performance custom solutions for business applications as well as consumer applications.

Why Use Python in Web Development?

Technology giants such as Spotify, Instagram, and Google use the open-source, easy-to-understand Python programming language for developing enterprise-level, robust, and responsive web applications.

Packaged to expedite installation, the ActivePython software, with a comprehensive set of extensions, allows Python developers to start working with state-of-the-art Python frameworks such as Tornado, Django, and Flask within minutes.

Integrating the Python programming language, the ActivePython software package, offered via the ActiveState Platform, also permits users to connect to AWS (Amazon Web Services) API and SDK libraries. This heightens the appeal of the software, making it the preferred choice for web developers around the world.

Now, before we learn what is Python used for, here are the top advantages of using Python in web development.

Python is Easy to Learn

Compared to other programming languages like C++ or Java, the design philosophy of Python - emphasizing general expressions and code readability with significant use of whitespace - makes the programming language easy to understand, even for beginners. Additionally, developers using Python can get their job done by writing much less code.

Python Has a Rich Ecosystem

The extensive Python library offers a wide range of packages and tools, such as SLQALchemy, Pygal, Pandas, and Numpy, which allow developers to access pre-defined code, ensuring fast and smooth application development.

In comparison to programming languages like C++ or Java, Python reduces the development time to a great extent, making things easier for developers to build prototypes quickly and gain feedback on their projects.

The Defense Advanced Research Projects Agency (DARPA) of the U.S. Department of Defense, which is responsible for promoting technology development for U.S. military use, funded $3 million in 2012 to build a top-notch data processing and data analytics library for Python.

With this high investment, the Python programming language now includes a variety of advanced tools and scientific packages for all facets of data science and scientific computing.

Including APIs, simple syntax, and outstanding features to address statistics, scientific, and mathematical functions, Python, according to seasoned developers and engineers, is best suited for scientific computing and data science.

With scientific computing and data science at its core, NumPy provides support for large-scale, multi-dimensional matrices and arrays with a range of first-rate mathematical functions.

Working together with the NumPy arrays, SciPy facilitates powerful routines for optimization and numerical integration.

Uses of Python in Machine Learning

AI and ML applications differ from customary software projects, especially in the overall technology infrastructure, the necessity for deep research, and the skills needed for AI-based projects.

ML and AI applications, therefore, require a high-class programming language, which is steady, yet agile, offering consistency and simplicity.

From project development to implementation and maintenance, the Python programming language, with its excellent frameworks and vast libraries, gives all of that, and more.

What is Python Used for in Startups?

The startup ecosystem is entirely different from how corporations and big companies operate.

Startups are innovative, young, and collaborative. They are also highly vulnerable, as most startups, in the initial stage, are not quite sure about whether the target audience will accept and appreciate their offerings.

Taking into account all the above factors, experts opine that the Python programming language is ideal for technology-driven startups. Here are some examples of how startups can benefit from Python software:

Startups will grow over time, and eventually, they will seek scalability. Based on Python, the open-source and free Django web framework can help startups develop highly-scalable mobile and web applications, capable of handling huge traffic loads.

The exceptionally versatile Python programming language works well on various platforms. With Python, startups can develop applications that everyone can access easily.

Python allows startups to develop MVPs in a flash, reducing the time-to-market. This gives a leading edge in an intensely competitive business environment.

What is Python Used for in FinTech and the Financial Industry?

The high-caliber programming language is excellent for Fin-Techs, when it comes to resolving challenges inherent in today’s financial landscape, in terms of regulation, compliance, analytics, and data volume.

As stated in HackerRank’s survey, an increasing number of financial institutions are now using the Python programming language to build futuristic finance applications. Here are the top factors that drive What is Python Used For in the financial sector -

Developed under OSI-approved open and flexible license, Python is a freely distributable and usable software that offers a broad range of toolsets and libraries for the financial industry.

All operating systems, be it the Mac OS, Linux, or Windows, can run the Python programming language.

How to Build a Career in Python

Python is the ‘next Big thing’ and a “must” for professionals interested in coding. Developers need to add Python to their resumes, not only to do faster programming but also for lucrative global careers.

So, if you are wondering how to start out with Python or how to become a Python developer, here are a few ideas for you to get started.

There are few coding languages as straightforward and versatile as Python. Any interested individual can learn Python, but an aspirant from a computer science or engineering background is desired for a job as a Python developer. A degree in science or engineering along with a Python certification and a complete project using Python can help you secure a well-paid job in Python development or data sciences domain.

There are many online certifications and bootcamps for learning Python if you want to make a career in data science. Consider the Python training course from SimpliLearn – the online bootcamp experts that can help you master the basics or develop some more specific Python skills.

Some popular Python-oriented Job roles are:

To build or advance your career with Python programming, you need to have the following skills:

Professionals that learn and code in Python face a huge demand in today’s job market, which explains the high salary and bonuses that Python developers and programmers earn. By upskilling yourself with the knowledge of this highly popular and practical programming language, you can gain well-paid skills and land high salaried jobs.

Talent’s UK average for a python developer salary is £55,000 per year.

In India, an average Python developer can draw over ₹ 6 Lac per year, according to Indeed.com.

Besides the base salary, many companies offer perks and bonuses, making Python-oriented jobs a lucrative one.

From NASA to Facebook, and from Google to Instagram – leading technology giants all over the world use Python as a programming language for a wide variety of applications. Naturally, there’s a high demand for skilled Python professionals.

As Python is in high demand, a career in Python can be the perfect path to achieve your career goals. Stay updated with developments in Python and data sciences with online certifications offered by Simplilearn, one of the leading online certification training providers in the world. You can get started right away with the Python Certification Course. It can help you cover all the fundamentals of the Python language and get work-ready training in the field. On the other hand, if you are looking to leverage your knowledge of Python to foray into a career in data science, Simplilearn’s Data Scientist Master’s program should fit the bill nicely. This comprehensive bootcamp offers a role-aligned learning path designed to help you gain in-demand skills needed to become a data scientist, fast.