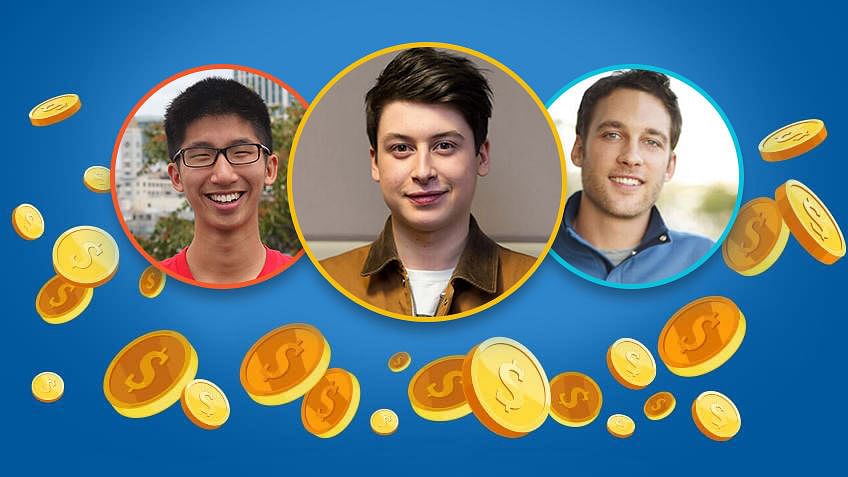 There were a combined 75 billion iOS and Android app downloads worldwide in 2015, driving the field of professional developers to reach 19 million just two years later. The majority of these apps are made for mobile use, and the most popular ones are those used for social networking, so it’s no wonder some of the most recognized names in app development are practically kids.

Some of these developers have become so successful, in fact, that they managed to make their first million even before they hit the legal drinking age.

Four exceptional young millionaire app developers stand out from the crowd (in no particular order):

Born in November 1995, Nick is an English computer programmer and internet entrepreneur. He is known for his app Summly, which is a summarization and artificial intelligence technology developed with SRI International.

In March 2011, Nick created an iOS application called Trimmit, which used an analytical tool to condense the text content into 1000, 500, or 140-character summary text. This application caught the attention of Apple, who then featured it as a new noteworthy application on the App store.

The huge potential of Trimmit then attracted the attention of a billionaire who provided Nick with $300,000 in venture capital funding. Using the feedback that Nick had got from Trimmit, he completely revamped the application and in December 2011, re-launched it as Summly.

One of the youngest self-made millionaires ever, Nick is also the world’s youngest venture capital-backed entrepreneur. In 2011, he initially raised $200,000 in seed funding from the Hong Kong billionaire Sir Li Ka-shing’s Horizon Ventures for his app. Later in 2012, he went on to raise a good $1.23 million from various A-list celebrity investors like Rupert Murdoch, Ashton Kutcher, and Stephen Fry.

As of March 2013, the app was sold to Yahoo! For $30 million. He was also awarded the “Innovator of the Year” title by Wall Street Journal. Until October 2015, Nick led the Yahoo News Digest operation launched at CES 2014, which went on to win the 201 Apple Design Award at WWDC for its technological and product excellence. Today, his latest venture Sphere Knowledge is raising funding for a stealthy new startup.

Born in 1991, Brian Wong is a Canadian internet entrepreneur. In 2010, Brian along with his colleagues Courtney Guertin and Amadeus Demarzi, founded Kiip, a mobile app rewards platform that lets companies and brands give real-world rewards for in-game achievements.

Kiip is active on more than 1,100 apps and on 75 million devices. It sends 500 million moments of achievement-based reward notices to customers on a monthly basis through its network. By mid-2012, Kiip had raised more than $15 million venture capital from companies like Hummer Winbald, Relay Ventures, Verizon Ventures, True Ventures, CrossLink Capital, and many others.

Kiip has expanded beyond the games platform and into the fitness apps like Nexercise, MapMyRun, Gym-Pact, LoloFit, and many others. Today, Kiip helps brands run more effective campaigns with “mobile advertising people like.”

2010 saw Brian as the second youngest company leader to receive funding from a venture capital firm, the first spot taken by Nick D’Aloisio. He has spoken at various popular conferences like TEDx, and SXSW.

Then a real estate agent, Chad Mureta was returning from a basketball game when an accident got him hospitalized and led him to come up with the idea of the Fingerprint Security Pro app.

Chad noticed the doctors at the hospital looking through his phone and thought about security. During his spare time at the hospital, he began downloading apps, understanding what was making people download them and why they were successful.
He then sketched his idea on a piece of paper and sent it to a developer. With no background in technology or development, his only strengths lay in the business and creative side of things. Three months after conceiving the idea, he submitted it to the app store, and the first month of sales brought in $12,000 which recouped his initial investment.

Two months after launching his own company, one of his apps averaged $30,000 per month cash flow. The income of the company later reached $120,000 in one month. In the next two years, he created and sold three app companies, which rank in millions.

Chad credits all of his success to having a game plan. In an interview with WHO? He says, “80% of business is the psychology of the business owner and 20% is the skillset. If you have psychology, you can get the skillset.” Today, Chad heads up App Empire, whose products help people turn app ideas into businesses.

Here is a slideshow that highlights their achievements.

The Android and the iOS market are getting bigger by the minute. New ideas for innovation are always welcome. The mobile app economy was worth $53 billion in 2012, and TechCrunch says it will be worth $6.3 trillion in 2021.

The infographic below depicts major developments in the app market.

Prepare yourself for the mobile app wave by building your skills and getting certified.

The video below on Introduction to Android App Developer Training Course offers a sneak-peek into Simplilearn’s course.

App Development with Android or the iOS: Which One to Choose?