Fact Table vs. Dimension Table - Differences Between The Two 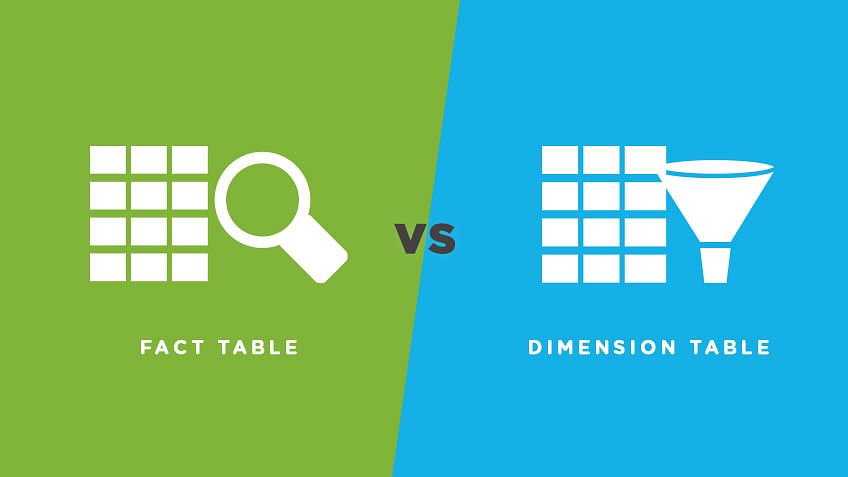 Fact tables and dimension tables are key components of a schema in a data warehouse. A fact table contains records that combine attributes from different dimension tables. These records allow users to analyze different aspects of their business, which can aid in decision-making and improving the business.

In this article, we will be discussing both these concepts and also their differences to be able to make better data analytics decisions!

What is a Fact Table?

In a data warehouse, a fact table is a table that stores the measurements, metrics, or facts related to a business operation.

It is located at the center of a star or snowflake schema and is surrounded by dimension tables.

Let us look at some of the main characteristics of a Fact Table.

Characteristics of a Fact Table

The following are some of the characteristics of a fact table:

Understanding the Granularity of a Fact Table

The granularity of a fact table is a common way to describe it. The grain of a fact table refers to the most basic level at which the facts can be defined. For example, the grain of a sales fact table might be "sales volume by day by-product by the shop," meaning that each entry in the table is uniquely identified by a day, product, and shop. Other dimensions, such as location or region, may also be included in the fact table, but they do not contribute to the uniqueness of the entries. These "affiliate dimensions" can provide additional information to slice and dice, but they usually provide insights at a higher level of aggregation (since a region contains many stores).

We will now understand the dynamics of a Dimension Table.

What is a Dimension Table?

Dimension tables contain descriptions of the objects in a fact table and provide information about dimensions such as values, characteristics, and keys.

To understand this better, let us look at some characteristics of a Dimension Table.

Characteristics of a Dimension Table

The following are some of the characteristics of a dimension table:

Now that we have a general understanding of fact and dimension tables, let us understand the key differences between these two types of tables in a data warehouse.

Despite being related to each other, the Fact and Dimension Tables consist of many differences.

Here are some of their major differences:

To understand the underlying context of each of these concepts in a better way, we need to understand their various types. In the upcoming section, we will understand the types of facts and dimensions along with their detailed examples.

The following are the different categories of facts:

The major types of dimensions are categorized as follows:

After learning about Fact and Dimension Tables, their major differences, and their types, it's time to summarize the key differences between them to solidify our understanding of them.

The key differences between Fact and Dimension Tables are as follows:

To understand these key differences even better, let us go through an example that connects the relationship between Fact and Dimension tables.

Let's say a business sells goods to clients. Every transaction is a fact that actually occurs, and the fact table is where these facts are recorded.

We can now include a dimension table for customers:

The client ID column in the fact table is used to connect to the dimension table. For instance, if you look at row 2 of the fact table, you can see that client 3, Mia Riana, made a purchase of six items with order id 143. To find out more information about what Mia purchased and when the company would also have a product table and a timetable.

When designing fact tables, there are considerations related to both physical constraints and data limitations. It's important to think about the size of the table and the ways in which it will be accessed. Indexes can be helpful for optimizing both of these factors. However, from a logical design standpoint, there should be no limitations on the structure of the table. It should be designed based on current and future needs, with as much flexibility as possible to allow for future updates without needing to completely rebuild the data.

Consider checking out the PCP Data Analytics Certification Training Course provided by Simplilearn if you're looking to learn more about data analytics and how to use these concepts in real-world situations. You may get the skills and information required for success in the industry by enrolling in this thorough course, which covers a wide range of topics, including data warehousing and business intelligence.

1. What is the dimension and fact table with examples?

The primary distinction between a fact table, also known as a reality table, and a dimension table is that the latter includes properties from which actual measurements are made.

2. What are facts and dimensions?

Data warehousing terminology includes facts and dimensions. A fact is a piece of information with a specific numerical value, like a sale or a download. Facts are kept in fact tables, which are linked to several dimension tables by a foreign key. Facts are accompanied by dimensions, which describe the items in a fact table.

3. Why is the fact table larger than the dimension table?

4. What is the relationship between facts and dimensions?

A single-dimension membership can be connected to many facts in the majority of dimensions, where each fact links to one and only one member of the dimension. This is known as each relationship in relational database jargon. However, connecting a single piece of evidence to several dimension members is frequently helpful.

5. What are the 5 types of dimensions?

There are 9 types of dimensions:

6. What are the three types of fact tables?

The three types of fact tables are as follows: