How to Become a Game Developer? 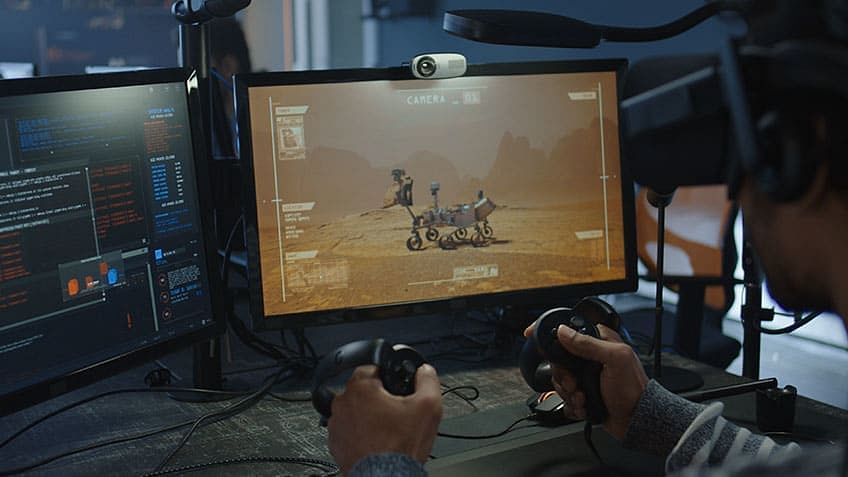 Game development entails an exciting blend of creative and technical skills to design and produce interactive video games for people and groups. It may comprise concept building, designing, building the graphics, AI characteristics, and game mechanics, testing and troubleshooting works in progress,  and releasing the game.

Game development can be taken up by a huge game development studio or a single individual. It can be as large or small as one likes. As long as a player interacts with the content and can manipulate the elements within, you can call it a ‘game’. To begin with the game development process, one need not necessarily write codes. Artists can build and design assets, while a developer can concentrate on the programming aspect, and a tester can get involved to ensure that the game works as expected.

Who Can Become a Game Developer?

Passion and creativity are essential qualities in the game development area. Today, the steady and ongoing advancements in technology and the expansion of e-games have grabbed center stage.

Let us first understand the gaming scope from an Indian perspective:

Most individuals love video games, and those with excellent technical abilities and a detailed understanding of gaming systems may find excellent professional prospects in the gaming sector. The crucial facets that bring a video game to life are built by game developers. If you enjoy video games and have strong arithmetic skills along with a creative attitude, then you have excellent potential to become a game developer.

Video game developers help transform a game’s perception into a playable reality. They create the features that make a video game usable for users. Developers write the code that instructs a system or computer to execute the game so that users can play it. Designing games or essential features, testing games, and conducting design reviews are what game developers do. They achieve this by coding aesthetic aspects, programming functionality, and testing the iterations till the game is ready for release. While designing and developing a game, it is crucial to think about the game mechanics, player engagement, rewards, and level design. A profession in the field of video game production could be extremely lucrative if you love video games and working with computers.

From its idea to completion, the development of a game includes teams of specialists and could take years to complete. Designing and developing a game’s look and how it works, animating objects and characters, generating audio, localization, programming, editing, testing, and producing are some of the processes involved in game development.

How to Become a Game Developer

Here are several steps you can take to become a game developer:

Skills and Responsibilities of a Game Developer

Developing a video game requires a combination of creative and analytical skills. Video game developers must work together to develop the concept for a game while following project timelines, interacting with team members, and working within a budget.

A degree in interactive media, animation, art, and games design, or graphic design could be beneficial if your profession combines both development and design. A variety of undergraduate and postgraduate games courses are accredited by the Independent Games Developers’ Association (TIGA). Working as a tester or quality assurance technician is another way to get into game production. Although you do not need a Higher National Diploma (HND) or a degree for this position, you should have some programming experience and considerable game playing experience, a grasp of diverse styles, and database and platform expertise.

Any degree subject can help in a career as a game developer; however, employers frequently look for a degree, foundation degree, or HND in:

Following are the skills that a game developer should possess:

To help others grasp technical material, game developers should be able to communicate. This includes both oral and written communication.

To enable the team to achieve its common goals, developers must possess excellent cooperation abilities, including the capabilities to interact effectively, exchange ideas, and offer feedback.

Developers should be able to efficiently solve issues through analysis, research, and sound judgment.

Creativity enables developers to consider new ways to resolve complex problems in video games and progress to the next level.

As the video game industry is always changing, adaptability is crucial for developers. There is always a chance that new technologies will emerge, impacting the game development process.

Tasks and Responsibilities of a Game Developer

While there is no definite path to a career in the gaming industry, one can always position themselves for an exciting career in the game development field. Let us discover how to become a game developer and the essential skills and qualifications required to help you find your niche.

One needs to first gain an understanding of the various types of video games and their different components to be able to design video game features. Do ensure to study the aspects of these games as you play the game to see what may have driven the developer to make certain decisions. Also, pay close attention to the framework of the game and the way it develops with time. While playing video games attentively, one can better understand how the game works, what features the game includes, and how those features interact within themselves.

A bachelor’s degree in computer science or software engineering gives a candidate a certain competitive edge. You may have a lot of talent and skill; however, a certification or completion of a relevant program demonstrates detailed knowledge and a solid foundation in the field. Employers generally prefer candidates who have finished their three-year degree courses as they are familiar with the scientific background that is crucial for game development. Check with colleges in your area if they offer degree programs that can help you with a career in game development.

Behind each video game is the code that executes the game for the user. Programming languages are essential to software development and are responsible for how we interact with and experience gaming platforms. Well-written code offers a smooth and continuous game playing experience, which is the ultimate goal of every game publisher. To achieve this, it is crucial for game developers to be familiar with the popular game engines and have good knowledge of programming languages, such as C++, C, Java, Lua, and so on. It can also be beneficial to have database development knowledge with MySQL, MS SQL, or Oracle. One needs to be aware of the changes in the implementation of the server backend and system architecture.

Instead of pursuing a programming job in a large game development studio that typically requires extensive experience, we recommend that you try and find your footing in the low-budget indie game or mobile game worlds. Knowledge about other game engines and programming languages can help increase your skillset and make you a good asset for future employers.

To become a game developer, one is required to have good coding skills, for which a basic knowledge of physics and maths is important. One requires mathematical skills to develop equations that direct computers to perform in a certain manner. For instance, for animation programming, one needs to know trigonometry, calculus, and linear algebra. Also, knowledge of physics can help one understand concepts such as mass, thermodynamics, and inertia.

While the graphics, physics, and lighting engines that prominent game development platforms offer have made things convenient for game developers, one still needs to brush up on their physics and math skills. Those scouting for an undergraduate degree should learn about linear algebra, trigonometry, basic algorithms, and geometry in detail.

Most gaming firms employ writers to design and develop original tales or new versions of current novels, comics, and films. However, an understanding of linear and non-linear storytelling and narrative strategies can be advantageous for the steps on how to become a game developer. In a linear story, the activities of the player drive the plot ahead; however, in non-linear games, the actions of a player can affect the unfolding of the plot. Understanding how the story progresses and finally comes to a suitable conclusion can provide you with a valuable outlook while writing the code for such storylines. Thus, building up the skill of storytelling is essential to being a game developer.

Once you add the games you have designed to your game developer portfolio, include screenshots of the game scenes so that your potential employers can assess the games. Also, include the links for the game installation software so that they can try playing the games. Don’t forget to give the necessary credits to anyone you may have collaborated with to design and develop the games.

Some video game organizations tend to post more about the vacancies they may have, so it is a good idea to keep checking the job boards from such companies. You can also create a profile on a job site to promote your skills and availability. Most smaller game companies cannot afford in-house programmers and look for freelancers, so be sure to advertise your skills. It does help to get an internship first and work in entry-level positions with smaller studios.

Trends and Salary of a Game Developer

To validate your creativity and technical talents to employers, you must be able to give a working demo of your game that includes the examples of game code you have created. Your ability to code in programming languages, such as C++, scripting experience, and understanding of specific software tools are valuable assets.

A survey from the Entertainment Software Association states that approximately 227 million people in the US play video games, making it the most prevalent form of entertainment. Career advancement within the game development industry can be swift. Most people who begin their careers as juniors get into leadership positions within five to seven years, and many get into more senior roles within ten years. Technical directors, producers, and team managers are examples of senior-level positions.

The basic salary for game developers in India is approximately Rs. 5,00,000 per annum. Other associated job titles, such as game designers and video game programmers, also have similar pay scales.

One earns more as one progresses to senior roles; video game development salary can go as high as Rs. 30 LPA.