HomeResourcesSoftware DevelopmentReact Vs. Angular Vs. Vue 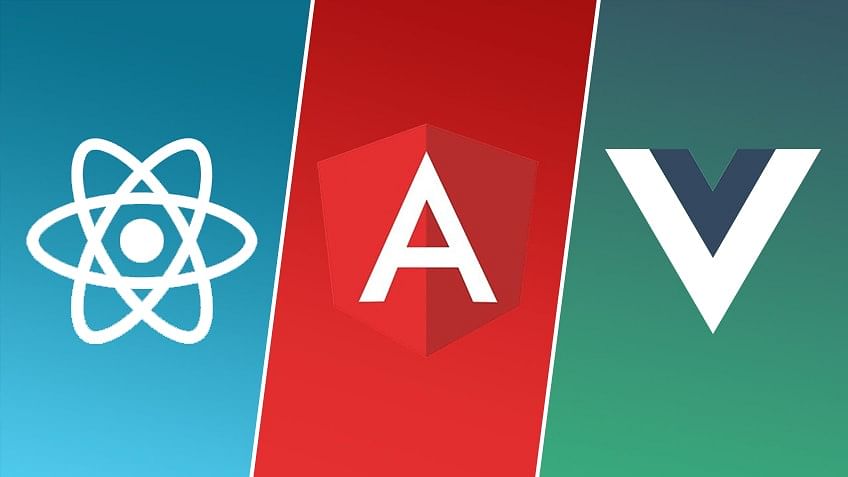 It can be overwhelming to decide which JavaScript framework to use when building a web application. This article will help you determine what technology you need by comparing the three most popular front-end frameworks used for creating web applications—React, Angular, and Vue.

We’ll weigh the pros and cons of each framework and deduce which is the most suitable for a particular scenario.

Angular is a TypeScript-based JavaScript framework and was initially released in October 2010. Though not as popular as React, Angular is also being used by many companies like Forbes, Nike, upwork, Sony, HBO, and Wix.

Vue was initially released in February 2014 by ex-Google employee Evan You and has become popular even though it’s not backed by a big company the development team has only about a dozen developers. Vue is being used by a few companies like Xiaomi, Adobe, Grammarly, Alibaba, and also in many small projects.

React keeps a lightweight representation of the Real DOM in memory known as the Virtual DOM.

When the state of an object changes, Virtual DOM changes only that object in the Real DOM instead of updating all the objects, and this makes things fast.

Since Angular uses Real DOM and not a Virtual DOM, it’s slower in comparison to React and Vue when rendering the web application. That means Angular updates the entire tree structure of the DOM whenever any object changes.

Vue uses Virtual DOM (VDOM) as an adopted concept of React. Like React, Vue updates only those objects that get changed in the “real” DOM, so the rendering speed is faster than Angular and similar to React.

“Data binding is a process that allows an internet user to manipulate Web page elements using a Web browser. It is used in Web pages that contain interactive components such as forms, calculators, tutorials, and games.”

React uses the one-way binding. First, the model state is updated, and then it renders the change in the UI element(view). Since the data flows only in a single direction, this makes it easier to debug React applications.

Angular uses two-way binding. Any changes made in the UI element is reflected in the corresponding model state and vice versa. It’s easier to implement, but debugging is comparatively difficult.

Vue supports both one-way binding and two-way binding, which is called reactive two-way data binding. It automatically selects the correct way to update the elements based on the type of input.

React combines UI templates and JavaScript logic, the concept which no framework had implemented before. The result is called the JSX. React makes use of a component, which contains both the markup and logic in the same file. React only requires the knowledge of JavaScript.

Angular uses TypeScript. TypeScript is a statically typed language, which means you must define the variable’s type (string, character, number, array, etc.). TypeScript is meant to be friendlier for the developers having an object oriented programming (OOP) background.

VueJS uses HTML, js, and CSS separately. The template-based approach for VueJS is straightforward, and new developers can easily adapt to this programming style promoted by Vue.

Jest is used by Facebook to run tests on React, is embedded in every React library, and requires zero configuration.

Vue CLI has built-in options for unit testing with Jest or Mocha. Vue’s single-file components make it straightforward to write unit tests for components in isolation.

All three frameworks have a fair amount of community support available for developers, and the community continues to grow.

React has a massive number of GitHub repositories attributed to it. At the time of this writing, there are 1 million repositories, more than 5 million commits, and over 1 million issues posted on GitHub. A few popular Github repositories on React are reactjs101, reactjs.org, reason-react, react-paginate.

Angular also has a relatively large following on GitHub with over 556K repositories, 1 million commits, and 570K issues posted on GitHub. Angular, angular.js, angular-cli, angular-seed are a few Github repositories.

Vue has about 308k repositories, 812K commits, and over 302K issues posted on GitHub. Vue-awesome-swiper, vuejs.org, vue-Apollo are a few Vue GitHub repositories that have gained popularity.

According to Google trends, React is on a much faster upward trajectory than Angular and Vue, which have lost much of its momentum.

Though these three frameworks have their pros and cons, you should now be able to decide which one to learn or use for your project.

To learn more about frameworks, refer to Simplilearn’s YouTube playlist and watch videos that we’ve curated so you can dive into the world of React and more of the differences between React, Angular, and Vue.

Looking for further training? Opt into our React.js Training Course, which will give you a solid understanding of how React enables developers to master user interface development skills with ease. You’ll be able to build React.js applications using React router, data flow, and usage with React, Bootstrap, and CSS. You can even check out the Angular Certification Training Course and gain in-depth knowledge of Angular concepts like facilitating the development of single-page web applications, dependency injection, typescript, components, and directives.