Lesson 10 of 16By Simplilearn 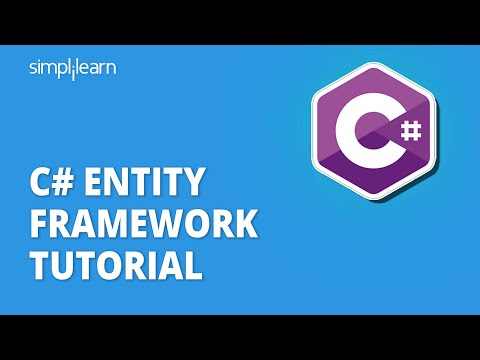 The Entity Framework is a collection of ADO.NET technologies that help in the building of data-driven software applications. Entity framework is an Object Relational Mapping (ORM) framework that provides developers with an automated system for storing and accessing data in a database. When dealing with data, developers can work at a higher degree of abstraction with the Entity Framework. When compared to traditional applications, you may use Entity Framework to design and maintain data-oriented apps with less code. This tutorial will give you an overview of the Entity framework.

What is the ASP.NET Entity Framework?

Entity Framework (EF) is an object-relational mapper that allows.NET developers to work with relational data by utilising domain-specific objects. It eliminates the requirement for most data-access code that developers typically have to write.

Here are some of the key highlights of ASP.NET Entity Framework -

Why Use ASP.NET Entity Framework?

You can write code against the Entity Framework, and the system will generate objects for you, track changes on those objects, and ease the database update process. As a result, the EF can replace a significant amount of code that you would otherwise have to build and maintain yourself.

Instead of writing code, the mapping between your items and your database is provided declaratively. If you need to update your database schema, you can reduce the impact on the code in your applications. It adds a layer of abstraction to the application, allowing it to be separated from the database.

The queries and other operations you write into your code are expressed in a non-database-specific syntax. The queries in the EF are written in LINQ or Entity SQL, and the providers transform them at runtime to the appropriate back-end query syntax for that database.

The Architecture of ASP.NET Entity Framework

The Architecture of Entity Framework consists of the following components:

The query language LINQ-to-Entities (L2E) is used to write queries against the object model. It returns the entities defined in the conceptual model.

These E-SQL queries are internally translated to SQL queries that are dependent on the data store. The Entity Framework handles the conversion of E-SQL queries to datastore-specific query languages such as T-SQL(Transact SQL).

The Object Context, which represents the session of interaction between the applications and the data source, is part of the Object Services layer. The main purpose of the Object Context is to perform various actions like adding and deleting instances of things and saving the modified state back to the database using queries.

This layer exposes the upper layer to the entity layer. Entity client allows developers to work with entities in the form of rows and columns using entity SQL queries without having to construct classes to express conceptual structure. Entity Client displays the entity framework layers, which are the foundational functionality. These levels are referred to as Entity Data Models.

When programming against the conceptual schema, these are source-specific providers that abstract the ADO.NET interfaces used to connect to the database. It converts standard SQL languages such as LINQ to native SQL expressions and executes them on the specified DBMS system using a command tree.

Entity Framework was first introduced by Microsoft in 2008.  It has since launched numerous versions of Entity Framework. Entity Framework now includes two types: EF 6 and EF Core. The table below shows the list of EF versions, their release dates and the .net framework used.

This tutorial on ‘ASP.NET Entity Framework’ covers its features and architecture. Apart from what ASP.NET Entity framework is, it also includes why to use it and its version history. Proceeding further, you will see the comparison between EF6 and EF Core.

If you wish to learn .NET, consider enrolling in the Simplilearn .NET Programming course. This comprehensive course will help you learn the fundamentals of.NET programming and create .NET projects. In the .NET programming certification course, you will be introduced to the .NET ecosystem and coding with C#, including Visual Studio and Webforms, which will help you prosper in your career.

For a more extensive explanation of these ASP.NET Entity frameworks, please visit our YouTube channel.

If you have any questions, please post them in the comments area of this "ASP.NET Entity Framework" article and one of our professionals will get back to you as soon as possible!