HomeResourcesBig DataScala vs Python for Apache Spark: An In-depth Comparison With Use Cases For Each

21 Reasons You Should Learn R, Python, and Hadoop

Advantages of Python Over Java in Data Science 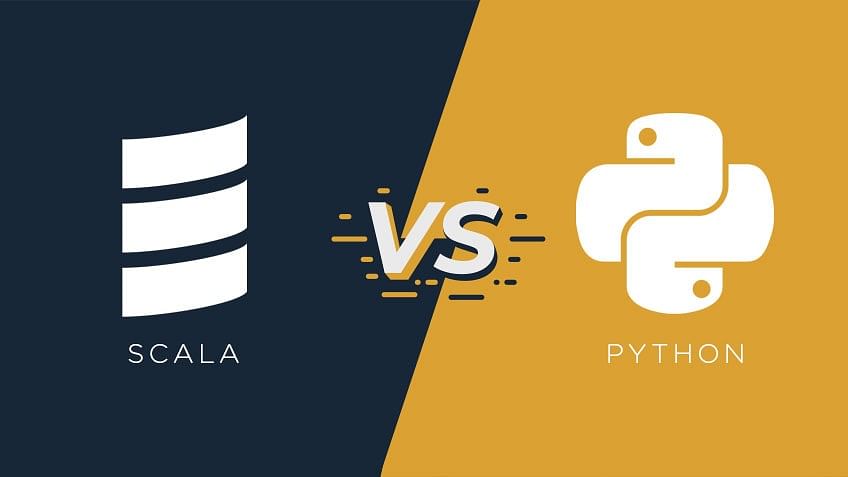 Look at this article’s title again. It would be unsurprising if many people’s reaction to it was, “The words are English, but what on earth do they mean!?”

Fortunately, we are here to inform and provide clarity.

First, let’s review and familiarize ourselves with these components individually.

Scala, an acronym for “scalable language,” is a general-purpose, concise, high-level programming language that combines functional programming and object-oriented programming. It runs on JVM (Java Virtual Machine) and interoperates with existing Java code and libraries.

Many programmers find Scala code to be error-free, concise, and readable, making it simple to use for writing, compiling, debugging, and running programs, particularly compared to other languages. Scala’s developers elaborate on these concepts, adding “Scala's static types help avoid bugs in complex applications, and its JVM and JavaScript runtimes let you build high-performance systems with easy access to huge ecosystems of libraries.”

Python developers define the language as “…an interpreted, object-oriented, a high-level programming language with dynamic semantics. Its high-level built-in data structures, combined with dynamic binding and dynamic typing, which makes it very attractive for Rapid Application Development, as well as for use as a scripting or glue language to connect existing components together.”

Programmers like Python because of its relative simplicity, support of multiple packages and modules, and its interpreter and standard libraries are available for free. These advantages, and many others besides, compel programmers to learn Python.

What is Apache Spark?

Hadoop is Apache Spark’s most well-known rival, but the latter is evolving faster and is posing a severe threat to the former’s prominence. Many organizations favor Spark’s speed and simplicity, which supports many available application programming interfaces (APIs) from languages like Java, R, Python, and Scala.

Here’s a more detailed and informative look at the Spark vs. Hadoop frameworks. If the article convinces you to learn more about Spark, then consider looking at this Spark tutorial.

What is Scala Used For?

Anything you use Java for, you can use Scala instead. It’s ideal for back-end code, scripts, software development, and web design. Programmers also tout Scala’s seamless integration of object-oriented features and functional languages as the perfect tool for parallel batch processing, data analysis using Spark, AWS Lambda expressions, and ad hoc scripting with REPL.

What is Python Used For?

Python’s simplicity and simple to learn syntax make it the ideal choice for developing a desktop graphical user interface (GUI) applications, web applications, and websites. Its emphasis on readability makes it a cost-effective option, particularly in terms of maintenance.

Why Learn Scala For Spark?

Now that we have been introduced to the primary players, let’s discuss why Scala for Spark is a smart idea. We’ve seen earlier that Spark has a Scala API (one of many). So why would Scala stand out?

Here are five compelling reasons why you should learn Scala programming.

Overall, Which Language is Better?

The best way to answer the “Scala vs. Python” question is by first comparing each language, broken down by features.

So, which programming language is better? Boring answer, but it depends on what your project needs are. If you want to work on a smaller project with less experienced programmers, then Python is the smart choice. However, if you have a massive project that needs many resources and parallel processing, then Scala is the best way to go.

There is a lot to learn about Big Data, including its tools, associated programming languages, and other related resources. Simplilearn has a useful collection of topical information—from tips on how to boost your skills to ways to help you prepare for an upcoming job interview.

For example, this Spark Scala tutorial helps you establish a solid foundation on which to build your Big Data-related skills. Follow this up by practicing for Spark and Scala exams with these Spark exam dumps.

Before embarking on that crucial Spark or Python-related interview, you can give yourself an extra edge with a little preparation. Check out these Spark interview questions or Python interview questions, and reduce the chance of getting caught without a knowledgeable answer.

Professionals already involved in Big Data can benefit from these resources, too. The best professionals, regardless of their field, engage in continuing education and upskilling. After all, the industry changes fast, and there’s always something new to learn! Upskilling increases your knowledge base and makes you a more valuable and viable candidate should you decide to look for a new position elsewhere.

Do You Want a Career in Big Data Analytics?

The course helps you advance your mastery of the Big Data Hadoop Ecosystem, teaching you the crucial, in-demand Apache Spark skills, and helping you develop a competitive advantage for a rewarding career as a Hadoop developer.

You will master the essential skills of the Apache Spark open-source framework and Scala programming language. Learn Spark Streaming, Spark SQL, machine learning programming, GraphX programming, and Shell Scripting Spark. You will even learn how to overcome MapReduce’s limitations by using Spark.

Find Apache Spark and Scala in these cities