The Supreme Guide For Golang Vs. Python

Lesson 2 of 3By Simplilearn 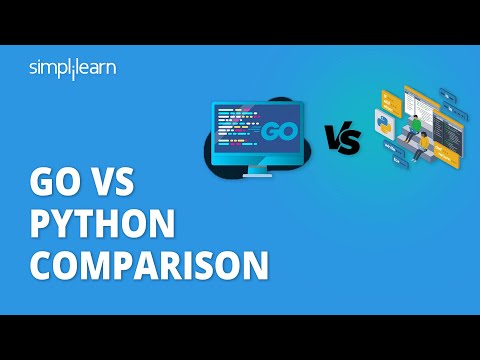 Most development teams conduct forums to decide the best language suitable for their project. There are numerous languages for every purpose you could think of. Amongst these coding languages, developers are often stuck between Golang and Python. This tutorial will help you compare the two languages based on various parameters.

Before you get around to comparing Golang vs. Python, go through a brief introduction to both these languages.

Golang is an open-source programming language launched by Google back in 2009. The Go programming language was born to carry away all the excess baggage found in languages such as C++. Robert Griesemer, Rob Pike, and Ken Thompson designed a procedural, compiled, and statically typed language to reduce the complexity of managing the infrastructure and codebases within Google.

It resolved many issues, but it also comes short with a few things. For one, it does not have an extensive library nor support for inheritance. In addition, there is no GUI library or object-oriented programming support. But it has goroutines, strong security, and some standard libraries.

You can execute your code with no setup on the playground provided at golang.org.

Python is a popular, in-demand, general-purpose programming language with straightforward syntax. Python was developed by Guido van Rossum in 1989 and was released in 1991. Python's name was taken from the popular BBC comedy show, "Monty Python's Flying Circus". Because of its various libraries and community support, Python has been used in a broad selection of projects and systems.

Now, get down to comparing them.

Comparison Between Golang and Python

The parameters of comparison are:

Multiple tests show that Go runs up to 30 times faster than Python. Here, you will compare the performance of the languages by solving complex problems. You must consider memory usage and time spent solving the problem.

You solved three different problems using both languages: the Mandelbrot equation, n body problem, and binary tree. These are complex problems that take a lot of computation and operate as the best way to test the memory management and performance of the language.

This clearly shows you that Golang outshines Python when it comes to performance.

Let's do a comparison of the two from a scalability perspective.

The whole purpose of developing Golang was to help developers at Google scale up and deliver to the company's needs. That's why Golang was developed with inbuilt support for concurrent process channeling, i.e., concurrency. On the other hand, Python lacks concurrency but can execute parallelism through threads.

You will now understand the concept of concurrency and parallelism.

Parallelism means that an application runs its tasks into smaller tasks that can be processed in parallel on multiple CPUs simultaneously.

Take an example of a team of technicians building a monitor. Concurrency allows multiple technicians to build different parts of the monitor, but they share one common workbench for assembling the parts. Only one technician can assemble at the workbench at a time and other technicians operate on their parts in the background. With parallelism, you have multiple workbenches where technicians can be building parts simultaneously.

So, it's obvious that a language has support for concurrency. It is perfect for big and scalable programs.

Now, move ahead and compare these two languages based on their application now.

Golang is mostly used for systems programming. Because of its inherent support for concurrency, Golang has also found ample use and acceptance in cloud computing or cluster computing. Golang has also seen a lot of recognition and use in web development due to its powerful and easy-to-use libraries, which allow you to set up a web server in a matter of seconds.

On the other hand, Python is widely used in web development, data analytics, artificial intelligence, and deep learning. It can mostly accredit this to the insane libraries available in Python that make life in the said fields a lot easier.

Let's compare the two on the topic of execution.

In a statically typed language, variable types are declared explicitly for the compiler so that even trivial bugs are caught easily.

This implies that Python, a dynamically typed language, limits the programmer when he intends to build a really big program. At the same time, Go can handle both types of programs.

Now, get on to libraries.

Google chose the most important libraries as a part of their built-in Go libraries. It has built-in libraries for web development, database handling, concurrent programming, and encryption. But, you would have to write your code to search through data tables and perform operations. Machine learning would be a big thing to develop in Go. But this doesn't mean Golang falls short in any terms. It has some very well-curated libraries.

On the other hand, Python is almost 16 years older than Go, resulting in much larger community support. Python has a huge amount of support, lessons, tutorials, and ultimately libraries with that community. The Python libraries, in particular, are vast. Exploring data tables can be easily done with Pandas, and machine learning is simple with TensorFlow and PyTorch. This type of support can get anyone writing code to do what they want on Day One.

Now it’s time to get to the next point of comparison: readability.

While developing software, you will generally work as a team with tens or even hundreds of other developers. At such times, code readability is the major factor to consider.

Golang has strict programming rules. It doesn't allow unnecessary variables to be defined or unnecessary libraries to be imported. This implies a definite way to perform a task, leading to a better understanding of code while working in a team. Golang's syntax is not friendly to beginners, but it's not as unforgiving as C or C++.

On the other hand, Python has fantastic readability. But there are various ways to write a single piece of code in Python, which mostly leads to time consumption and confusion in a team.

It is generally used in server-side programming, hence not used in app development.

Hope this tutorial helped you decide which language is better for your project.

Go and Python is both easy to use and to learn. Go is fast and Python has a ton of community support. Python and Golang are very clear when it comes to syntax and lessen the developer's task to a greater extent. In Go’s development, itis mostly used for server-side applications. Python is the data scientist’s go-to language and likely will be for a long time to come.

If you aim to build a software development career, you can check the Post-Graduate Program in Full Stack Development by Simplilearn. It can be the ideal solution to help you build your career in the right direction.

In case you have queries or would like to provide your inputs to our editorial team regarding this “The Supreme Guide for Golang vs. Python” tutorial, feel free to use the comments section below for the same. Our team of SMEs will review, help you solve them or incorporate your inputs in the best way possible, very soon!