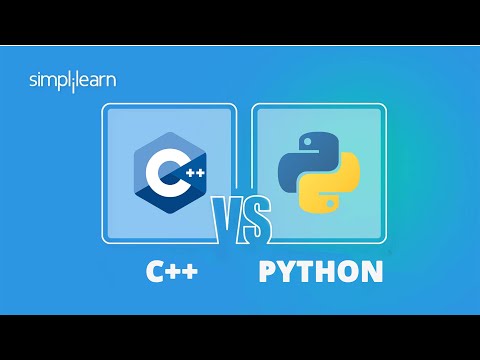 Python and C++ are both general-purpose programming languages. Both languages are pretty different when it comes to overall approaches like syntax, usage, etc. But still, it gets difficult while you select the correct language. In this tutorial on C++ vs. Python, you will cover everything you need to know about C++ and Python so that it gets easy for you to select a suitable language.

The syntax of C++ includes.

Header files: Header files that are included at the top of the program. These files instruct the compiler to include all the required functions associated with the header file. This is included using the preprocessor directive #include.

The <iostream> is the header file that is generally included in the C++ programs, and this file allows us to use input-output operations.

Class: A class can be defined as a blueprint that describes the behavior of objects, or you can say it is a collection of objects. Class is defined with the keyword class, and it has its own members called member functions or methods, variables and constructors, etc.

Methods: Method or function is one of the most important parts of C++ programming because it is used to write logic, perform data manipulation, and all other essential operations inside the method. You can give the name to the function along with the return type, and then inside the brackets, we can write the operations or logic.

Objects: Objects can be defined as an instance of a class. If an object is created for a particular class, then that object can be used to access data members and functions of that class using the dot operator. It can be done by writing the name of the object preceding the dot operator and then the function name following round brackets.

Instance variables: These are those variables that are defined inside the class but are outside the methods. They basically belong to the object, and every object has its own unique set of instance variables.

The syntax of Python includes:

Comments: Comments in Python are used to store tags at the right places in the code. It is basically used to explain sections of code and is declared using the # symbol.

Docstrings: Docstring is also used to explain the code in Python. The programmer can inspect them at runtime. Its boundaries are determined by using three double quotes and inside these double quotes, you can write or explain.

Indentation: In Python, indentation means the spaces at the beginning of the code line; if there is no space, it will show a syntax error. You can indent use the space or the number of tabs.

Quotation: Quotations are used to create string objects in Python. If you use a single quote at the beginning of the string, then you must end it with the single quote itself, and the same goes for double quotes as well.

Identifiers: Identifiers are used to define an element in Python uniquely; now that element can be variable, function, class, etc., there are some rules associated with it. An identifier can only begin with uppercase A to Z and lowercase a to z or an underscore.

Key Differences Between C++ and Python

After reading this tutorial on C++ vs Python, you would have understood what C++ is, along with the syntax of C++ and, similarly, Python along with its syntax. You also learned about the uses and features of C++ and Python and the difference between both languages.

If you are perhaps looking to build a career in software development, check the Post Graduate Program in Full Stack Development by Simplilearn. It can prove to be the ideal solution to help you build your career in the right way.

Do you have any questions regarding this article on Python vs C++? If you do, then please put them in the comments section. We’ll help you solve your queries. To learn more about Python vs C++, click on the following link: C++ vs Python