SPC Charts: Overview, When to Use Them and How to Create Them 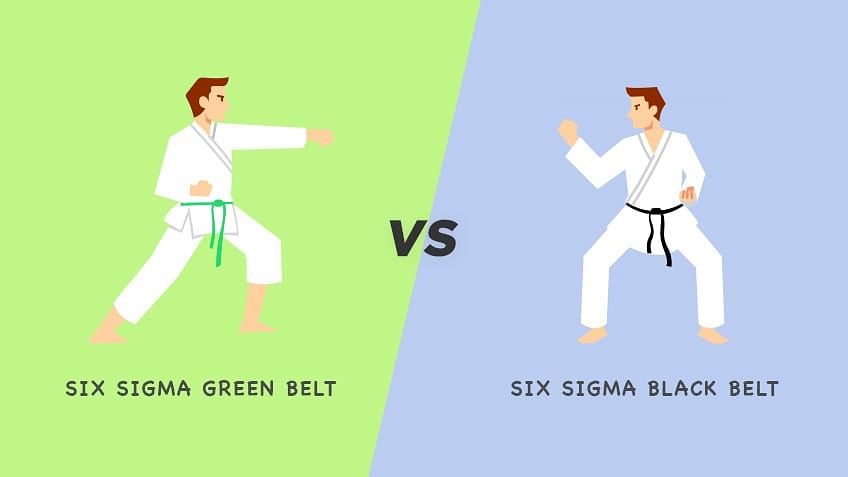 Organizations implementing Six Sigma seek to improve their output quality by reducing defects and variation. To achieve these objectives, they use a data-driven approach that involves Define, Measure, Analyze, Improve, and Control (DMAIC) phases.

What is a Six Sigma Black Belt?

A Six Sigma Black Belt is a professional who has undergone special training in Six Sigma methodology and is responsible for leading Six Sigma initiatives within an organization. Black Belts typically have experience in a wide range of Six Sigma tools and techniques and can effectively apply them to solve problems.

Six Sigma Black Belts play a vital role in Six Sigma implementation, as they are the ones who are responsible for teaching others the methodology and helping to lead projects. Black Belts typically deeply understand Six Sigma and can effectively coach and mentor others.

What is a Six Sigma Green Belt?

Green Belts are typically employed in manufacturing or service organizations, and their job is to identify and solve problems that can lead to improvements in quality and efficiency.

Green Belts typically have at least three years of experience working in their organization, and they must thoroughly understand the Six Sigma tools and techniques. They also must communicate effectively with other members of the Six Sigma team, as they will often be leading projects involving multiple teams.

Six Sigma has four levels - White, Yellow, Green, and Black. Each level has its own set of requirements and certifications.

The first level, White, is the introductory level. Six Sigma White Belt certification is available to anyone who wants to learn the basics of Six Sigma.

What Do Green Belts Do?

Green Belts are trained in all aspects of Six Sigma, including DMAIC (Define, Measure, Analyze, Improve, Control) and DFSS (Design for Six Sigma). They use these tools and methods to identify and solve problems within their organization. Green Belts typically work on smaller projects than Black Belts, but they are still an essential part of the Six Sigma team.

What Do Black Belts Do?

How to Get Six Sigma Green and Black Belt Certifications?

Benefits in Your Career

Finally, these certifications can give you the satisfaction of knowing that you've mastered a complex and challenging subject matter. Six Sigma is a challenging field; completing a certification program can be a great way to feel proud of your accomplishments.

Which Level is Right for You?

Deciding which Six Sigma level is right for you can take time and effort. You need to consider a few things, such as your experience level, desired salary, and future career goals.

If you're starting your Six Sigma journey, then the Green Belt certification is likely the best option. This level will give you a basic understanding of the Six Sigma methodology and how to apply it to real-world problems.

If you're looking to move up the corporate ladder and earn a higher salary, then the Black Belt certification is the way to go. This level requires a deeper understanding of Six Sigma concepts and a more remarkable ability to apply them to complex problems.

No matter which level you choose, Six Sigma certification can help you boost your career and earn a higher salary. So do your research and choose the level that's right for you.

Master the continuous improvement frameworks and agile management practices and accelerate your career in Quality Management. Enroll in our PGP in Lean Six Sigma and reap the benefits. Contact our learning counselor today!