Ubuntu Vs. Debian: A Look At Beginner Friendly Linux Distribution

Lesson 54 of 60By Simplilearn 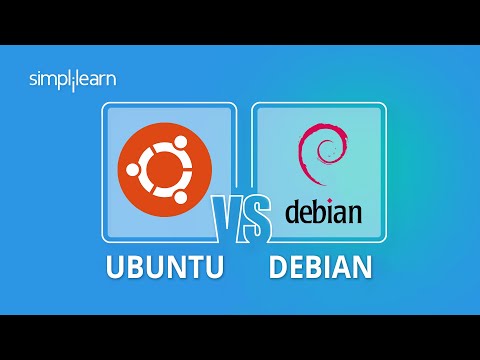 With the world moving towards the next generation of computer hardware, the software side of things still has a lot left to be discovered. With most laptops coming with windows pre-installed, many users are devoid of the Linux operating system experience, which is arguably leaner and more resource-friendly than other mainstream OS. It can also be attributed to the difficulty people face when installing a new operating system like Linux. However, many of these issues are fixed nowadays thanks to names like Debian and Ubuntu, who have been instrumental in making Linux-based operating systems as user-friendly as possible. But in the case of Ubuntu vs. Debian, which one is better suited for you?

In this comparison of Ubuntu vs Debian, start by learning about each OS from a grassroots level before getting into the technical details.

Brief Description of Ubuntu vs. Debian

Ubuntu is an open-source Linux distribution based on Debian. Ubuntu, sponsored by Canonical Ltd., is regarded as a suitable first distribution for newcomers. Although it was designed primarily for personal computers, you may also use it on servers. GNOME, a graphical user interface and suite of desktop apps for Linux, is used in the standard version of Ubuntu. GNOME is designed to be comparable to the Windows desktop experience to make Linux easier for non-programmers.

The Debian Linux project is a community-driven endeavor that conforms to the ideals of Open Source Software. Debian-based operating systems are an example of a contemporary and widely used Linux operating system. The Debian project distinguishes itself among other Linux projects because of its widespread community support, vast package repositories, and free project management approach. Debian Linux also has several useful features that are beneficial to both novice and expert users.

Now, you will compare their unique offerings in the next section to get a better idea of Ubuntu vs. Debian.

Features of Ubuntu vs. Debian

Now that you understand the primary selling point of these operating systems, take a look at some of the installation guidelines for Debian and Ubuntu.

How to Install Ubuntu and Debian?

Before you sum up this recommendation depending on use-cases, go through a direct comparison between Debian and Ubuntu.

Which OS to Go For?

After going through each operating system’s features, you can see the choice is very much use case dependent.

With that, you have reached the end of this comparison between Ubuntu and Debian.

In this tutorial on Ubuntu vs. Debian, you covered the basics of two beginner-friendly Linux distributions and went through their unique features. It also looked into installation basics and requirements while directly comparing Ubuntu and Debian for easier decision-making. However, starting with Linux is the first and one of the most vital steps in your journey into cyber security.

To continue benefiting from this knowledge, you can go for the  Cybersecurity Expert Certification offered by Simplilearn. It covers basics like Linux usage, wireless hacking, system administration, and advanced ethical hacking topics like enumeration and security operations. With the market demand for trained personnel at an all-time high, the time couldn't be better to dip your toes in the lucrative cyber security industry before the storm settles.

Do you have any questions about Ubuntu vs. Debian? Do let us know below in the comments box, and we will get back to you soon.