HomeResourcesDigital MarketingMBA Preparation: Everything You Need to KnowThe Supreme Guide to Golang vs. Rust

Why Do an MBA? The Top 6 Reasons to Opt For an MBA Program

Your Complete Guide for CAT Preparation

Top Six Leadership Skills That You Should Master for Workplace Success

Here’s All You Need to Know About MBA in Finance

The Art of Saying No: The Best Guide to Reclaim Control Over Your Productivity

A Thorough Look Into the Field of Asset Management

The Top Resolutions for 2022 That You Should Make

A Comprehensive Look at What Business Process Management Is

A Look at the Top 10 Best Indian Startups

Lesson 13 of 14By Simplilearn 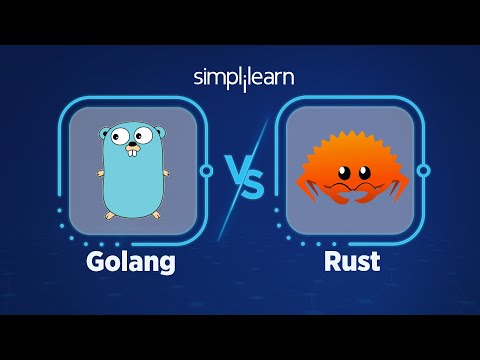 This Golang vs. Rust article will discuss two open-source, most popular and efficient programming languages Golang and Rust. Both languages provide high-performance and efficient hardware capacity, making them considerable for various projects by the developers. These similarities have made both languages popular to work with. The question arises which language to choose and why. In this article, you will see the comparison between Golang and Rust on different parameters and then decide with these facts.

Golang is an open-source programming language launched by Google back in 2009. The Go programming language was born to carry away all the excess baggage found in languages such as C++. It comes with goroutines, strong security, and some standard libraries. Robert Griesemer, Rob Pike, and Ken Thompson designed a procedural, compiled, and statically typed language to reduce the complexity of managing the infrastructure and codebases within Google.

Rust is a multiparadigm, general-purpose and high-level programming language. Graydon Hoare introduced it along with Dave Herman, Brendan Eich, and others at Mozilla Research.  Rust is focused on safety, stability, performance and safe concurrency. It got its 1.0 version on May 15, 2015. In a Stack Overflow Developer Survey, developers voted Rust as the most loved programming language by developers since 2016.

Comparison Between Golang and Rust

The parameters we’ll be looking for Golang vs. Rust are:

Now, we will start with the Golang vs. Rust Comparison.

Go and Rust are both compiled languages and they directly translate the code to executable machine code. Both languages produce efficient code.

Many big MNCs use Rust to boost speed, whereas Go is famous for reducing the number of responsible servers to almost a tenth of the original capacity. Rust has the upper hand in delivering output over Go due to its great runtime speed, but it lacks compilation time.

On the other hand, Go is better in compilation time but lacks runtime speed.

Let's do a comparison of the two from a concurrency perspective.

Go was designed to use CPUs efficiently and handle multiple tasks simultaneously. The purpose was accomplished with the introduction of goroutines. These are lightweight, call fewer resources, and are executed independently. These features allow Go to work with a high number of goroutines without affecting performance. That is, they run concurrently with other functions. These have eliminated the need to create new threads.

On the other hand, Rust was recently introduced with the native syntax in the form of async/await and guarantees memory stability. Therefore, developers prefer to work with Go in the case of concurrency.

Now, move ahead and compare these two languages based on Memory Management and Security now.

With different approaches, Go and Rust practice safe access and memory management, making them the choice for cloud computing. Security vulnerability increases when you access memory unsafely. Go offers various paradigms such as memory allocation and automatic garbage collection to handle possible vulnerabilities and bugs. Go gets automated during the run time and it allows developers not to bother assigning or removing memory.

On the other hand, Rust ensures no memory leakage during the compile time. Moreover, the code won't be compiled until it's memory safe, which requires developers to be attentive and be aware of memory allocation.

Now, get on to Developer’s Experience between Golang vs. Rust.

Now it’s time to get to the next point of comparison: Development Speed.

Development speed is far more crucial than performance; that is how quickest it is to write software with the language than to run it. Go, with its simplicity, sets some benchmarks by quicker build speed than a range of languages in the market. But, it has to sacrifice its runtime performance for it.

On the other hand, Rust's memory safety feature compromises compilation time. And its features take time to understand, making the developer compensate with both compilation and development time.

When to Use Go:

Most languages support concurrent programming, whereas Go is especially well-designed for the purpose. Go has a different range of project types. Go best fits for server-side applications, backend web development, databases, and network programming as its goroutines can handle many concurrent, independent requests.

You should Choose Go If:

When to Use Rust:

Rust is perfect for managing machine resources for better performance when processing vast data and other CPU-intensive operations such as executing algorithms. Rust possesses excellent memory safety features guaranteeing bugs detection but slows down the compilation speed to an extent.

It's not a disadvantage; rather, it guarantees that developers won't encounter any memory safety bugs, as the compiler compiles and checks every data pointer. Developers who prefer faster runtime will prefer Rust anytime.

You Should Choose Rust If:

Go and Rust share a considerable amount of similarities. They both are recently introduced languages with built-in memory safety and concurrency. Both are fantastic languages and target different use cases. Whether you should go with Rust or Go for your project solely depends on the project's needs and requirements. In the above section of Golang vs. Rust, we have discussed both the language's use cases and differences. I hope the article should help you make your choice.

In case you have queries or would like to provide your inputs to our editorial team regarding this “The Supreme Guide to Golang vs Rust” tutorial, feel free to use the comments section below for the same. Our team of SMEs will get back to you soon!