HomeResourcesSoftware DevelopmentJavaScript Tutorial: Learn JavaScript from ScratchCallback Functions in JavaScript: Everything You Need to Know

Callback Functions in JavaScript: Everything You Need to Know 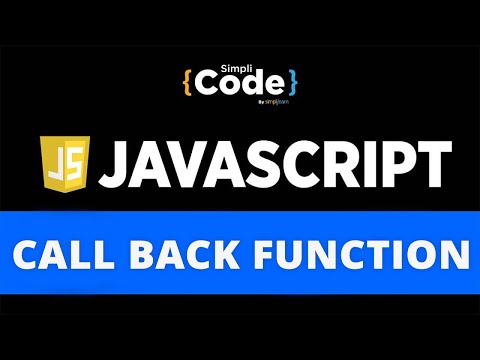 A JavaScript callback is a function which is to be executed after another function has finished execution.

A more formal definition would be - Any function that is passed as an argument to another function so that it can be executed in that other function is called as a callback function.

We need callback functions because many JavaScript actions are asynchronous, which means they don't really stop the program (or a function) from running until they're completed, as you're probably used to. Instead, it will execute in the background while the rest of the code runs.

Let us look at a real-world example to understand it (synchronous callback function) better.

A callback's primary purpose is to execute code in response to an event. These events might be user-initiated, such as mouse clicks or typing. With a callback, you may instruct your application to "execute this code every time the user clicks a key on the keyboard."

If you wanted to download data from a server (which may take long durations of time), it would be wasteful for your program or function to just freeze while you waited for the data to be fetched. Instead, it's common practice to execute the fetching operation in the background.

This implies that if you have two functions in a row, one of which is asynchronous, function B will be performed while the other is still running. If function B is dependent on the data that function A is retrieving, you will run into issues.

An async keyword is placed as a prefix to the function to make a function asynchronous.

The above function fetches fake user data of 10 users. We are then converting it to a json object to extract the user data.

We can make this an asynchronous callback by adding it to an event, like a button click.

There are many ways to handle nested callbacks, using async await as discussed above, or using the old school way of promises (read about promises) or splitting the code into different functions.

Now you can create one more function and call the above function as a callback.

We have already seen how to create an asynchronous callback in the above section.

We can write asynchronous functions as if they are synchronous (executed sequentially) with the use of await as it stops the execution until the promise is resolved (function execution is successful).

You can nest these functions in promises as well.

Callback functions are needed because many JavaScript actions are asynchronous. Instead, it executes in the background while the rest of the code runs. A callback's purpose is to execute code in response to an event. These events can be like mouse clicks; with callback, we can add text at the end of each statement like"execute this code every time the user clicks a key on the keyboard."

When to Use the Callback Function

There are ways to handle callbacks.

We have looked at the what's and why's of callback functions in JavaScript, along with examples using synchronous and asynchronous functions to understand callbacks.

In the end, we also covered what is nested callbacks and how to tackle them using promises and async-await.

To learn more about JavaScript and its amazing features which powers websites, take the Full-Stack Web Development course.

You can also sign up on our SkillUp platform to improve your software development knowledge. It is a Simplilearn initiative that offers free online courses to help you hone your skills in multiple programming languages, including JavaScript.