Lesson 4 of 31By Simplilearn 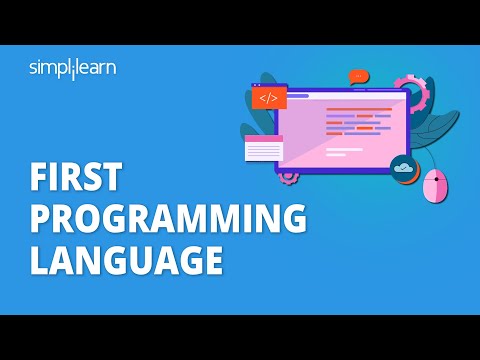 The evolution of software development has reached greater heights in recent times. The current IT industries demand the most efficient and updated software development skillset in the market, and there is no better way to upgrade your skills. These are the building blocks of development in the modern era. So here is the article on the First Programming Language to get an idea and clear understanding of the programming languages.

The above section is covered with an explanation of programming. Now, you will see why you need programming in the present world.

Why Do You Need Programming?

The first functioning programming languages designed to communicate instructions to a computer were written in the early 1950s, proposed by John Mauchly's Short Code in 1949. It was one of the first high-level languages ever developed for an electronic computer.

In 1954, the FORTRAN was invented at IBM led by John Backus; it was the first widely known high-level, general-purpose programming language to have a functional implementation instead of just a design on paper. When FORTRAN was introduced, it was viewed with skepticism due to several bugs and delays in development and comparative efficiency of hand-coded programs written in assembly.

And the first high-level programming language was Plankalkul, which was developed by Konrad Zuse for Z1 computers between 1943 and 1945, but he was not able to implement it at the time. Other languages also still in use today include LISP, invented by John McCarthy, and COBOL, created by the Short Range Committee.

You now have an idea of the history of programming languages. Now, understand which language to start at the beginning of this article on the First Programming Language.

How to Choose Your First Programming Language?

Before you are ready to learn advanced programming methods, you must be clear with the basics of software development. There are many software development tools and frameworks available in the market. These help and have a huge impact on learning and choosing the best career. All the development of software and tools require basic coding. Let's have a look at which language to start at the beginning.

Many people look for the trending and top programming languages to learn, but before they are ready to learn, they must have an idea of the basics. One of the most preferred languages in recent years is the "C" programming language, which is the most popular language for people who are ready to start learning to program. C language covers all the basics, which help to build a better platform for learning many different languages. Once you are clear with the basics, it helps to get an idea and clear understanding of all the other languages.

The above section covered and provided a clear understanding of which language to start with. Now you will understand some top and trending programming languages in the tutorial about the First Programming Language.

Python is one of the most preferred programming languages because the syntax of python programming can be easy to understand for every lever reader. The programming language is also loaded with libraries that help in implementing scientific computing. Working and deployment in python are supportive and easy in any kind of environment.

In today’s modern time, Java is the best language to choose. Nearly thousands of applications, software, and development tools are built using the Java programming language. This technology is mainly used in creating websites such as YouTube, Google, Amazon, and more.

JavaScript is responsible for fast and secure development. The main advantage and prospective are to provide more interactivity with the users and coders. It also helps in expanding innovative technologies which involve animation, gaming, and rendering.

R language is very scalable and makes it easy to build aesthetic web applications. This language is mainly developed by using Statistics and Data Science knowledge. R acts as a cross-platform because of the ability to run on any operating system.

PHP is a general-purpose scripting language used for web development. It was created by Danish-Canadian programmer Rasmus Lerdorf in 1994. The PHP Group now produces the PHP reference implementation. PHP originally stands for the Personal Home Page, but it now stands for the recursive initialism PHP.

The above section in this article on"First Programming Language" has provided a complete idea of top and trending programming languages. Now, you will walk through some steps to improve programming.

Steps to Improve Your Programming Skills

For a clear and clean understanding of programming, this tutorial has provided you with some steps, let's have a look at them in detail.

If you are looking forward to building a career as an expert programmer, our Full Stack Web Development PGP is what you need. Delivered in collaboration with Caltech CTME, it offers comprehensive work-ready training in top full stack development technologies with projects that will help you perfect your skills and certificates that are recognized worldwide.

If you have any queries or concerns for us about this article on First Programming Language. Do mention in the comment section below. We have our experts to resolve all your queries right away.