What is Project Management?

PMBOK® Guide Sixth Edition: All You Need to Know

Lesson 9 of 11By Rahul Arun 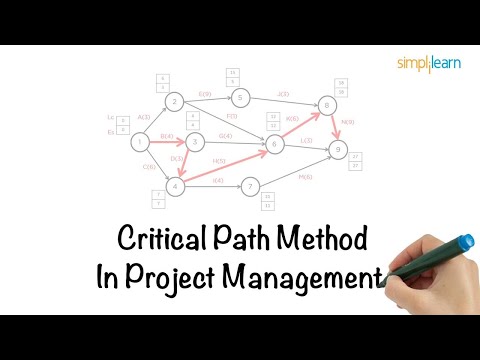 CPM or the Critical Path Method is an algorithm used in project management that is used to schedule project activities. The critical path refers to the longest stretch of the activities, and a measure of them from start to finish.

With the help of CPM, we’ll be able to create a model that enables you to determine the following:

Now, before we can get started with CPM or Critical Path Method, we’ll have to understand two major concepts which are Events and Activities. To help understand them better, let’s have a look at the network diagram (which is also the output) of the process.

This output represents some of the most important parts of the process: Events and Activities.

Events are represented by a circle and will occur at the start and end of an activity. Event 1 is the tail event and Event 2 is the head event. In the case of our example, the events are 1, 2,3,4, 5, and 6. Taking into consideration, nodes 1 and 2, and the connection between them, 1 will be referred to as the tail event, and 2 will be referred to as the head event.

Activities represent action and consumption of resources like time, money, and energy required to complete the project. In the case of our example, A, B, C, D, E, and F represent the activities taking place between their respective events.

Other rules to consider

Now, let’s talk about the process of the Critical Path Method with an example.

The objective of the question below is to determine the critical path, based on the information available, like activity, immediate predecessor, and duration (which in this case, we’ll take as months)

First, let’s analyze the activities and their immediate predecessors.

Activities A, B, and C don’t have any immediate predecessors. This means that each of them will have individual arcs connecting to them. First, we’ll draw nodes 1 (which is the starting point) and 2. We’ll add the activity on the arc, along with the duration.

We’ll have to also keep in mind that A acts as the immediate predecessor for both nodes E and F. Similarly, let’s draw the arcs for nodes B and C.

So now, we’ve completed activities A, B, C, and D of the critical path method. Next, let’s take a look at activity E.

Activity E is preceded by activity A and acts as the immediate predecessor for activity J. Since this is an independent activity, we’ll be able to draw an arc like this.

If we have a look at activity F, it’s preceded by activity A, and a combination of F, G, and H act as immediate predecessors for the activities K and L. So let’s wait before we take it up. Instead, let’s shift our attention to activity G. It’s preceded by B. So, we’ll draw it like so.

Now, let’s take a look at activity H. It is preceded by both C and D and will act as the immediate predecessor for K and L, along with F and G. So, we can connect node 4 to 6.

Now that we’ve done that, let’s go back to activity F.  Now that we know where activities G and H connect to, we can combine nodes 2 and 6, fulfilling the conditions required for activities K and L.

Following this, we have an activity I. The activity I is preceded by activities C and D. It also acts as an immediate predecessor to activity M. Since it’s an independent activity, we can draw it like so.

Next, let’s take a look at activity J. Activity J is preceded by activity E. We can also see that a combination of J and K will act as an immediate predecessor for activity N. We can then draw an arc like this.

Let’s go on to activity K. Here we can see that K is preceded by F, G, and H. It also acts as an immediate predecessor to activity N. So, we’ll connect nodes 6 to 8.

Next, let’s continue with activity L. The table now shows that L, M, and N don’t act as immediate predecessors for any other activity. Hence it can be assumed that it’ll connect to the final node.

L is preceded by activities by F, G, and H. The arc can be drawn like so.

We’ll now go to activity M. This activity is preceded by activity I. Similarly, we can connect an arc from node 8 to 9 for activity N.

Now, the network is complete!

The process of determining the Es for all events is called a forward pass.

The process of determining the Lc for all events is called a backward pass.

Let’s get into the forward pass. For this, first, we’ll need to create boxes at all nodes. These are then divided into two. The lower half of the box represents the earliest start time of the node, while the upper half represents the latest completion time.

So, for node 1, the earliest start time is always zero.

For node 4, we can see that two arcs connect to it. This means that we’ll need to choose among the largest of the two options available to us.

Similarly, we have three options to choose from when it comes to node 6. Since three arcs connect to it.

Hence we’ll select the last option since it’s the largest among the three.

Now, for node 5. Since it’s directly connected to node 2, we can directly apply the formula.

Now for node 7. We can directly apply the formula to these nodes.

It has 3 nodes connecting towards it. We’ll have to choose the maximum of the three.

We’ll choose the arc from node 8 since it’s got the highest value.

And like that, the forward pass is complete. Now, for the second part of the critical path method.  Let’s take up the backward pass. For that’ we will be using the following formula.

Next, let’s have a look at the latest completion time for the 8th node. Since it’s directly connected only to the 9th node, we can directly apply the formula mentioned earlier.

Now, let’s have a look at the latest completion time for node 7. Since there’s a direct connection between nodes 9 and 7.

Let’s move on to node 6. As we can see in the diagram, there are two points extending to nodes 8 and 9 from node 6. So we have two options to choose from.

We’ll now go to node 5. Since it’s directly connected to the 8th node, we can directly apply the equation.

Next up, let’s find the latest completion time for node 4.

Since there are two connections extending from the node, to nodes 6 and 7 respectively, we’ll need to select the minimum between the two.

We’ll choose 7 as the latest completion time for node 4.

Since there are two nodes connecting from node 3 to nodes 4 and 6. So, we’ll need to choose between the 2.

We’ll choose 4 as the latest completion time for node 3.

Let’s now go to node 2. Again, since there are two connections made from 2 to node 5 and 6, we’ll need to choose the minimum among the two.

We’ll choose the latest completion time of 2, as 6.

And finally, we have node 1.

Since there are connections to 2, 3, and 4 from 1, we’ll need to choose from the three.

We’ll choose 0 as the latest completion time for the node.

And there we go! The backward pass is complete.

And there we go! We’ve found the critical path!

Are you a professional who is aspiring to be a Project Manager? Then check out the PMP Certification Training Course Enroll now.

Now that you know the critical path method, you can go into some of the more complex concepts of project management. For that, we recommend signing up for the PMP Certification Training Course, which prepares you for your PMP certification exam. When you use effective tools like Microsoft Excel templates, you can raise your career to a whole new level.

If you have any questions for us, please leave them in the comments section, and our team of experts will be happy to answer them for you at the earliest!