HomeResourcesSoftware DevelopmentWhat is BIOS? A Guide for Beginners

What is BIOS? A Guide for Beginners 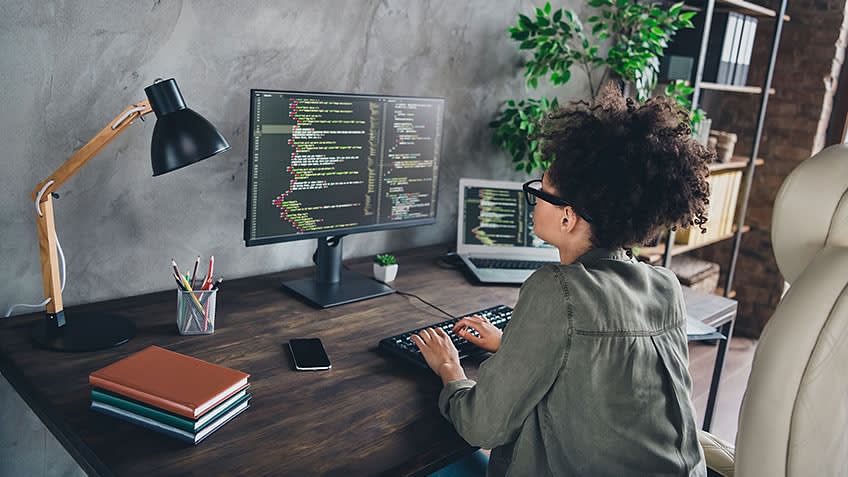 How much do you know about the inner workings of your computer system? Though it's wise to leave tech-related maintenance and troubleshooting to the professionals in most cases, it's good to familiarize yourself with the fundamentals. When we gain a better understanding of system components and operations, we can better identify issues and either resolve them ourselves or explain the problem to a service person clearly.

So today, we're looking at BIOS. This article gives you the whole lowdown on BIOS, including exploring what a computer BIOS is, what a BIOS update is, the function, type, and availability of BIOS, and the different versions and manufacturers.

Let’s begin by answering the question, “What is a BIOS in a computer?”

BIOS, pronounced "BYE-oss," stands for Basic Input Output System and is software stored on a small memory chip in your system's motherboard. When you boot up your system and look at the screen at the right time, you may see a startup message that uses the term "BIOS."

You may have possibly heard variations of the term "BIOS." But, for example, if you're wondering, "Then what is a BIOS?" no worries. It's the same thing. BIOS is alternately called ROM BIOS, PC BIOS, and System BIOS.

BIOS is the first software that runs when you power on your system, performing an initial pack of diagnostic tests (POST, or Power On Self-Test) to see if there are any issues with the hardware. POST is the first step in your hardware’s boot sequence. The machine won't continue with the boot sequence if the POST fails.

So, to recap, BIOS is firmware (in other words, software embedded in a piece of hardware) stored on a ROM chip that lets you access and set up your system at its most basic level.

What is a BIOS and What’s Included?

A BIOS contains the instructions your computer needs to load its basic hardware, including the POST mentioned above. If your system fails the POST, you will hear a series of beeps; different beep sequences indicate various issues.

BIOS firmware is non-volatile, meaning that the settings are saved and can be recovered even if the machine no longer has power.

What is BIOS: The Functions of a BIOS

And here’s a list of functions you can do with most BIOS systems:

*not relevant in modern systems

When you want to make any changes to the above configurations, save the changes, then restart your system. This process will ensure the changes stick.

Can a BIOS Chip Be Upgraded?

If you want to upgrade your BIOS chip to add more memory to it, you must completely replace the old BIOS chip with a newer, more advanced model.

You can update the data on your BIOS chip, but only if it’s a flash BIOS. Older BIOS chips don’t have this capability and must be completely replaced. A flash BIOS lets you update the BIOS by booting with a special disk or executing a particular set of instructions. This way, you don’t even have to open the case!

Every modern system motherboard has BIOS software. It’s like the computer equivalent of an automobile’s starter; you must have one to get going. The BIOS is part of the motherboard’s hardware, making it independent of any machine’s operating system.

So, whether you’re running Windows, Unix, Linux, or no operating system at all, BIOS doesn’t rely on them, as it operates independently of your computer’s environment. Incidentally, Mac systems technically don’t use BIOS; they’re supported by a comparable firmware known as Open Firmware, a boot firmware used by Apple and Sun.

What Is a BIOS: Types of BIOS

There are two main types of BIOS:

Although we’ve already called out a chief difference between BIOS and UEFI in the previous section, let’s compare them more closely.

IT tech giants such as Intel, AMD, AMI, Apple, Dell, HP, IBM, Lenovo, and Microsoft have phased out BIOS or are in the process of doing so in favor of UEFI. So it looks like BIOS is slowly going away.

We’ve already touched upon BIOS upgrading, but it’s essential to call out a few key points if you want to tackle this chore.

What Is BIOS: Versions of BIOS

When BIOS first became popular, it was basically owned by IBM. Thanks to the wonders of reverse engineering, that soon became moot. Here is a list of some of the more popular BIOS and motherboard vendors, a vital resource should you want to contact them for upgrading purposes.

So, What Is BIOS Now?

Although BIOS is being gradually being phased out, very few bits of tech vanish entirely. Many legacy systems are still around today, and BIOS information will stay relevant until the last old system is scrapped. Therefore, staying familiar with this foundational firmware is a good idea.

Speaking of older tech, did you know that Java and JavaScript have been around for almost 30 years? And yet they are still heavily used, especially in full-stack development. To become a full-stack developer, you must check out Simplilearn’s Caltech Coding Bootcamp.

This bootcamp, held in partnership with Caltech’s Center for Technology and Management Education (CTME), will help you master both front-end and back-end Java technologies, beginning with the basics and moving on to the advanced aspects of full stack web development. You will learn valuable skills in Angular, Spring Boot, web services, JSPs, and MongoDB, all suitable to help you launch your career as a full-stack developer.

According to Indeed, a full-stack developer in the U.S. earns an annual average of $101,234.

Full-stack developers are the most versatile developer professionals today and are much in demand. If this is a career that interests you, visit Simplilearn today and get started in a new and rewarding profession!