HomeResourcesCloud ComputingWhat is the Ethernet and What is its Value in a WiFi World?

What is the Ethernet and What is its Value in a WiFi World? 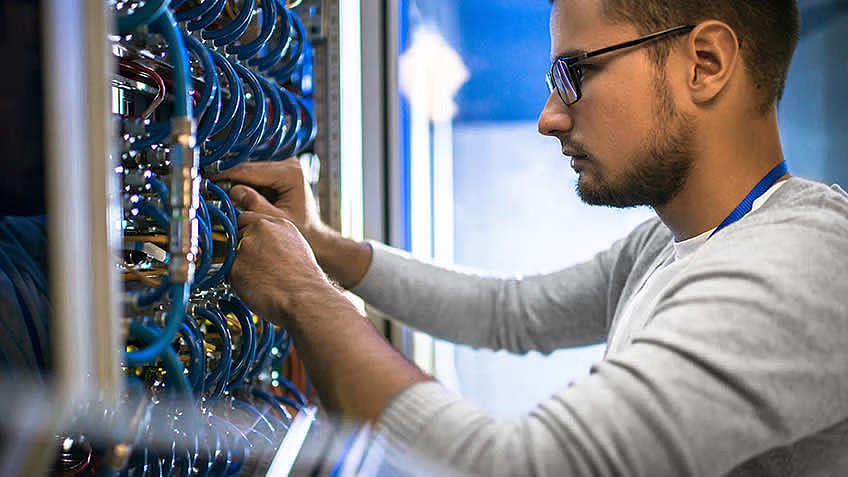 As the world evolves ever-more nimbly toward a wireless landscape, an old stalwart of cable-connected technology still has a valuable role to play: the Ethernet.

While today’s WiFi enjoys greater flexibility, range, and convenience for numerous devices, Ethernet is still the go-to connective technology for businesses that demand greater security, speed, reliability, and data quality. The Ethernet is perfect for connecting equipment used by specific organizations such as universities and schools, hospitals, government entities, and business offices

Transform yourself into a cloud professional.Enroll Now

What Is the Ethernet?

The Ethernet connects equipment such as switches, routers, and computers using a simple user interface. Communication between the linked devices is enabled using a local area network (LAN) using a single router and some Ethernet cables. The Ethernet is different from the Internet, which connects computers utilizing a telephone line, software protocol, and hardware. WiFi sends data using wireless signals.

by Robert Metcalfe and others. Xerox patented the technology in 1975. Metcalfe had two challenges: to build a fast enough network to drive the company’s new laser printer and to connect hundreds of computers in the same building. An open Ethernet standard was finalized in 1980, and by 1985, it had become an Institute of Electrical and Electronics Engineers (IEEE) standard. IEEE defines Ethernet as protocol 802.3.

Modern PCs began including Ethernet cards on the motherboard, which became very inexpensive. Ethernet networks in the workplace started with some small companies using telephone-based, four-wire lines. It wasn’t until the early 1990s that an Ethernet connection was established using twisted pair and fiber optic cables. This development facilitated the introduction of the 100 MB/s standard in 1995.

The OSI model has seven layers:

What Are Ethernet Cables and Setup

Ethernet cables run from the modem or modem-router combo (or gateway) to the Ethernet ports on devices such as desktop computers, laptop computers, and televisions.

An Ethernet network usually is active in a 10-kilometer periphery, according to Versitron. Using fiber optic cable increases the distance covered by a network. Ethernet networks include:

What Is the Ethernet: Advantages and Disadvantages

Installing Ethernet, WiFi, or both depends on what a user needs. Ethernet is the right direction for businesses and users who demand security, reliability, and performance. Residential users will find that Ethernet delivers an advantage for online gaming and smart televisions.

WiFi supports many more devices, and users are free of being tethered to a wire. It’s ideal for laptop computers, smartphones, and other portable devices.

So, while WiFi is making our world more interconnected and flexible, the Ethernet is still chugging along, playing an essential role in keeping critical data more secure and accessible when it’s needed.

Looking to Up Your Tech Skills and Boost Your Career?

The IT landscape is changing at phenomenal speed, and keeping up with the latest skills is essential if you want to work in the field. While many traditional networking jobs that required working directly with hardware-based networking systems are becoming less common due to the move to the cloud, more and more cloud professionals are needed every day. That’s why you should consider upskilling in this rapidly growing field to get in on the action. Simplilearn offers a wide variety of cloud courses and bootcamps to help aspiring professionals get up to speed, like the Cloud Computing Bootcamp with University of Minnesota’s Carlson School of Management. In this interactive, online bootcamp, you can gain all the skills and expertise required to plan, design, and deploy cloud implementations on AWS and Microsft Azure in just six months. Check it out today!