HomeResourcesCyber SecurityWhat Is Kerberos? How Does Kerberos Work: Everything You Need to Know

What Is Kerberos? How Does Kerberos Work: Everything You Need to Know 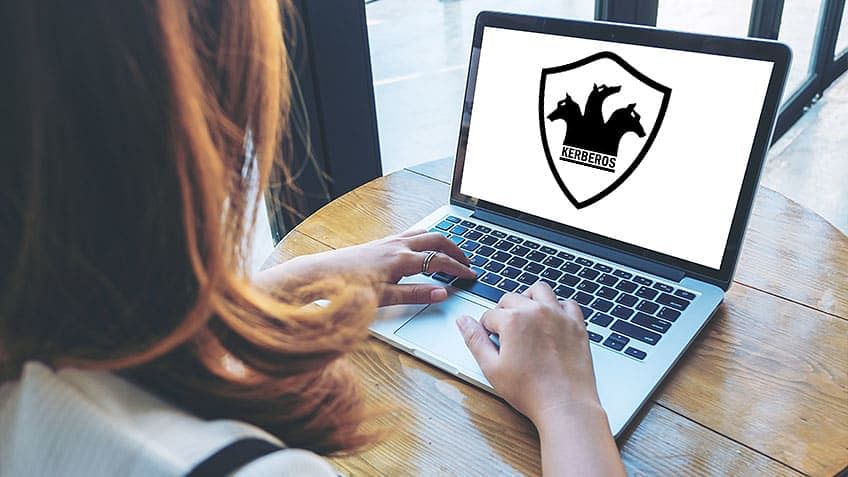 Cybercrime is an unfortunate fact of life these days, regardless of whether we're talking about private consumers or the business world at large. No company or organization is safe, and the problem won't get any better anytime soon. Experts predict cybercrime damages to cost the world $25 trillion by 2025. As if that isn't bad enough, Forbes predicts that cybercriminals will pose an increasing risk to mobile devices, something that so many people use today.

These predictions, and so many others, point to the harsh reality that cybercrime is here to stay, and the problem is only going to get worse. Consequently, the digital world is eager to find and employ new strategies to strengthen cyber security.

Today, we are looking at the Kerberos authentication protocol. Let's pull back the curtain and get acquainted with this effective network protocol.

Let us begin with the basics by understanding what is Kerberos and how it works.

Go from Beginner to Expert in 6 Months!

What is Kerberos? How Does Kerberos Work?

Kerberos is a computer network security protocol that authenticates service requests between two or more trusted hosts across an untrusted network, like the internet. It uses secret-key cryptography and a trusted third party for authenticating client-server applications and verifying users' identities.

Initially developed by the Massachusetts Institute of Technology (MIT) for Project Athena in the late '80s, Kerberos is now the default authorization technology used by Microsoft Windows. Kerberos implementations also exist for other operating systems such as Apple OS, FreeBSD, UNIX, and Linux.

Microsoft rolled out its version of Kerberos in Windows 2000, and it's become the go-to protocol for websites and single sign-on implementations over different platforms. The Kerberos Consortium maintains the Kerberos as an open-source project.

The protocol derives its name from the legendary three-headed dog Kerberos (also known as Cerberus) from Greek myths, the canine guardian to the entrance to the underworld. Kerberos had a snake tail and a particularly bad temper and, despite one notable exception, was a very useful guardian.

But in the protocol's case, the three heads of Kerberos represent the client, the server, and the Key Distribution Center (KDC). The latter functions as the trusted third-party authentication service.

Users, machines, and services that use Kerberos depend on the KDC alone, which works as a single process that provides two functions: authentication and ticket-granting. KDC "tickets" offer authentication to all parties, allowing nodes to verify their identity securely. The Kerberos authentication process employs a conventional shared secret cryptography that prevents packets traveling across the network from being read or altered, as well as protecting messages from eavesdropping and replay (or playback) attacks.

What is Kerberos Used For?

Although Kerberos is found everywhere in the digital world, it is employed heavily on secure systems that depend on reliable auditing and authentication features. Kerberos is used in Posix authentication, and Active Directory, NFS, and Samba. It's also an alternative authentication system to SSH, POP, and SMTP.

What Does Kerberos Authentication Protocol Do?

MIT developed this protocol for a project named Athena. It gets its name from the three-headed dog of Hades, who guarded hell in Greek Mythology. They chose this name because the Kerberos protocol represents the following three things:

In Kerberos, KDC grants tickets. These allow different hosts to prove their identity. In addition, the developers intended for Kerberos' authentication that supports authorizations. That means a client authenticated by Kerberos also has access.

The Benefits of Kerberos Authentication

Kerberos brings a host of advantages to any cybersecurity setup. Its advantages include:

As a part of the learning flow of learning what Kerberos is, let’s check out the Kerberos protocol flow.

Most goals of Kerberos deal with password management. It ensures that passwords do not get transmitted over the network. They will not be on the client systems; the system will discard them immediately after use. Passwords should not be in plain text while storing. And each session must use only one password.

Additionally, all authentication information will be in a centralized server. That means

In Kerberos, all entities must authenticate to each other upon prompt.

The following entities use Kerberos protocols:

What is Kerberos: Protocol Flow Overview

Here’s a more detailed look at what Kerberos authentication is all about. We will also learn how it works by breaking it down into its core components.

Here are the principal entities involved in the typical Kerberos workflow:

Learn the Most In-Demand Skills!

First, there are three crucial secret keys involved in the Kerberos flow. There are unique secret keys for the client/user, the TGS, and the server shared with the AS.

The protocol flow consists of the following steps:

Step 1: Initial client authentication request. The user asks for a Ticket Granting Ticket (TGT) from the authentication server (AS). This request includes the client ID.

Step 2: KDC verifies the client's credentials. The AS checks the database for the client and TGS's availability. If the AS finds both values, it generates a client/user secret key, employing the user's password hash.

Step 4: The client uses TGT to request access. The client requests a ticket from the server offering the service by sending the extracted TGT and the created authenticator to TGS.

Step 5: The KDC creates a ticket for the file server. The TGS then uses the TGS secret key to decrypt the TGT received from the client and extracts the SK1. The TGS decrypts the authenticator and checks to see if it matches the client ID and client network address. The TGS also uses the extracted timestamp to make sure the TGT hasn't expired.

If the process conducts all the checks successfully, then the KDC generates a service session key (SK2) that is shared between the client and the target server.

Step 6: The client uses the file ticket to authenticate. The client decrypts the message using SK1 and extracts SK2. This process generates a new authenticator containing the client network address, client ID, and timestamp, encrypted with SK2, and sends it and the service ticket to the target server.

Once the checks are met, the target server sends the client a message verifying that the client and the server have authenticated each other. The user can now engage in a secure session.

After coming so far in learning what Kerberos is, let us next look into the topic if Kerberos is infallible.

How Do Kerberos Authentication Protocols Work?

Below you can see a crude version of how the Kerberos Authentication Protocols work:

The service ticket has a specific expiry time. You can use the same session ticket to access services until it expires. The default lifetime of a Kerberos ticket is 600 minutes.

Kerberos vs. Other Network Authentication Protocols

There are other authentication protocols besides Kerberos; you can read them below.

NTLM by Microsoft is the former technology used by Windows. From Windows 2000, all editions use Kerberos. In addition, NTLM used a challenge-response authentication. Here, the server asks a question, and the client must answer.

Using LDAP, you can maintain information about users. Moreover, you can find Kerberos and LDAP on one network: LDAP provides authorization service, and Kerberos authenticates.

Its goal was to allow dial-in users to access Internet Service Providers remotely. However, network services use it for accounting and authenticating along with Kerberos.

Now, you know the answer to the question, "What is Kerberos?". You might be wondering if it is secure.

Security practitioners worldwide consider Kerberos to be secure. It has strong encryption to secure data. However, security researchers have found few ways to defeat Kerberos.

Can Kerberos be Hacked?

No security measure is 100% impregnable, and Kerberos is no exception. Since it's been around for so long, hackers have had the opportunity over the years to find ways around it, usually by forging tickets, making repeated attempts to guess passwords (brute force/credential stuffing), and using malware to downgrade the encryption.

Despite this, Keberos is still the best security access protocol available today. The protocol is flexible enough to employ more robust encryption algorithms to help combat new threats, and if users practice good password choice policies, you should be fine!

Longevity doesn’t automatically mean obsolescence. Despite some instances where cyber-criminals have broken through Kerberos (and we’ve already established that no security system is 100 percent impregnable), it’s still in heavy use and enjoys a solid reputation.

Wish to accelerate your cyber security career? Try answering these CISSP Exam Prep Practice Test and know your understanding of the concepts.

Do You Want to Learn More About Cyber Security?

The cybersecurity field is a vast and diverse place, covering many different topics, subjects, and procedures. If you're looking for effective ways to improve your cybersecurity knowledge, then you should consider some of the following.

There is a steady demand for certified ethical hackers to help test systems and spot vulnerabilities. Check out Simplilearn's Ethical Hacking Course course and get started on the career path of a white hat hacker. Or, maybe you want more knowledge regarding relevant IS topics like CompTIA Security+  or COBIT 2019.

Finally, you can shoot for the prestigious Cyber Security Expert Master's Program, which covers many of the above topics in one convenient plan. Indeed reports that cybersecurity specialists in the United States can earn an average of $108,389 annually, while the same position in India brings in an average yearly salary of ₹963,367.

Do You Want a Cyber Security Career?

If you're looking for a career that's challenging, rewarding, and offers excellent job security, then a position in the field of information security is for you! Simplilearn's Certified Information Systems Security Professional (CISSP) Certification training course helps you realize your dream by developing your expertise in defining the IT security architecture using globally approved information security standards. The comprehensive course teaches you common techniques used in the industry and prepares you for the CISSP certification exam held by (ISC)².

You get 67 hours of in-depth learning, five simulation test papers to help prepare you for CISSP certification, the requisite 30 CPEs needed for taking the exam, and a voucher for the exam itself.

If you have any kind of doubts, feel free to post them in the comments below. Our team will get back to you at the earliest.

What Is Shopify, and How Does It Work?