Cyber Security Risks in the todays Era of Digitalization 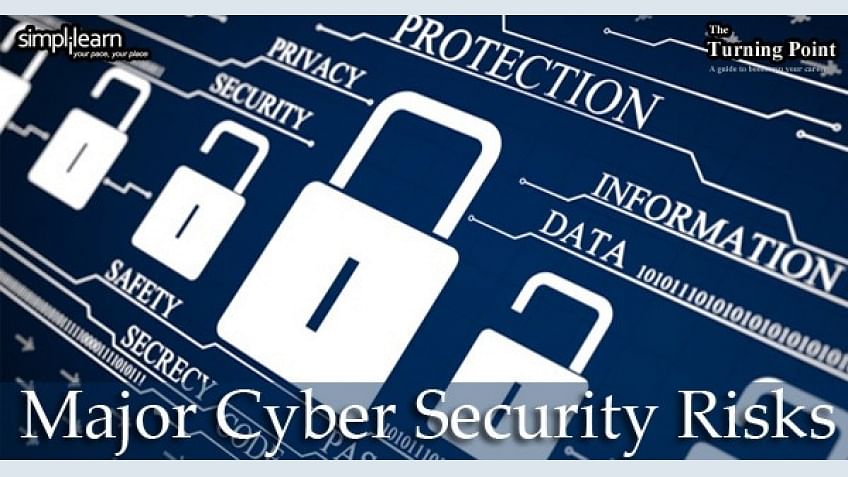 The past decade saw a tremendous increase in internet usage across the world and more and more businesses have an online presence. This impressive increase in both residential and business users means that the present day digital world is far more complex, there is more money invested in large online corporations and consequently, the security risks are more varied and sophisticated. When it comes to the criminal cyber world, the numbers are showing a steady increase in attacks, breaches and successful hacks. Many experts suggest that the eternal arms race between the system security experts versus the ever changing types of cyber attacks will continue and it will involve many professionals during the next years. IT departments and security professionals will continue to be at the top of the fight against cyber attacks and their role will be even more important in today's era of digitalization.Here is a list discussing the major security risks that must be taken into consideration when designing a successful and safe computer system:

Social engineering is considered the prime risk because of the newly popular and diverse social media websites. With the advent of Facebook, twitter, Linkedin and numerous other platforms, the hackers have almost endless attack routes to choose from. Social networks connect people, but through a string of similar friends and acquaintances, plus a very convincing profile and an unexpected friend request, they can become the best breeding ground for future hackers. These budding social hackers can grow uncontrollably and with the help of a poor security system, they can bring down even large businesses.

The new tech trend in computer systems is cloud computing. More companies than ever resort to this efficient computing system and the amount of information hosted on these cloud systems is staggering. Obviously, these systems are some of the more juicier targets for modern day hackers, as even a small breach of security can prove disastrous. To avoid any problems, businesses using this system must constantly discuss and demand the best security systems from their respective cloud service providers.

Many security experts and professionals know that some of the most dangerous cyber attacks come from the inside. These attacks have a devastating effect, mainly because a privileged user knows which data to use or destroy. Recent studies performed by CERT Insider Threat Center of the Carnegie University Software Engineering Institute and supported by the United States Secret Service have shown that inside malicious users are detected only after 32 months. The most vulnerable areas are the financial institutions, like banks and stock exchanges. Unfortunately, the only way to protect a company from this threat is a careful assessment of their own workforce, which is in itself a notoriously difficult task.

The recent implementation of the new HTML 5 protocol means that there is a high risk of security breaches in the system. The new protocol allows the connection of various technologies that might not work so safely together, thus allowing hackers to do their dirty work unnoticed. Even though HTML 5 has improved over the last two years, it is still a new protocol, and many developers still make mistakes, and some experts an increase in cyber attacks.

Advanced Persistent Threats (abbreviated as APTs) are directed attacks against businesses or organizations that try to steal and leak information quietly and unnoticed. Typically, with the help of social engineering, they slowly breach the defensive wall of an organization and gain access to the internal network. Good APT attacks are aimed at servers and can be very difficult to detect, mainly because they act slowly and during low work times. Generally, APTs can be detected when an abnormal traffic change is observed in the system, but the digits are hardly noticeable. The attacks are focused on common, rich information files, like Microsoft Word or PDF files. Similarly, other vector might be vulnerable, like embedded systems and mobile devices which are increasingly present in the work environment. This is why even the smaller and the least used digital device must be carefully secured (like tablets, smartphones and mobile hard disk drives).

BYOD – bring your own device – the all present modern day phenomenon is becoming increasingly difficult to control at the workplace. What it refers to is simple: the work environment has a huge number of new devices that can be connected to the internet. The office is filled with Android devices, iPhones, iPods and a variety of tablets and other gadgets that can act as gateways to savvy hackers. The users of these devices generally do not fully grasp the risks that they are exposed to and also expose the office environment to. These new devices have a variety of apps installed on them, some with poor security settings, that can bring in malicious add on software unnoticed. For instance, every modern smartphone has an incorporated high definition camera, a voice recorder, a sensitive microphone and other unexpected recording applications. The proficient hacker will see these gimmicks as ideal windows in the security system.

Malware has long been a powerful tool used by many expert hackers. But the new danger comes from the precision targeted malware, a special evolved type of malware attack. Their technique is greatly improved, the targets are better determined and they are designed to attack specific computer configurations and components. Vulnerable systems are social media platforms, including their respective accounts and groups, mobile devices and remote servers.

Botnets, like other cyber weapons, are getting more specialized, targeted and increasingly more dangerous. The cybercriminals know that these tools are their best assets and will continue to invest a lot of time, technology and funds into them. They become more widely available across diverse platforms and are easily distributed in almost every system. Takedowns launched by larger corporations, such as Microsoft or Adobe, work only temporarily, and it's only a matter of time before the cybercriminals improve their spam and malware tools. Simply put, they are learning from each step and constantly hone their hacking skills. To know more about IT Security Certification training please visit Simplilearn.

Chandana is working as a Senior Content Writer in Simplilearn.com and handles variety of creative writing jobs.

Vulnerability in Security: A Complete Overview