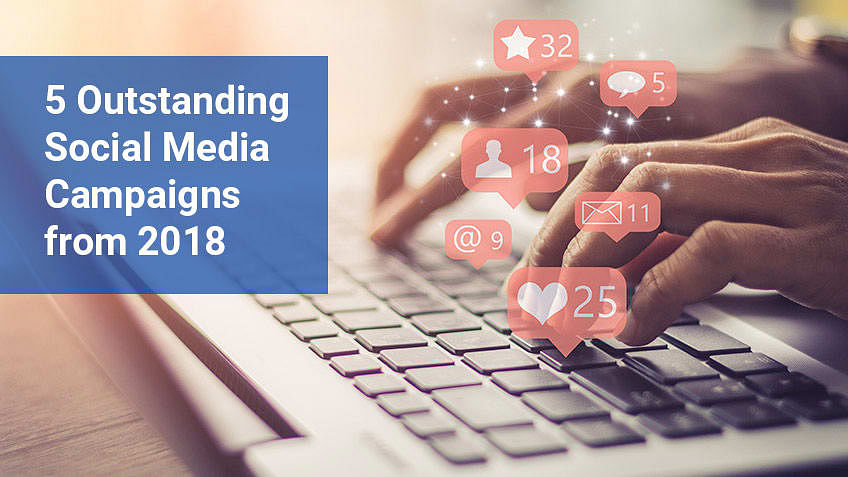 Remember when social media was just another means to get your brand name in front of customers? We’ve journeyed far from those simple days. Companies large and small are using social platforms to sell to, engage with and entertain potential buyers in entirely new ways. Here are five social media campaigns from 2018 in which companies pushed the boundaries of the medium.

Tech supergiant, Intuit, chose to launch the first brand campaign in the company’s history last year during the Super Bowl LII. The 15-second ad was only the flare to draw attention to a multi-channel social campaign targeted to small business.

Entitled “A Giant Story,” this campaign focuses on a 4-minute animated short film featuring two central characters⸺Pete, a struggling florist, and Pari, an inspired inventor. Pari uses her talents to create a helpful, giant robot, run on Intuit technology to help organize Pete’s struggling flower shop. Pari, Pete and our new giant metal friend made their debut on television but social media is where they’ll humanize the brand and have new adventures that advance the storyline while touting the benefits of Intuit small business solutions. The giant is already hashtagging his way across social channels (#agiantstory, #girlonfire) and even has his own Snapchat filter. The power of this campaign is that it features relatable characters and situations experienced by entrepreneurs. The robot is a metaphor that can go anywhere and do anything (across digital channels), ensuring Intuit will have an engaging story to tell for quite some time.

Online home goods retailer, Wayfair, earns kudos for marrying social media and e-commerce in new ways during 2018. Using the new shopping features rolled out from Instagram, Wayfair solved a problem common to many digital shops – incenting social followers to not simply look at the photo gallery, but to make a purchase. With the advent of product tagging on Instagram, Wayfair leveraged this ability to simplify the shopping process for their customers in an elegantly simple way. The Wayfair campaign allows consumers to experience what they expect to see in a traditional shopping environment – the products staged in a familiar environment.  Wayfair’s use of a new social tool creates a seamless user experience and caters to digestible content already appearing on Instagram.

Casper is a direct-to-consumer mattress company – one of many that have opened in the past several years. What makes Casper different is their wholly unique social media strategy⸺injecting humor into a “sleepy” industry. Casper is reaching audiences on Twitter with clever wit and thought-provoking content:

Where only 36 percent of businesses entice customers to purchase based on the use of humour in social media, Casper succeeds. Their strategy in 2018 has been to grow social engagement and brand loyalty by surfacing content that followers find amusing and relatable. Content simply about product features and benefits would see very little activity. As it is, Casper boasts a Twitter following of 113,000 and growing. To most online retailers, those kinds of numbers are a dream.

KFC: The Inside Joke

Not every social media campaign has to be shouted from the rooftops. Sometimes an understated, almost vague stunt can kick-start social engagement. In KFC’s case, their 2018 “11 Herbs and Spices” campaign took off when people started getting the joke. This year, the KFC brand stopped following nearly every other Twitter feed. Why? So they could only follow eleven individuals: The five original Spice Girls and six guys named Herb.

11 herbs and spices! Get it? No one did right away, until one intuitive Twitter user called KFC out on the joke. 11 herbs and spices, of course, is KFC’s signature secret recipe handed down straight from Colonel Sanders. The original discovery Tweet has been favorited more than 700,000 times and received more than 300,000 comments. KFC has continued the momentum with follow-up funnies.

This program demonstrates that a well-executed social campaign that allows the internet community to respond organically can reap rewards. Everyone wants to be in on the joke and now nearly everyone is.

Automobile manufacturer, MINI USA, is using Twitter to disrupt the car-shopping experience in 2018. The company is piloting a program – just in San Francisco and Los Angeles to start – in which a potential customer can bypass the often daunting car sales lot experience. Rather than hauling themselves to a dealership and fending off aggressive salespeople, the Twitterati can simply tweet #MINIonDemand to @MINIUSA to try out a MINI Countryman or Countryman Plug-in Hybrid. They receive a link to sign up for a free test-drive delivery. Once the information is entered and time scheduled, a MINI representative arrives with the requested car.

These 5 campaigns clearly demonstrate how brands are using social in innovative, surprising ways. 2018 saw a move from companies using social media just as a bullhorn to leveraging the platforms for more effective product sales, customer retention and brand loyalty. If these savvy campaigns inspired you to brush up on your social media marketing skills, Simplilearn has you covered. The Advanced Social Media Certification Training course will provide you with the skills you need to execute compelling social media campaigns of your own.