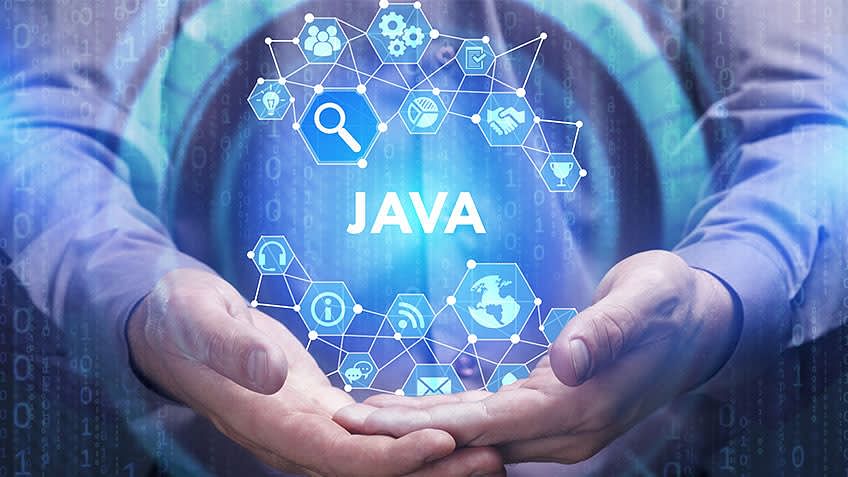 Java is a quarter-century old this year, and it continues to be one of the most popular programming languages today, despite the introduction of many newer and flashier languages and tools. The old boy keeps chugging along, enjoying the love from so many of today’s programmers and developers. You can find Java on over three billion devices, according to Oracle, which acquired Sun Microsystems, Java’s creator, back in 2010.

These four characteristics account for most of Java’s popularity:

These advantages, coupled with its widespread use, account for this venerable (for the digital world, anyway!) language’s continued popularity. Therefore, it’s no surprise that Java’s applications turn up in so many different places and industries.

Let’s begin by pointing out that the Android OS is closely based on Java, and that Android phones consistently garner a market share of over 85%. Add to this the fact that most mobile app developers call Java their official programming language. Java is compatible with app designing software such as Kotlin and Android Studio. Java Platform, Micro Edition (alternately called Java ME or J2ME) functions as a cross-platform framework for creating applications that work across all Java-support devices. Now take all of that and remember that mobile computing is outpacing desktop computing today, and you can see how you can’t escape Java.

Java Enterprise Edition (Java EE) is a popular platform that offers API and runtime environments for scripting tasks, including web services and network applications, to name a couple. According to Oracle, Java runs on 97% of enterprise-owned computers. Java is also recognized as being the foundation for many banking applications that use Java in their entire process, from front-end users to back-end servers. Lastly, Java’s capacity for sustaining high performance makes it a smart choice for high-frequency trading systems like Murex.

Java and the gaming industry are a match made in heaven. Java supports the jMonkey engine, one of the most potent 3D engines available today. And 2D games are a snap too; just couple Java with CSS, and you’re good to go. So, no matter what kind of games developers are designing, Java has them covered.

Big data is big news today, and it’s hardly surprising that Java is right there in the thick of it. Let’s start by pointing out that Hadoop, arguably the most well-known and well-used big data platform, is written in Java. Additionally, Scala, a competing programming language, owes its origins to Java. Scala was created to address some of Java’s drawbacks.

Four programming languages compete in the world of Big Data, all of them striving to be the best and most used: Java, Scala, R, and Python.

Big enterprises have big problems. That’s why these organizations turn to the Java EE platform to develop large-scale, multi-tiered network applications that are scalable, reliable, and secure. Java offers features that deliver a powerful app that is less complex by providing tools like a development model, API, and runtime environment. These features free up developers to concentrate more on the app’s functionality.

Distributed applications bring their unique challenges due to their distributed characteristics and the dynamic quality of the servers and systems that run them. The Java Intelligent Networking Infrastructure, or JINI for short, represents an infrastructure that provides, registers, and finds distributed services by their specifications. JavaSpaces, a JINI component, supports distribution, persistence, and object migration within a network.

Ask a sampling of IT professionals what the three most important elements of today’s digital world are, and most will reply, “Big Data, the Internet of Things (IoT), and cloud computing.” So, it’s hardly surprising that Java has found its way into the cloud.

There are many Java Cloud development tools available, such as the Oracle Java Cloud Service. It serves as a platform for easily creating and configuring Oracle WebLogic servers and their application environments.

Software tools or software development tools are used by developers to build, debug, and maintain other software programs and applications. There are many software tools written in Java. For example, Netbeans, IntelliJ IDEA, and Eclipse are all IDEs written and developed in Java.

Today, the most popular operating systems for mobile phones are iOS and Android. However, there are a number of mobiles phones and personal digital assistants that use J2ME (Java 2 Platform, Micro Edition). J2ME is popularly used to develop products like blu-ray, set-top boxes, cards, etc. J2ME applications are expected to become even more popular in the next few years.

The financial industry requires a number of server applications to run their day-to-day businesses like data processing, trading systems, confirmation systems, etc. Java is commonly used to write these server-side applications. Some of the leading financial institutions like CitiGroup, Goldman Sachs, and Barclays use Java-based applications for their businesses.

We never even touched upon two other concepts that also benefit from Java. If you’ve been following any of the news about developing self-driving cars, then whether you realize it or not, you’re being exposed to more Java. By combining robotics, artificial intelligence, and Java programming, the concept of self-driving cars gets closer to becoming a commonplace sight on our roads.

Furthermore, the rapidly-growing IoT increasingly relies on Java thanks to the language’s flexibility, adaptability, and ubiquity.

That concludes our list, though there are even more Java applications out there to be still explored. While there is a lot of programming language competition out there, Java continues to be the most popular, widely accepted language in use today.

Want to Learn More About Java?

If all this talk of Java has piqued your curiosity, then check out the kind of questions you could expect if you’re interviewing for a Java developer position. Next, take a look at what skills a Java developer needs to earn more in today’s market. The last article is especially valuable if you are already a Java developer but are interested in upskilling.

Getting a Start on Your Java-related Career

If you’re not currently in a Java-related career but would like to change that, then Simplilearn has just what you need. Start with the basics by taking the Java Certification Training Course. If you’re looking to master web application development for virtually any computing platform, then you’ve come to the right place. This all-in-one Java training gives you a firm foundation in Java, the most commonly used programming language in software development.

Available in self-paced learning, Blended Learning, or a corporate training solution, you get 70 hours of training, 35 coding-related exercises using Core Java 8, and, once you pass the exam, you’re certified!

Once you have mastered this basic training course, it’s time to take your Java skills to the next level with the Full Stack Java Developer Master’s Program. This course advances your career as a Full Stack Developer. You learn top Java-related skills demanded in today’s IT industry, including Angular, Spring Boot, Hibernate, Servlets, and JSPs, as well as MVC, web services, and SOA to build highly web scalable apps.

Full-stack developers earn an average annual salary of $105,813, and the demand is high. So check out Simplilearn and see how you can advance your Java career today!