HomeResourcesSoftware DevelopmentPython vs. Node.js: How Are They Different, and How Do You Choose Between Them

Python vs. Node.js: How Are They Different, and How Do You Choose Between Them 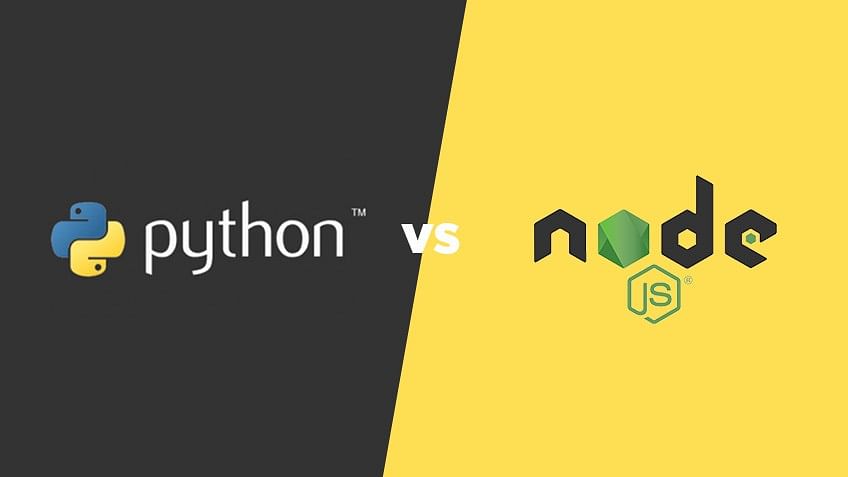 Head-to-head comparisons are a useful tool when trying to decide between two excellent products. Developers today have so many resources to choose from that it becomes a daunting task just to make the right choices.

In the spirit of simplifying things, we present to you a head-to-head comparison of Python vs Node.JS. We will investigate each tool in detail, exploring what they are and why they’re useful, then explore their differences and similarities.

In this comparison of Python vs Node.JS, we  will start the ball rolling with Python.

When it comes to explaining Python, no one does it better than the Python Software Foundation, the programming language's organization. The PSF summarizes Python as “…an interpreted, object-oriented, high-level programming language with dynamic semantics. Its high-level built-in data structures, combined with dynamic typing and dynamic binding, make it very attractive for Rapid Application Development, as well as for use as a scripting or glue language to connect existing components together.”

In summary, Python’s advantages include:

In keeping with getting the definitive word from the source, Nodejs.org defines it as “…a JavaScript runtime built on Chrome's V8 JavaScript engine.” Developers use Node.js to quickly build scalable, fast network applications, by means of a non-blocking, event-driven I/O model that makes the platform lightweight and efficient.

Node.js is an open-source, cross-platform (e.g., Windows, Linux, Unix, Mac OS X), back-end, server environment that lets developers write JavaScript code to run directly in a computer process rather than in a browser.

According to the 2020 Stack Overflow Developers Survey, Node.js came in at number one in the “Frameworks, Libraries, and Tolls” category — garnering 51.4 percent of the vote, far outranking the next best, .NET at 35.1 percent.

Node.js is an excellent resource for Java full-stack web developers and full-stack MEAN developers. Both types of developers will most likely encounter situations where they need to use Node.js.

To sum up the advantages of Node.js:

Before we talk about differences (and even some similarities) between Python vs Node.JS, we need to make one thing clear: Python is a programming language, and Node.js is a runtime environment for JavaScript. When programmers use Node.js, they are using the same language for the front and back ends. So, Python is a language, JavaScript is a language, and Node.js is a tool that uses JavaScript. Now that we have established what these development tools are, let’s make a closer comparison between Python vs Node.JS.

Here’s a quick-reference chart that sums up the differences between Python vs Node.JS.

Do You Want a Career as a Web Developer?

We hope that this article has served as a good Python vs Node.JS guide.There is a greater than ever demand for developers, and Simplilearn can help you get your training in this fantastic career. Simplilearn’s Python certification course covers Python’s fundamentals and how to apply them to real-world applications. The modules, lesson-end projects, and assignments comprising the curriculum cover data operations in Python, strings, conditional statements, error handling, shell scripting, web scraping, and the commonly used Python web framework Django.

On the other hand, if you want to learn Node.js, check out the Node.js certification training course. The course helps you gain an in-depth knowledge of Node.js concepts such as Express.js, Node Packet Manager (NPM), shrinkwrap, NPM Vet, REST, Express.js with MongoDB, and SQLite CRUD operations. The course also focuses on the essential concepts of Node.js and provides hands-on experience in building an HTTP server.

Of course, you don’t have to choose between them — you can always take both! After all, a good programmer should have many different development skills in their skillset.

Speaking of having more skills, after you’ve benefited from the Python and Node.js courses, consider taking your developer career to newer and greater heights with the Automation Test Engineer Master’s course. The automation test engineer training program is designed to provide you with complete knowledge of software testing technologies such as Selenium Web Driver, TestNG, Maven, AutoIT, Selenium Grid, Appium, and Docker — training you in how to apply engineering principles to software development processes.

Visit Simplilearn today, and get started on a new career path that offers security, opportunity, and marvelous rewards!

Python vs Javascript: Difference Between Python and Javascript