HomeResourcesSoftware DevelopmentScala vs. Java: Differences, Ideal Applications, and Who Should Learn Them 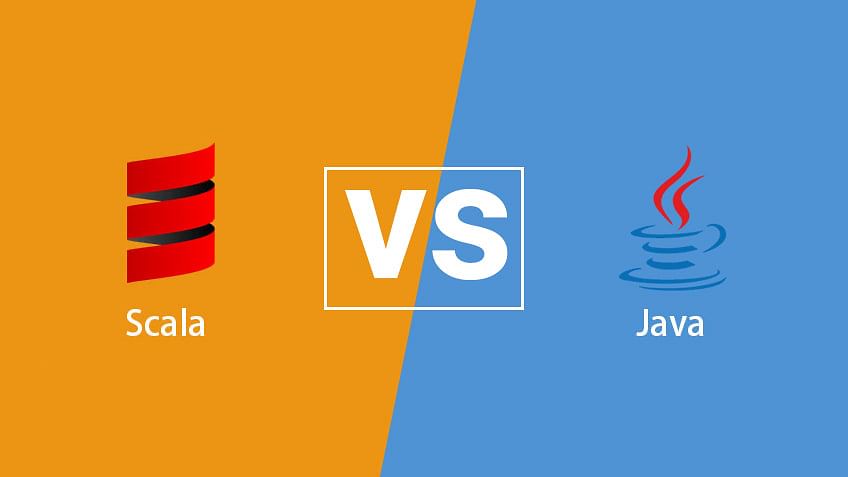 This article covers informative topics such as the difference between Scala and Java, what Java is used for, what is Scala used for, why Java is so popular, and many other valuable insights for programmers and developers.

We begin with the senior member, Java.

Java application source codes are compiled to bytecode, which runs on any Java virtual machine (JVM), regardless of the architecture. It’s a fast, reliable, secure language designed to have as few implementation dependencies as possible. Java is a “write once, run anywhere” programming language, and traditionally ranked in the top five languages.

The Advantages of Java

A programming language doesn’t stay relevant for so long without offering a generous and useful number of features. Here’s a rundown of Java’s benefits:

The Disadvantages of Java

No language is perfect, and that goes for Java. Although it’s been around a while and has undergone several updates, some issues persist. When considering Sala vs. Java, you should know some of Java’s notable drawbacks.

In this Scala vs. Java comparison, let’s dig into Scala. Scala is a general-purpose, high-level, statically-typed programming language that incorporates object-oriented and functional programming. Though primarily used with the JVM (Java Virtual Machine) platform, you can also use Scala to write software for other platforms. It features native platforms that use Scala-native and JavaScript runtimes through Scala.

Scala, released in 2004, is a highly scalable language, a characteristic that gives the language its name. It’s a portmanteau of the words “scalable” and “language.” ZDNet cites Scala as one of the more popular programming languages likely to get you a job interview. Scala was created to express general programming patterns in a concise, refined, and type-safe way.

The Advantages of Scala

If a programming language wants to challenge Java’s dominance, it should offer programmers some attractive features. To that end, Scala brings many positives to the table. Here’s a sample of its benefits:

The Disadvantages of Scala vs. Java

How Are Java and Scala Alike?

Here are the ways Scala vs. Java are alike:

How Are Scala vs. Java Different?

Here is where the real comparison lies. Although we have already mentioned some of these items, we’ll touch on these again for a more direct comparison.

Java is a popular and well-established programming language commonly used in the following applications, among others:

Here is a limited list of companies that reportedly use Java:

It’s safe to say that this lineup should help allay doubts and fears for the future of Java developers. If this list is any indication, Java shows no signs of leaving the spotlight anytime soon.

Why Use Scala vs. Java?

Although newer than Java, Scala has distinguished itself in designing the following applications:

Here are some companies that use Scala:

That’s an imposing, impressive lineup. It’s easy to see why a new language like Scala is challenging the old guard.

So, Who Should Learn Which Language?

Given its continued popularity, programmers who want a broader and more versatile skillset should take the time to learn Java if they already haven’t. But let’s take a closer look at specific professionals. Which language—Scala vs. Java— suits which IT professional?

It would be best if you learned Java if you want a career in any of the following professions:

And you should learn Scala if you’re vying for any of these positions:

And of course, each language—Scala vs. Java—require platform-specific programmers, along with each respective variant (e.g., Java Programmers, Scala Programmers).

However, you can make a case for learning both languages. After all, they both share some common ground. But even more important, the best IT professionals are the ones with a varied and extensive skillset. There’s no such thing as having too many skills in the world of IT. Every IT professional, regardless of experience, can benefit from upskilling, including learning new programming languages.

Do You Want to Learn Scala and Java?

Now that you see where each programming language stands, you’re probably wondering where to start. Fortunately, Simplilearn offers a vast selection of IT training courses and bootcamps, all to bolster your skills and get you ready for a better career.

Take the Java Certification Training course and become familiar with one of the world’s most popular programming languages. This all-in-one Java training gives you a firm foundation in Java, from introductory techniques to advanced programming skills. The course provides you with knowledge of Core Java 8, arrays, constructors, operators, loops, and methods while giving you the necessary hands-on experience in JDBC and JUnit frameworks. You couldn’t find a better resource to explain the features of Java than this.

Or, if you’re more interested in Scala vs. Java, you need to take the Apache Spark and Scala Certification Training course. This Spark certification training course helps you master both the essential skills of the Apache Spark open-source framework and the Scala programming language. The course teaches you about Spark Streaming, Spark SQL, machine learning programming, GraphX programming, and Shell Scripting Spark.

According to Indeed, Java developers earn a yearly average of USD 104,502. ZipRecruiter says that Scala developers can earn an average of USD 139,292 annually. Both languages are in demand, so check out Simplilearn today, broaden your horizons, and improve your career prospects!

Getting Started with Scala Programming