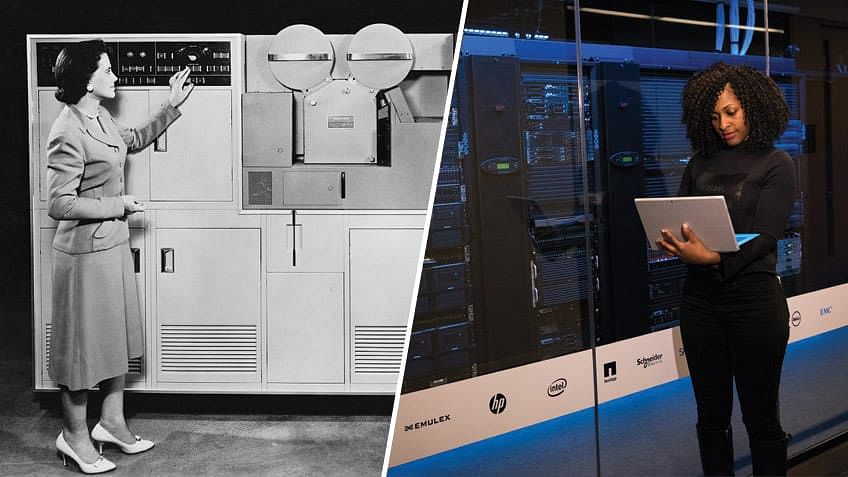 Given the low numbers of women working in computer fields in the U.S., it’s clear we still have a ways to go in bridging the STEM gender gap. But women have been working with computers since the very beginning. Things seem to be changing as more women graduate with computer science degrees and enter the workforce.

What stories have we overlooked about women in the early days of computing? And what does the future hold? With International Women’s Day approaching, there’s no better time to look at this fascinating piece of history.

The History of Women in Computing

There are many public voices claiming women are not biologically suited for computing careers, such as the famous Google Manifesto (that claims women have higher anxiety and lower stress tolerance), and plenty of other opinion pieces easily found by search for the subject. But if this is true, how is it that women have been working with computers since the very beginning? Let’s take a very brief look at the history of women in computing to clear our heads about any misconceptions about whether or not women “belong” in tech:

This is only a brief list, summarizing the many—and important—roles women have played in computing since the very beginning. You can read more about the history of women in computing in this useful and thought-provoking article. But it makes our point:  if women played such a pivotal role in in the past, why has the ratio of women to men continued to decrease?

A Bump in the Road

Despite this impressive legacy summarized above, sometime around 1984, women started disappearing from the computer science programs at universities. While 37 percent of students were women during the 1984-85 school year, the number dropped dramatically right after. The radio show Planet Money spent some time trying to discover why. They concluded that when personal computers started showing up in homes and marketing for these computers was aimed exclusively at men and boys, all of a sudden, boys had an advantage when studying computer science in college: They had experience. While in the 1970s, men and women were on a level playing field in the computing classes because neither had a computer at home, by the 1980s, men were showing up to class with a distinct advantage.

By 2011, only 17.6 percent of computer science students were women.

That gender gap has persisted. Today only 18 percent of software developers in the U.S. are women.

But there is hope, because the situation is changing because educational systems and non-profits are making it happen. We’ve seen explosive growth among non-profit groups dedicated to closing the gender gap in technology—groups such as TechGirlz, a nonprofit offering workshops for girls in middle school, and Girls Who Code, an organization offering after-school and summer programs for girls of all ages.

Due to these concerted efforts to bring about change, women now make up more than half of computer science graduates entering the workforce. So now what?

Will It Be an Uphill Battle?

The numbers look promising, to be sure. But the battle is not over. More women are going into computing careers, but they are staying stuck in junior positions, and they’re not proportionately represented in leadership roles. Although it’s not tech-specific, it’s still telling that the State of California had to pass a law saying corporations had to put women on their boards, and California is the home of Silicon Valley.

Given the ever-increasing number of jobs available, however, the battle might be won by sheer numbers if not by diversity efforts. The Bureau of Labor Statistics (BLS) predicts the number of software developer jobs in the U.S. will grow by 24 percent by 2026. We currently have 250,000 unfilled software developer jobs in the U.S. Can women take on these roles and turn the tide? Just as women were recruited to be human computers because of the shortage of men during WW II, perhaps the sheer demand for qualified workers will break down barriers and eliminate the gender gaps for good.

Do You Want to Be Part of the Next Wave?

To get started, you can earn a certification in any number of programming languages, such as C or Python, and go from there. As you progress in your career, you can choose to specialize in Artificial Intelligence or blockchain or mobile apps…or some other emerging technology we have yet to see. Or you could learn enough to become a full stack web developer or automation test engineer. When it comes to software development, the possibilities are many—and constantly increasing.

Will the number of women in tech careers start moving in the right direction? Better yet, will you be there among the women gravitating toward STEM fields?