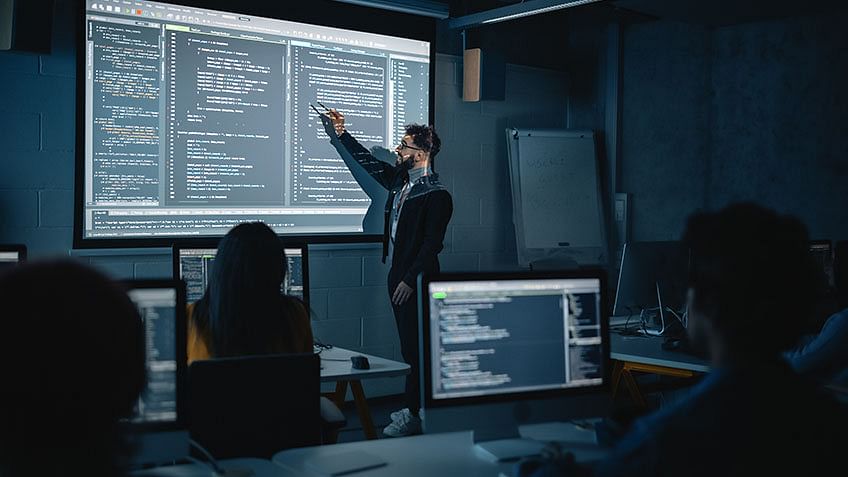 What Is a Socket in Java?

In the Java programming language, a socket is defined as an endpoint of a communication link that is established between two nodes or two machines in a network. It has an IP address and port number assigned to it. In Java programming, one can make use of the Socket class and its inbuilt methods to create and maintain a socket in the network. There are two different types of sockets present in socket programming, known as server socket and client socket. The socket present at the client end is called the client socket and on the side of the server is called the server socket. Initially, as mentioned above, the programmer needs to create two sockets and assign them the IP address along with the port number. As next steps, care needs to be taken of the client-side programming and the server-side programming.

To enable communication between two machines there must be sockets present at both endpoints. Using the socket class in java, one can create sockets. Another important thing is that the client must know the IP address of the machine on which the server is present.  One can create a socket with a single line of code:

Finally, once the purpose is fulfilled the programmer needs to close the connection established earlier.

Let us have a look at the Java implementation of client-side programming.

// A Java program for a ClientSide

// sends output to the socket

}// string to read message from input

// keep reading until "Over" is input

We are aware of the fact that to enable communication between two machines there must be sockets present at both endpoints. Using the Socket class in java, one can create a socket with a single line of code:

This means that if the protocol is maintained and followed properly, then the request would be accepted by the server.

Once the connection is accepted, a new socket along with the client socket will be assigned to the server with the same port number 4000. Thus the new socket object maintains direct communication with the client. Hence one can write and read the messages to and fro from server to client. This connection enables the continual transfer of data between the client and server.

Finally, once the purpose is fulfilled the client sends a request to the server to terminate the connection between the client socket and server socket.

Let us understand some of the important points in socket programming.

To run on Terminal or Command Prompt

The Java codes for both the client-side and the server-side are saved in a file with the .java extension. These codes can be made to run on the terminal (in UNIX-based systems) or in the command prompt (in Windows systems). There are certain steps to be followed while running the programs via terminal or command prompt.

Server: Server Started, successfully!! And waiting for the connections to

Client: The client started, successfully!! And ready to send requests to

the Server. (sends a connection request to the server)

This message is shown at the server end as well

Server: HI and over

By sending the word ‘over’ the connection is closed.

Basically, a socket and socket class are the most important things in a connection-oriented protocol. The socket class consists of all required input parameters and the methods which help the programmers from the creation of sockets to data transfer between the sockets. It also enables both synchronous and asynchronous transfer of data between the ends.

Here is a list of important methods that are present in the Socket Class:

Another important class in socket programming is ServerSocket class. This class implements server sockets. A server socket waits for requests to come in over the network. It performs some operation based on that request, and then possibly returns a result to the client.

Here is a list of important methods that are present in the Socket Class:

The term TCP stands for Transmission Control Protocol. It is also known as a connection-oriented protocol. It is one of the most widely used protocols used in the IP suite. It enables the computer machines to establish connections between them across the network and transfer the data packets. Error detection, and reliable communication are some of its features.

We have seen earlier that there are two types of sockets in computer networking. They are client socket and server socket. A server socket waits for a request from a client, whereas a client socket helps in establishing communication between the client and the server.

Socket plays a major role in computer networking concepts. These are considered to be the endpoints for a communication line. In order to establish a connection between two machines firstly, two sockets have to be created at both the server and client end. The server end socket is taken care of by the ServerCocket class and the client end socket is taken care of by the Server class in Java programming language. The client has the necessity to get to know the details of the IP address and the port number in order to connect to the server.

Using a single line of java code, a server end socket can be created.

One can create a socket with a single line of code:

The client end socket waits for the acceptance of the request from the server’s end.

Fig: Representation of SOCKET API at client and server ends

We can test the server and client end codes using terminal or the command prompt or any other IDEs. Some of the steps are mentioned below:

Using Intellij or Other IDEs

Hope this article was able to give you a thorough understanding of Socket programming in Java. If you are looking to enhance your skills further, we would recommend you check Simplilearn’s Post Graduate Program in Full Stack Web Development. This course is made in collaboration with Caltech CTME. It can help you hone the relevant software development skills and make you job-ready in just 6 months.

If you have any queries or doubts, feel free to post them in the comments section below. Our team will get back to you at the earliest.