The Best Guide To Understand What Is TCP/IP Model

Lesson 28 of 61By Kartik Menon 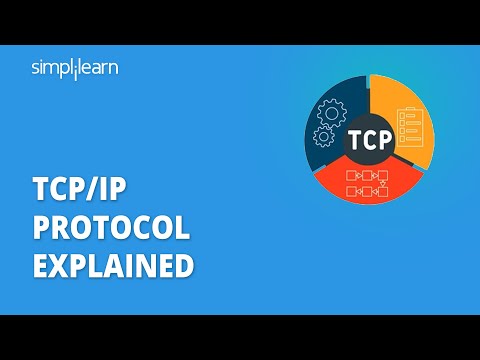 The excess requirement of efficient and error-free data transmission over communication channels leads us to the discussion of the topic - what is the TCP/IP model. This tutorial will easily help to make you understand the basis and need for the TCP/IP model in the network domain. The TCP/IP is needed for implementing various network applications during the transmission of data and information over the communication channel.

What Is TCP/IP Model?

The TCP/IP model refers to the Transmission Control Protocol/Internet Protocol Model. This model is a part of the network domain designed specifically for overseeing efficient and error-free transmission of data.

The model works on a four-layered architecture model, where each layer implicit the required network protocols on the data to be transmitted, which remodels the data to the most optimum structure for efficient transmission over the network.

In this tutorial on what is TCP/IP model is, you will understand the working of each layer in detail to better understand the functioning of the model.

Features of the TCP/IP Model

Below mentioned are some of the features that make the TCP/IP model stand out in the network concepts:

Now go ahead and continue with the next topic in this tutorial on ‘what is TCP/ IP model’, which includes the layers of the TCP/IP model.

Layers of the TCP/IP Model

In this section, you will understand the different layers of the model and their functionality in the network concept:

The TCP/IP model is divided into four different layers:

Each layer performs a specific task on the data that is being transmitted over the network channel, and data moves from one layer to another in a preset pattern as mentioned below:

The above model represents the flow of data when it is being transmitted from the sender side. In the case of data being received, the layers of the model work in reverse order.

Now, take a look at each of the layers in detail:

The application layer maintains a smooth connection between the application and user for data exchange and offers various features as remote handling of the system, e-mail services, etc.

Some of the protocols used in this layer are:

Now, move on to the next layer,

This layer is responsible for establishing the connection between the sender and the receiver device and also performs the task of dividing the data from the application layer into packets, which are then used to create sequences.

It also performs the task of maintaining the data, i.e., to be transmitted without error, and controls the data flow rate over the communication channel for smooth transmission of data.

The protocols used in this layer are:

Moving on to the next layer, you have -

This layer performs many important functions in the TCP/IP model, some of which are:

Some of the protocols applied in this layer are:

This layer is the combination of data-link and physical layer, where it is responsible for maintaining the task of sending and receiving data in raw bits, i.e., in binary format over the physical communication modes in the network channel.

The TCP/IP model was designed in the 1960s to maintain and explain the transmission of data, whereas the OSI model is a network concept specifically for explaining the communication and working of data and protocols during the transmission of information.

In this ‘What is TCP/IP model’ tutorial, you understood the network communication details about data, which includes the basic idea behind the working of the model, the functioning of each layer in the model, and also how the data is restructured to achieve efficient transmission over the communication channel.

To better understand the working of each layer and the different steps they take during the data transmission over the network from a professional point of view, you can refer to Simplilearn’s Cyber Security Expert course, which will allow you to gain in-depth knowledge about the network functions and working of the model at a whole new level.

Do you have any questions related to this tutorial on ‘What is TCP/IP model?’ If yes, feel free to mention them in the comments section at the bottom of this page. Our team will help you solve your queries ASAP.