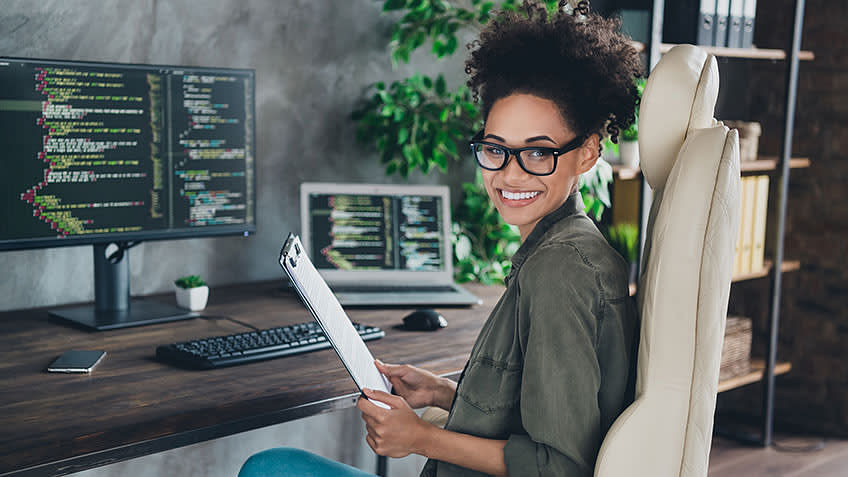 There is an ever-increasing demand for apps today, especially for mobile devices. Consequently, the IT industry needs more professionals to create these eagerly desired applications. So, it’s safe to say that the careers of programmer or coder offer not only job security but also plenty of choices for employment. In fact, the industry is currently suffering from a skills shortage.

However, if you want to sustain a long-term career in coding or programming, you need to land at a company that pays a good wage. Unfortunately, although many businesses desperately need app developers, it doesn't guarantee that they'll pay well. Maybe they can't attract talent because they don't pay well enough!

Today, we will look at U.S. coding salaries and, to a lesser extent, U.S. programming salaries. We'll even devote a little time to exploring what full-stack developer salaries in the U.S. look like.

We have a lot of ground to go over, so let's jump in. First, we begin with some background.

A Brief History of Coding

How old do you think coding is? Would you believe almost two centuries old? Here’s a bullet timeline outlining coding’s history.

What’s the Difference Between Coding and Programming?

Though many people use these words interchangeably, there are significant differences between coding and programming. Computer code is the system of rules or sets of instructions written in any given programming language. So, coding is the process of translating our human language into lines of code that the computer can understand, and it’s the first step to developing a piece of software. Coding languages include Java, JavaScript, Python, and PHP.

On the other hand, programming is the task of creating an executable computer program that follows a set of instructions. Coding is actually considered part of the programming process. Computers can’t understand English, so the coder facilitates communication by converting the language into a computer language, then programmers create the application that handles all the tasks required.

The State of Coding and Programming Today

According to the figures provided by the U.S. Bureau of Labor Statistics, Information Technology and general computer employment will grow 13 percent between 2020 and 2030, a growth rate faster than the rate across all occupations, which clocks in at 8 percent. This data indicates that we'll need coders and programmers for at least another decade.

Furthermore, the BLS projects that software developers (including programming and coding) will grow at an even higher rate, 22 percent, from 2020 to 2030!

Coding and programming skills remain relevant today. Think of it: the OS your device uses, the apps you run on that device, and even this website, are all possible thanks to coding and programming. As long as there is a need to facilitate communication between humans and computers, and as long as people keep demanding new apps and software, there will be an ever-present need for coders and programmers.

So, where are the best U.S. coding salaries?

According to Indeed, here are the nine U.S. cities that pay the best salaries for computer coding specialists. We also give you a glimpse at full-stack developers in the U.S. by showing what happens if you expand to full-stack development from coding. Note that these figures can vary from week to week, depending on factors such as position availability and the number of coding professionals in the area:

Next, here are the nine cities that pay the best U.S. computer programming salaries, according to Indeed.

We will need more coders, programmers, and full-stack developers in the foreseeable future, so if you’re looking for a secure, in-demand career that pays well, look no further than coding! And the good news is, Simplilearn can help you realize your goal and earn a top U.S. coding salary thanks to their Caltech Coding Bootcamp.

This bootcamp, held in conjunction with Caltech's Center for Technology and Management Education (CTME), will give you a solid understanding of both front-end and back-end Java technologies, beginning with the basics and moving on to the advanced aspects of Full Stack Web Development. The bootcamp teaches you Angular, Spring Boot, web services, JSPs, and MongoDB, all the elements you need to kick off your new career as a full-stack developer.

Check out Simplilearn and take advantage of the coding bootcamp and other bootcamps on a wide variety of IT and programming-related topics. Prepare yourself for the digital future with the complete skill set that today's recruiters look for. Visit Simplilearn today!

SAS Salary Around the Globe