HomeResourcesSoftware DevelopmentBuilding a Career as a Web Designer vs. Web Developer: Key Differences and Tips

Building a Career as a Web Designer vs. Web Developer: Key Differences and Tips 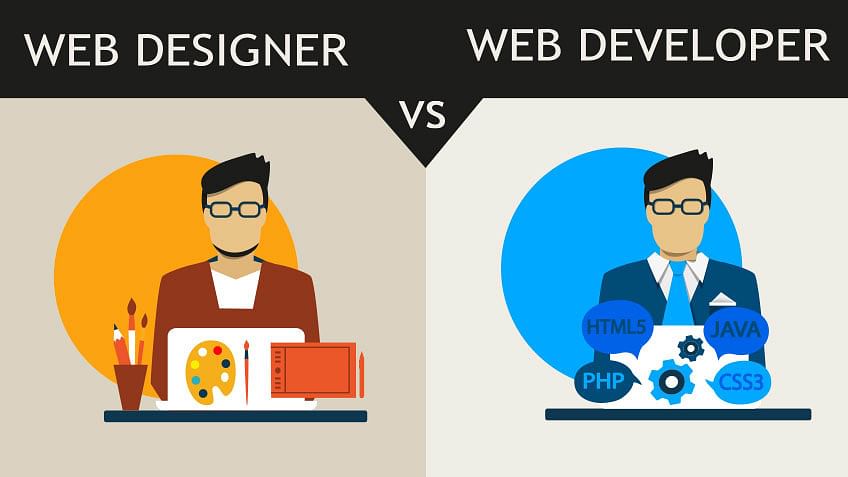 A website sees the light of the day because of a concerted effort of both the web designer and the web developer. It’s easy to get mixed up as they use some common tools and share some skill sets. However, designers and developers have very distinct roles and are involved in very different areas of website development.

Let’s find out the difference between web designer and web developer.

A web designer is like an architect who develops a vision of the website, its look, feel, and function. The main tasks of the designer range from user research and information architecture to typography and UI (user interface) design.

A web developer acts like a construction worker, turning the architect’s vision into a functional website. A developer uses programming languages like HTML, JavaScript, CSS to build the website’s framework, fix bugs, and make it functional. Developers have to cover a wide set of tasks, from programming the UI to maintaining the server-side of websites.

1. User Experience (UX) Designer – a UX designer is responsible for figuring out what a site’s users and potential users want, whether their demands are getting fulfilled after using the site, determining user stories, building user personas, and performing user testing. The designer must make sure the website exhibits a logical flow, all interactions are intuitive, and fulfill user needs.

2. User Interface (UI) Designer – a UI designer is responsible for developing clean and attractive UI designs based on information gathered by UX designers. Job responsibilities include creating graphics, illustrations using artwork and typography to enhance the visual display and layout.

3. Visual Designer – a Visual designer role can be termed a hybrid between the roles of a graphic designer and UI designer, with the focus being on making the completed product more attractive—typical responsibilities including typography, layout, imagery, spacing, color palettes, etc.

Web developers are split into three types based on their different job roles:

1. Front-end Developer – the front end or client-side of a website is that part with which the user interacts directly. A front-end developer is responsible for coding the website’s mockup design and implementing site layout, interactivity, and visual aspects by using programming languages like HTML, CSS, and JavaScript.

2. Back-end Developer – back-end refers to the server-side of a website – the part you cannot see and interact with. A back-end developer is responsible for writing and maintaining code that powers the front-end. Job duties involve writing APIs, building libraries, working with system components, etc.

3. Full-stack Developer – a full stack developer needs to possess sufficient knowledge in both front-end and back-end development. The developer must make sure the front end and back end of the website are in sync and work smoothly together. They work on front end, back end, database, and debugging of websites.

Besides these technical skills, web designers and web developers also need non-technical skillsets like strong communication and collaboration skills, problem-solving, and analytical thinking abilities to be successful in their field.

Both web designers and web developers play an important role in website development and maintenance. However, the key differences between the two roles are:

When to Know Web Designer vs Web Developer - Which One to Go For?

A web developer is a right choice for projects like:

Tips for Choosing the Right Career Path for You

With more and more businesses moving online every day, it’s never been better to pursue a career in website building. Firstly though, you need to decide whether you want to work as a web designer or a web developer.

A good starting point can be asking yourself which aspects of website building you are most interested in. If you prefer the visual design, website designing can be the ideal career path for you. However, if coding is what intrigues you the most, a role as a web developer can be your perfect match. Consider the skills and attributes required in both job positions and compare those to your current skills sets or the skills you’re keen on learning. There are numerous resources to expand your skillset and advance your career.

Plus, we recommend considering critical aspects like career progression opportunities, market demand, and potential for growth for each of the job roles web designer vs web developer before taking the plunge.

How can you overlook the financial part? The average web designer and web developer salaries vary according to a few factors like skills, expertise level, location, and area of specialty. The more experience and relevant skills you acquire, the higher salary you can charge from employers.

The most important question – who earns more: web designers or web developers?

Generally speaking, web developers earn more than web designers, but the salaries depend on the types of job roles and the skill sets you to bring to the table.

Web designer salaries can vary depending on web designing job role, location, and years of experience.

Web developer salaries tend to be higher than web designer salaries primarily because of the coding skills of developers, which is highly valued in today’s increasingly digital world.

When considering whether you want to become a web designer vs web developer, keep in mind that both roles are ultimately working to achieve the same goal: To create great websites. While for a web developer, the fundamental knowledge of programming and some basic coding skills are necessary to make an entry into this field; web designers too can gain immensely from upskilling in these areas. No matter which direction you end up choosing, industry-recognized courses like Simplilearn’s full stack web development certification can help you shape your career in the field of web design and development.