What Is Ruby on Rails (ROR)? Advantages, Future and Salary

Lesson 33 of 33By Simplilearn 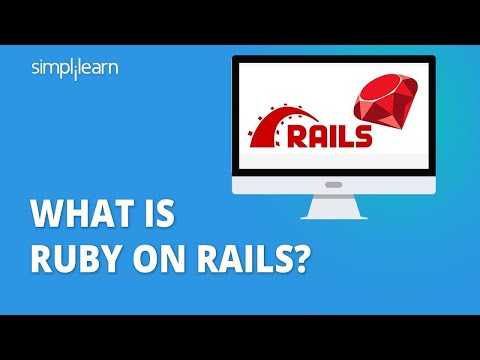 Ruby on Rails (or simply Rails) is an MVC (model view controller)-based framework used for web development and app programming at the server-side of the applications. In the world of web development, web frameworks are based on a specific programming language. For example, AngularJS is a JavaScript-based web framework. This means that all libraries contained in AngularJS are written in Javascript. In the same way, Rails is a framework written in the Ruby language and extends Ruby to solve problems without a programmer having to reinvent anything.

Ruby on Rails developers prefer it for its time-saving qualities when writing code. The efficiency of Ruby on Rails is due to its ready-made code libraries that contain upfront solutions, thereby saving the time needed to perform repetitive tasks such as building forms, menus, and tables.

In this article, we will explore Rails programming and provide you with relevant resources to help put you on a course toward lucrative career options such as an automation test engineer. Learning Ruby will also equip you for full-stack development.

Basics Concepts of Ruby on Rails

Whether you’re a seasoned programmer or have never written a line of code, your decision to learn Ruby will open you to new career possibilities. Back when Ruby first started, it was just a single file. Today, however, it has grown into a glossary of terms, some of which include:

Getting Familiar with Rails

You can learn Ruby on rails programming from several reliable sources. Rails Guides, for instance, has a comprehensive guide that covers the following areas:

3. Getting your application connected to a database

5. Layout of applications created with Rails

6. How to get started using Rails immediately?

Thinkful also has a Ruby on Rails tutorial that covers these and other topics, but a critical element that they point out is the need to pick a goal. They recommend applying your skills to something unique but simple. If you have a small but nagging problem that you can solve with your new programming skills, learn Ruby, and apply your skills to solve it. After a lot of practice on small goals, you will be able to handle more significant projects.

Note that although a beginner can learn Rails and become proficient very quickly, prior knowledge of Ruby language is an added plus as it will shorten your learning curve. While Ruby will equip you for full-stack development, Ruby garage also recommends learning CSS, JavaScript, and HTML to understand the basics of front end development better. While all of this might seem like a lot to learn, it is also a great way to work toward more lucrative salary brackets in Java development, so you’ll never lose by learning these additional programming languages.

Note, however, that Ruby is sufficient to help you get started coding, and you can map all of the other languages in your career path.

According to the 2019 stack overflow survey, more than 97,000 developers rank Ruby on Rails, the 12th most popular programming language and the 11th most broadly used web framework. 50.3 percent of developers already using Ruby on Rails expressed their interest to continue using the language.

Figure 1: Ruby on Rails is the 11th most popular web framework

Figure 2: Number of websites built on Ruby on Rails

Although detractors of Ruby maintain that it’s dying or dead, the numbers beg to differ. An analysis conducted by Bacancy Technology shows that approximately 1.4 million websites are built on Ruby on Rails. The websites range from across different industries and include popular websites such as Kickstarter, Basecamp, Zendesk, Slideshare, CrunchBase, Airbnb, and Shopify.

Some reasons for its continuing popularity include:

Also, Ruby is always evolving as its creators and support community are always working to improve it.  For example, the 2020 planned release of Ruby 3 is expected to be three times faster (Ruby 3x3). Faster speed will enhance user experience in different quarters, including gaming.

Career Prospects for Ruby on Rails

Ruby on Rails developers are still in demand 15 years after the framework’s debut, and this is shown by the impressive portfolio of companies that use it. As mentioned above, companies using Rails benefit from the faster speed of delivery and an agile development approach. Some of the top companies that have used Ruby on Rails include GitHub, Airbnb, Zendesk, Shopify, Basecamp, Twitch, and Cookpad.

A current search on LinkedIn shows that in the United States alone, more than 3,400 new Ruby on Rails jobs were posted in December 2019 alone. Additionally, the impressive salaries that RoR developers take home show that knowledge of Ruby is something that companies are willing to invest in. This represents new career opportunities.

If you compare some of these figures with software developer salaries from different countries all over the world, you will see that they stack up well. Software developers in Switzerland, for instance, earn an average of $82,000, while the figures above show that Ruby on Rails developers is earning way more than that in the US and the UK.

As far as job titles go, there is a wide array of positions from which to choose. Actual job postings show wide job titles such as junior developer, senior developer, Ruby engineer, and Ruby on Rails full stack developer.

Get Your Career on Track by Learning Ruby on Rails

There are different ways to learn Ruby on Rails, and given that it’s a very beginner-friendly language, it shouldn’t take you long to become proficient. However, while you can take some free tutorials online, it’s always worthwhile to enroll in a certification course like the Full Stack Web Developer - MEAN Stack Course that enables you to gain expertise at the front and back-end JavaScript technologies of the most popular MEAN (MongoDB, Express, Angular and Node.js) Stack. Learn to create applications from the ground up and start down one of the most lucrative and fast-growing web development career paths. You will benefit from instructor support and have access to a support community of other professional programmers. If you’re dedicated, you’ll start coding and building applications by the end of the course. As with everything that involves technology, the journey doesn’t stop after your certification. Things change in the world of programming, and you should keep constantly learning to stay ahead of the curve.

After your course, it’s advisable to join forums, continue reading relevant material, and attend workshops and webinars. If you’re looking for a long-term position at a company, consider starting with an internship so that you prove yourself. If you work as a freelancer, join some platforms that will allow you to find freelance jobs. To succeed in your applications, prepare for your interviews by practicing with real-world problems. It’s also helpful to anticipate the kind of interview questions that you may be asked for prospective programming jobs. The more prepared you are, the better your chances of landing the Ruby on Rails job of your dreams.