HomeResourcesEnterpriseAI and ML Technologies: What They Mean For Federal Agencies

AI and ML Technologies: What They Mean For Federal Agencies 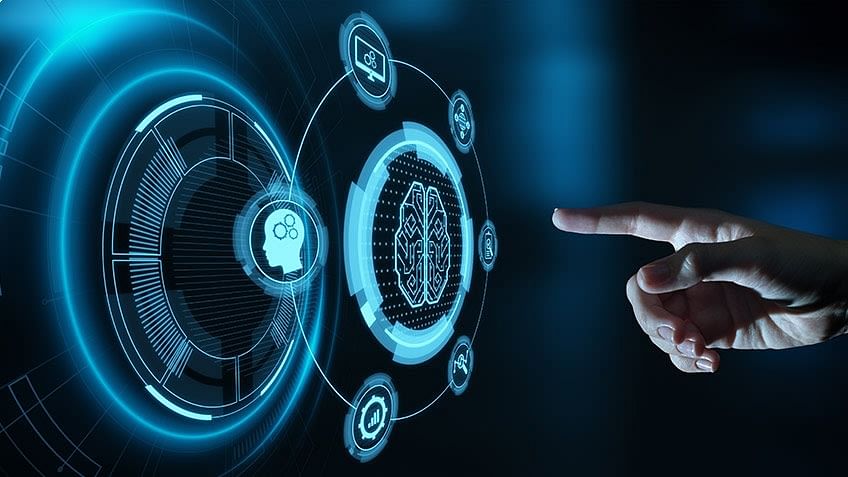 Increasingly pervasive in our lives, artificial intelligence, and machine learning (AI/ML) promise to launch a fourth industrial revolution on par with mechanization, electricity and computer technologies. Virtual assistants, autonomous driving vehicles and robot deliveries are early practical examples of how AI/ML is being put to use. Yet, we have only scratched the surface of the potential. These new tools can make connections, see relationships, surface predictions and take actions quicker than any human being. At its core, AI/ML is a predictive programming algorithm, using the known to infer the unknown. Machine Learning models are trained to use historical data to recognize patterns without additional human programming. Requiring clearly-defined inputs to produce meaningful outputs, machine learning is utterly dependent on data. First implemented in the private sector, the potential of artificial intelligence is now being realized by governments on the federal, state and local levels.

The Mandate to Modernize

The United States government only began seriously exploring AI as an emerging technology in the last few years. Evaluated for its economic impact during the Obama administration, the report to the President on IT modernization concluded: “AI raises many new policy questions, which should be continued topics for discussion and consideration by future administrations.”

The Trump administration has swiftly advanced the agenda, identifying artificial intelligence as a national priority. The Select Committee on Artificial Intelligence is encouraging adoption of the new technologies while the President’s Management Agenda amounts to the first executive mandate to federal agencies to modernize. Providing leadership, funding and data strategy, the agenda will serve as the foundation for the federal government’s harnessing of artificial intelligence and machine learning. Developed in a different era, many systems and processes within the national government have gone untouched for decades. Now, directed through law, agencies will adopt automation software in order to improve the efficiencies of government services and stay competitive on the world stage.

Data is the fuel that feeds artificial intelligence. Without data, machine learning is impossible. Thankfully, Washington excels at gathering data. Where agencies fall short is the curation, consistency, and sharing of data. The modernization agenda will directly address the access, stewardship, and use of data across agencies. New policies and best practices will emerge to ensure that the vast quantities of analytics collected by the government can be put to use to better serve the American people.

Modernizing the federal government’s technology infrastructure is among the few bipartisan issues in Washington today. Congress has successfully appropriated money to upgrade an outdated and aging network. On a global scale, the United States is in an AI arms race with several powerful competitors; it is in our national interest to pursue this course. On a more granular level, AI/ML presents opportunities for leaders to surmount operational and budgetary challenges while serving citizens more efficiently. With a well-earned reputation for wasteful spending and glacial bureaucracy, the vision for fulfilling the promise of AI is staggering. Already, agencies are transitioning from understanding the scope of the change necessary for implementing systems.

The pace of AI development is, at present, accelerating past the government’s ability to respond to the adoption of the new technologies. This leaves leaders with the need to balance innovation versus regulation. Among the first cultural shifts required will be inter-agency cooperation. Departments will have to end their siloed existences, openly sharing data that will feed the new systems. They will also need to adopt consistent data formats, ensuring the information exchanged between agencies can “talk” to one another, understood and processed across departments. Regulators will need to agree on security systems that will maintain the privacy of citizens’ data while making sure data is used in a fashion guaranteeing the American people’s civil liberties. Such a shift will require a great deal of transparency; citizens must understand what information is being collected, how it is used and the benefits achieved by collecting the information. The technical and process changes required by the government to adopt AI/ML are daunting; the continued use of it will require the trust of the people. With that trust, federal employees will be ready to begin determining how AI can help them accomplish their agencies’ missions. Experts suggest a Hippocratic Oath of sorts within government to help usher in the AI/ML revolution. Foundational elements of such an outlook might include:

While the executive mandate to modernize systems defines principles and practices to prepare for the AI revolution, it does little to address how federal employees will need to change their work patterns. To be sure, the new agenda will drastically change how government workers use systems and, in time, nearly every federal job will have a technology element to it. The benefits AI promises are boundless. Experts estimate that by automating routine tasks the government could free 1.2 billion working hours annually, saving over $41 billion in tax dollars. Yet, the potential of artificial intelligence far exceeds cost savings. The technology, when fully deployed, will help public servants make better, more informed decisions faster.

The shift in technology begs the question of whether the 2 million-strong federal workforce will still be necessary. Historically, the introduction of a new technology results in the loss of some job categories while creating many new ones. In the decades following the introduction of computers, nine in ten jobs in the clerk category disappeared. Yet, the federal workforce did not shrink. New titles sprang up even while some roles were displaced. We can expect a similar transfer in skillsets as AI/ML becomes commonplace in Washington. In fact, government leaders are preparing for the organizational shift. Because machine learning is so data-dependent, Data Science will become sought-after expertise within the federal service. This relatively new job title spanning computer science, statistics and mathematics will have a part to play in nearly every federal agency. But recruiting is only part of the challenge faced by the government as it drives the modernization agenda. Technology is changing so rapidly, the government will need to focus on evolving the existing workforce, introducing programs and training opportunities to keep skills current. This will require complete redesigns of organizational operating models and processes.

Deputy Secretary of Defense Robert Work articulated a vision for AI/ML not only for the military but for government agencies at large: “Numerous studies have made clear that the DoD must integrate artificial intelligence and machine learning more effectively across operations to maintain advantages over increasingly capable adversaries and competitors. Although we have taken tentative steps to explore the potential of artificial intelligence, big data, and deep learning, I remain convinced that we need to do much more, and move faster across DoD to take advantage of recent and future advances in these critical areas.”

The public sector has barely explored what’s possible with artificial intelligence and machine learning. Already, many agencies have achieved early successes. The National Oceanic and Atmospheric Administration (NOAA) has used data on the micro and macro scales – collecting and evaluating information from sea buoys and orbital satellites to monitor and predict damaging storms to save lives and property. The U.S. Army has implemented AI systems capable of performing such diverse tasks as detecting enemy communication signals on the battlefield and predicting when tanks will experience mechanical failures. The National Cancer Institute collects data to diagnose diseases earlier and reduce the time to bring life-saving drugs to market. AI systems within the Postal Service have helped identify handwriting and sort over 18,000 letters per hour. In short, artificial intelligence and machine learning are automating mundane human tasks, gleaning insights from vast amounts of data and positioning federal agencies to serve citizens as never before.

As governments adapt to machine learning and artificial intelligence, the potential to better serve citizens is boundless. The next generation of a civil servant will be data-savvy and tech-enabled to make smarter decisions faster.

The course certifies students as experts in the expanding field of machine learning, a form of artificial intelligence that automates data analysis to enable computers to learn and adapt through experience, performing specific tasks without explicit programming. Simplilearn’s curriculum prepares students for the role of Machine Learning Engineer and covers various machine learning concepts and techniques: supervised and unsupervised learning, mathematical and heuristic aspects, and hands-on modeling to develop algorithms.

The transition of the federal government to one utilizing artificial intelligence and machine learning principles will require disciplined change management, a long-term commitment to growing skills, the ability to ask questions and bold vision. The new workforce will need the right training and skills to ensure the government can adapt to this historic shift and do better work for our citizens. Simplilearn training courses for the government workforce are available through GSA Advantage and also at Simplilearn Government Training Programs page.