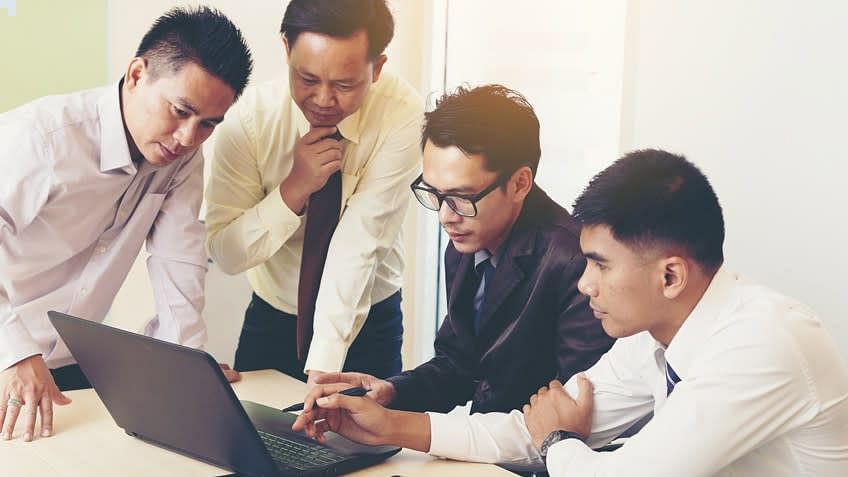 In this article, we will take a look at these important terms and formulas that are useful for earned value calculations.

Enroll in our PMP® Certification Course today and develop a strong foundation in the principles of project management.

What Is Earned Value Management?

Definition: The Earned Value Management (EVM) method integrates cost, schedule, technical scope, and risk into a project performance management methodology that assesses progress against a baseline, identifies problems, and forecasts cost (and, to some extent, schedule) at completion by utilizing that information.

To understand the concept of earned value, think about the concept of debits and credits. In a double-entry accounting system, for every debit to one account, there is a corresponding credit to another account. Earned value is similar to this concept. When you spend a dollar on labor for your project, you are “earning” a dollar’s value back into your project. Therefore, all project tasks—including code development, documentation, and other functions—earn value back into your project.

An overview of EVM was included in the first PMBOK® Guide in 1987 and expanded in subsequent editions. The construction industry was an early commercial adopter of EVM. Closer integration of EVM with the practice of project management accelerated in the 1990s.

Henceforth, Earned value Management is used to analyze the project performance, calculate the variance for schedule and cost and indicates where the project stands in comparison to the estimates calculated earlier for this point in time.

BAC is the sum of all budgets established for the work to be performed. It indicates how much was initially planned for the project to cost. No single formula exists. BAC is derived by looking at the total budgeted cost of the project.

The earned value management indicates how much work was completed during a given period. It is the budget associated with the authorized work that has been completed. It is derived by measuring actual work completed at a point in the schedule.

The actual cost is the realized cost incurred for the work performed on an activity during a specific time period. It indicates the money spent during a given period of time.

Cost Performance Index is the rate at which the project performance is meeting cost expectations during a given period of time. It is expressed as a ratio of the earned value to the actual cost.

Schedule Performance Index is the rate at which the project performance is meeting schedule expectations up to a point in time. It is expressed as a ratio of earned value to planned value.

The estimate to complete is the expected cost to finish all the remaining work. It projects how much more will be spent on the project, based on past performance.

To complete performance index describes the performance that must be achieved to meet the financial or schedule goals. It is expressed as a ratio of the cost to finish the outstanding work to the budget available.

Are you a professional who is aspiring to be a project manager? Try answering this PMP® Practice Test Questions and assess yourself.