Top Business and IT Certification Courses for 2022 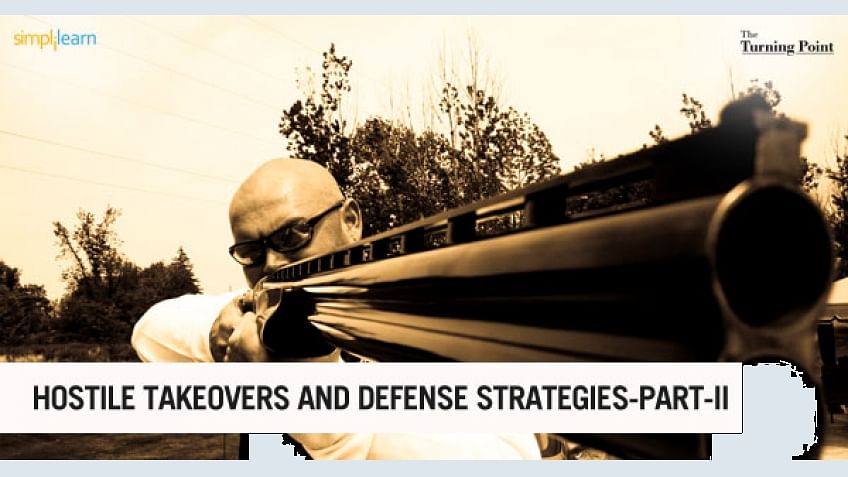 In this article, we will continue discussing the remaining strategies for defense against hostile takeover.

This refers to the olden days when agents were instructed to swallow a cyanide pill instead of being captured or, in this case, overtaken. When it comes to the corporate world, the effect of the pill is similar.

Poison pills usually refer to issuing preferred stocks (pills) below market value, making it unfeasible (poison) for a potential acquirer to purchase sufficient stocks to become a majority shareholder. Technically, the preferred stock is the “rights” to purchase additional shares at a given price attached to each share of stock.

The issue of poison pills, or the right issue at cheaper price, happens with a triggering event e.g acquirer gains more than 20% of the firm's shares without the board's approval or a tender offer for 30% or more of the target firm’s outstanding stock. The key is that the ‘rights’ are cancelled for any stakeholders who trigger exercisability i.e. the acquirer who fails to gain approval of the board triggering dilution. In layman terms (e.g., newspapers), the term “poison pill” is often used more loosely, to indicate something that makes a takeover more difficult.

Another form of poison pill is Poison puts. Poison puts is a bond that have a covenant attached to it, which gives the bond holders a right to ‘put back’ the bond, in case of certain events like merger or acquisition.

Using such rights is advantageous in defending a target because of its negative impact on a balance sheet which comes from the raise in debt to the shareholders as an effect of the rights. Increasing the debt means to raise the risk of the company’s financial leverage and is thus seen as very unattractive for the acquirer who has to inherit these debts. One major drawback regarding the Poison puts pill is that its actions are only made accessible when the company is acquired 100 per cent.

A golden parachute is a clause in a CEO's contract and other management executives of a company, that will provide them with money or stock options, in the event that the company is being acquired and executives might be subjected to termination by the acquiring the firm.

This clause in payment is designed to counter the hostile takeover, by making it more expensive, as it involves paying more than what is usually a lump sum payment to such executives of the target company.

The strategy is usually implemented along with other takeover defense strategies. The Golden parachute’s primary function in a hostile takeover is to align incentives between shareholders and the executives of the target company, as generally there are concerns about executives who face a hostile takeover while risking loss of their jobs, since they oppose the bid even when it increases the value for shareholders.

By using the Crown Jewel strategy, the target company gets the right to sell the company’s most valuable assets (Crown Jewels) - all or only a few, when it faces a hostile bid. This is done by the target company, in hope that selling such assets will make them less attractive to the possible acquirers and may ultimately force a drawback of the bid.

Another way of implementing this type of strategy, by the target company, is to sell its Crown Jewels to another friendly company (White Knight) and later on, when and if the acquiring company withdraws its offer, buy back the assets sold to the White Knight at a fixed price agreed in advance.

The term is derived from the fact that Lobster traps are designed to catch large lobsters but allow small lobsters to escape. A lobster trap is an anti-takeover strategy used by target firms. In a lobster trap, the target firm issues a charter that prevents individuals with more than 10% ownership of convertible securities (including convertible bonds, convertible preferred stock, and warrants) from transferring these securities to voting stock. This is a prevention measure that makes sure large stakeholders cannot add to their voting stock and thus reduces facilitating the takeover of the target company.

Selection of the defense system against a hostile takeover is a strategical decision. Careful preparation is necessary to cut off such unfriendly bids. It is also important to remain ﬂexible in responding to changing dynamics of takeover techniques. Also, there is no “One size ﬁts all” strategy to make the company full-proof against such hostile bids. Therefore, a regular review of the takeover environment and events is essential bring make defense strategies up to date.

Manish is a PMP certified professional with more than 7 years of IT industry experience in various technical and cross functional roles. He holds an M.B.A (International Business and Finance) and B.E. (Hon’s in Electronics and Communication Engineering) degrees.