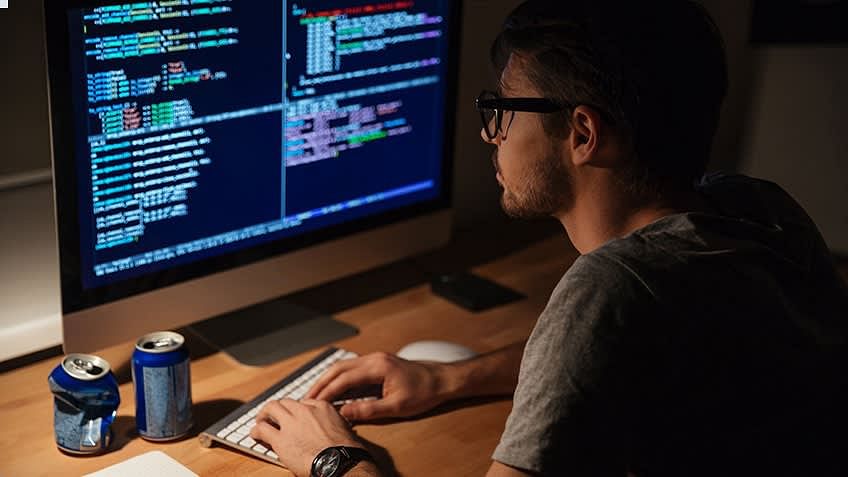 As with so many technologies, Node.js has its champions and its detractors. But there’s no denying that it is widely used by some powerhouse websites, including Uber, LinkedIn, and PayPal—which makes it a powerhouse no matter which side of the debate you’re on. And popular technologies used by big brands are always something to pay attention to when you’re making career choices.

So what is Node.js? Node.js is an open source cross-platform runtime environment written in JavaScript. It is built on Chrome’s V8 JavaScript engine, which parses and executes the JavaScript code. Node uses an event-driven, non-blocking I/O model, which makes it fast and lightweight. This programming model is one of the main reasons why Node has become so popular.

Node is best suited for building software and applications that require real-time, synchronous interactions such as chat apps and websites. Yet it also has other uses and benefits which make it popular among developers, as well, all contributing to its popularity.

Learn From The Best Mentors in the Industry!

If you are interested in front-end or back-end programming, you should consider learning Node.js. Here are five good reasons why:

Node is written in JavaScript. JavaScript is one of the most popular programming languages and nearly every developer is familiar with it. Therefore, learning Node requires less effort and time, even for a junior JavaScript programmer.

The demand for full stack developers is high and we’re seeing more and more job openings requiring Node proficiency. That means adding Node.js to your resume is a good way to expand your career opportunities as a stack developer. Plus the pay is great: The average Node.js developer salary averages $100,000 per year.

Unlike Ruby on Rails, which imposes guidelines and rules for developing software, Node allows much more leeway in building apps. A fresh install of Node only gives you the bare minimum, allowing you to build everything from scratch with minimal restrictions.

Node.js is an open source framework with a very active and vibrant community comprised of developers who continuously contribute to its improvement. That makes learning easier because you have access to numerous solutions at every stage of development.

Prepare Yourself to Answer All Questions!

How to Start Learning Node.js

If you think learning Node.js might be your next step in advancing your career, you’ll find advice for getting started below.

Node is written in JavaScript, so you should start by learning JavaScript. This means understanding scopes, functions, closures, module patterns, classes, promises, and callbacks, as well as the capabilities of Strings, Numbers, Arrays, Objects, Sets, and Maps.

2. Understand Why It Is Called Node

When you know why it is called Node, you’ll better understand how it works. It’s called Node because it is used to build simple single-process blocks called nodes. These nodes can be organized with good networking protocols for communication with each other and be scaled up to build large distributed programs.

This is the main feature of Node. You need to understand how I/O operations in Node are performed asynchronously, with the lines of code adhering to a non blocking pattern

4. Learn the Concept of the Event Loop

Basically, there is a stack, a heap, and a queue. In a loop, the queue is polled for the next message and when a message is encountered, the callback for that message is executed. For more on this process and an illustration of the loop, check out this explanation from the Carbon Five blog.

To see all the options, type global in a Node REPL (read-eval-print-loop) and type global. You will see JavaScript, Node library functions, and Node global objects. Learn the various tasks that you can use them for.

6. Learn How to Use the Libraries That Come With Node

You can use the libraries to figure out how to run a tcp server and program sockets using “net,” how to read/write files with “fs,” or how to run a streaming-ready web server with “http” among many more tasks.

Read and try to understand some of the codes on a framework like “Express.” Reading in a group makes it even easier.

8. Without Using Any Frameworks, Write a Web Application on Node

Handle as many cases as you can until you are comfortable using Node.

Check out the video below to have a clear understanding of NodeJS and why it is popularly used.

The ideas above are only to get you started. When learning Node, you need to be programming 90 percent of the time. You’ll obviously need more education than what we’ve listed above to accomplish that. But there are several useful resources you can use to learn Node.js and spend more time programming, including:

For a beginner who wants to get started in the tech industry, learning Node.js and getting relevant certifications can be an effective way to get your career launched. Use the advice above to start your journey, and soon you’ll be proficient in this popular (and profitable) runtime environment.