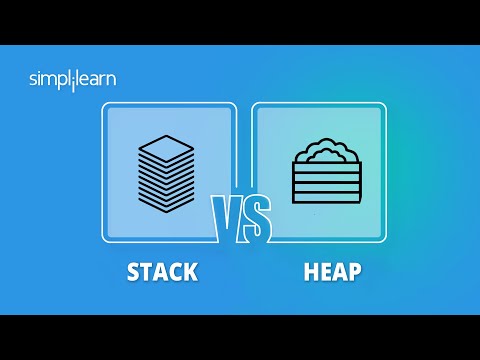 Memory is a crucial resource while developing any software or application. Depending on the preconditions of the hardware, the input flow is designed in each software development strategy. On many occasions, developers manage memory manually by using optimal data structure formats. That is why understanding all implications about memory is essential. So, in this tutorial, you will deal with Stack vs Heap memory allocation in C and C++.

How Does a Program Work?

The C and C++ program files are stored with .c and .cpp extension. These extensions are required for the compiler to recognize that the file is a C/C++ program. When you run a C program, the linker initially connects the program to all included header files. Following that, the loader is put to work. The loader will load the .exe file into RAM and notify the CPU of the starting address at which this program is loaded. This executable file is also known as machine-level code, and it consists of numbers 0 and 1.

The executable file holds all the instructions that are required to execute the program. The program counter takes over all those instructions and allocates memory to all the variables, functions, parameters, and return calls. By utilizing the memory, the program counter generates the output of a program. The image given below represents the different segments of memory area used in program execution.

This type of memory allocation is also known as temporary memory allocation. The stack memory area stores local variables, arguments passed through a function, and their return addresses. After the function completes its execution, all of the data belonging to that function is immediately flushed off the stack. This means that any value saved in the stack memory scheme is available as long as the procedure hasn't completed its execution and is still in a running state.

The simulation given below explains the scenario of stack overflow error in a program shown above.

Heaps memory is allocated during the execution of programmers' instructions. It is crucial to highlight that the name heap has nothing to do with the heap data structure. It is termed a heap because it is a collection of memory space that programmers can allocate and deallocate.

When you construct an object, it is always in Heap-space, and the referencing information for these objects is always saved in Stack-memory. Because the data stored in this region is available or visible to all threads, heap memory allocation is not as safe as stack memory allocation. A memory leak in the application can occur if the programmer does not handle this memory well.

The image given below explains how memory allocation is achieved with the help of the malloc() function.

This allocated memory will further be accessed using pointer variable as shown below:

In the case of heap memory allocation, the programmer is solely responsible for de-allocating the memory space. Two scenarios mentioned below can lead to heap overflow error:

The tabular representation is given below lists key differences between Stack and Heap.

If you are seeking for more comprehensive learning which goes beyond data structures and encompasses the fundamentals of interactive application development, Simplilearn’s Full Stack Java Developer Master’s program will be precisely suited to you. The courses in the above catalogue can build your chances of getting into a software developer role by assisting you in mastering the craft of software development. So, explore now and get started!

Have any questions about this tutorial on the Stack vs Heap Memory Allocation? If yes, please leave them in the comments section at the bottom of this page; we will respond to them soon!