Lesson 2 of 9By Taha Sufiyan 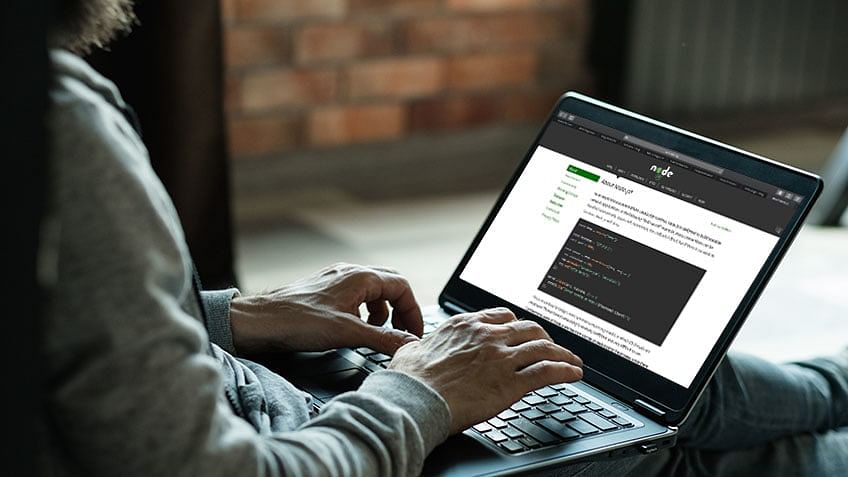 If we talk about any application then the part with which the user is interacting is basically the frontend of our website whereas there are many things which happen in the background or in the backend of our website. Basically there are three parts of any application, one is Frontend with which the users are interacting, then comes to the backend server and backend database. For backend servers we can use NodeJS, Java, Python, etc. and for backend databases we use relational or non-relational databases.

Now let us first know what NodeJS is.

For running our web applications outside the client’s browser , NodeJS is basically used as an open-source and cross platform JavaScript runtime environment.For running the server side applications we use this.For building the I/O intensive applications like video streaming sites ,online chatting applications and many other applications , it is used. Many established tech giant companies and newly created start-ups are using NodeJs framework in their company.

In 2009, NodeJs was developed by a guy called Ryan Dahla and the current version of NodeJs is v16.9.0.

Node.js is an open-source, cross-platform JavaScript runtime environment and library for running web applications outside the client's browser. Ryan Dahl developed it in 2009, and its latest iteration, version 15.14, was released in April 2021. Developers use Node.js to create server-side web applications, and it is perfect for data-intensive applications since it uses an asynchronous, event-driven model.

Now that we know what is Node, let's look at why it is so prevalent in web development.

Why Do We Use NodeJs?

There are many reasons for which we prefer using NodeJs for the server side of our application, some of them are discussed in the following:

Now let us discuss on some of the features of NodeJs:

Now that we established what is Node, let’s dig into its architecture. Node.js operates on a single-thread, allowing it to handle thousands of simultaneous event loops. Here’s a diagram, provided by Sinform.com, that best illustrates Node.js architecture.

Now, let's go through each part of Node.js to get a better understanding of the server-side platform as a whole.

The console is a module that provides a method for debugging that is similar to the basic JavaScript console provided by internet browsers. It prints messages to stdout and stderr.

Node.js is built-on on the concept of single-threaded programming. Cluster is a module that allows multi-threading by creating child processes that share the same server port and run simultaneously.

A cluster can be added to an application in the following way:

Errors in Node.js are handled through exceptions. For example, let's handle the error that would occur when we divide a number by zero. This error would crash the Node.js application, so we should handle this error to continue with the normal execution of the application.

Streams are the objects that let you read data or write data continuously. There are four types of streams:

Buffer is a module that allows the handling of streams that contain only binary data. An empty buffer of length '10' can be created by this method:

The domain module intercepts errors that remain unhandled. Two methods are used for intercepting these errors:

DNS module is used to connect to a DNS server and perform name resolution by using the following method:

DNS module is also used for performing name resolution without a network communication by using the following method:

Node.js includes a debugging utility that can be accessed by a built-in debugging client. Node.js debugger is not feature-packed but supports the simple inspection of code. The debugger can be used in the terminal by using the 'inspect' keyword before the name of the JavaScript file. In order to inspect a file—myscript.js, for example—you can follow this method:

Now that we are familiar with the main parts of Node.js let's go ahead and learn about the Node.js Express framework.

Express is a flexible Node.js web application framework that provides a wide set of features to develop both web and mobile applications. It's a layer built on the top of the Node.js that helps manage a server and routes.

Now look at some of the core features of the Express framework:

Now look at an example of a simple "Hello World" program developed using the Express framework to gain a better understanding of this framework.

Having learned about the Express framework, let's now move on to the use cases of Node.js.

Netflix, the world's leading online entertainment network with more than 167 million users, is one of many top companies trusting Node.js for their servers. The reasons why the company chose to use Node.js include:

Walmart is the world's largest company by revenue, with US$ 559 billion in 2020, according to Forbes. Walmart chose Node.js because of the following attributes:

Uber is a U.S.-based, multinational ride-hailing company offering services that include peer-to-peer ridesharing, ride service hailing, and food delivery. The reasons why the company chose to use Node.js include:

NASA, an independent agency of the United States Federal Government, is responsible for the civilian space program, as well as aerospace and aeronautics research. NASA chose to use Node.js for the following reasons:

PayPal is a U.S.-based company operating a global online payment system that supports online money transfers, that is serving as an electronic alternative to traditional paper methods like checks and money orders. PayPal chose to use Node.js for the following reasons:

Medium is a popular online publishing platform developed by Evan Williams and launched in August 2012. The reasons why the company chose to use Node.js include the following:

NPM is a popular Node.js package library and the jewel in the crown of the Node.js community. It has millions of downloadable libraries, organized according to specific requirements, and is the largest software registry in the world. NPM is free. These libraries are growing fast to this very day, and they strengthen the Node.js community.

When Can We Use NodeJS?

When very few CPU cycles are used by the server side code. When the non-blocking operations are done by us and that does not have heavy jobs or heavy algorithms that consume a lot of CPU cycles.

If we are already from JavaScript background and we are very comfortable in writing single threaded code just like client side JavaScript.

Now let us know when not to use NodeJs:

Using a single CPU, an event based non blocking I/O model is leveraged by NodeJS and for that reason the incoming request will be actually blocked by all the intense CPU processing activity.

Let us now go through the installation procedure of NodeJs.

So for the installation of NodeJs, we need to follow a very straightforward process. This can be done by the installer package available at the official website of NodeJs.

So far, we have got a good idea on NodeJs and when we have realized we should use it for our server side application.

Understanding the Popularity of Node.js

Node.js has attracted the attention of businesses and organizations from all sectors. This is hardly a surprise, considering its versatility and strong community support. As you can see from the earlier-mentioned use cases, there are some pretty big players that use Node.js, organizations and businesses like NASA, Uber, PayPal, and Netflix.

Check out the industry trends below to get more insights into Node.js’s popularity.

With adopters such as Netflix, Paypal, and other tech companies, Node.js has seen an exponential increase in its use in web development.

Node.js also owes some of its popularity to its JavaScript association. Since JavaScript is the most popular language, as evident from the Stack Overflow survey in 2020, many developers can start working on the Node.js library without steep learning.

If you are looking to enhance your development skills further, we would recommend you check Simplilearn’s Post Graduate Program in Full Stack Web Development. This course can help you hone the relevant skills and make you job-ready.

If you have any questions or queries, feel free to get in touch with us in the comments section below. Our team will get back to you at the earliest.