Lesson 5 of 9By Baivab Kumar Jena 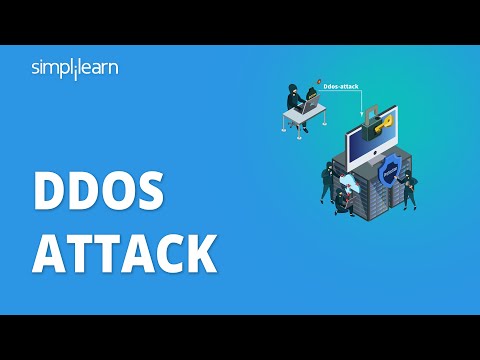 With work from home being the norm in today’s era, people spend considerable time on the internet, often without specific measures to ensure a secure session. Apart from individuals, organizations worldwide that host data and conduct business over the internet are always at the risk of a DDoS attack.

Now, begin by learning about what is a DDoS attack.

What Is a DDoS Attack?

To understand how a DDoS attack works, you must know what a denial of service attack or a DOS attack is.

In a DOS attack, the hacker seeks to make the resources of a particular server, database, or router inaccessible to its users. This can be done by clogging the available bandwidth of the target, be it via continuous web requests or indefinite ping commands. Analogous to how blocking a shop’s door prevent potential clients from entering it, DOS attacks were complete distress in the early days of network security.

The term DDoS is an acronym for ‘distributed denial of service’. Instead of a single device attacking a single server, DDoS attacks have multiple systems attacking a target, identifying the original hacker. With all the devices trying to access the resources of a server, legitimate users are unable to access them, which causes a server outage of sorts.

How Does a DDoS Attack Work?

A DDoS attack is a two-phase process.

Phase 1: The hacker creates a botnet of devices. Simply put, a vast network of computers is hacked via malware, ransomware, or simple social engineering. These devices are a part of a botnet network, which can be triggered anytime to start bombarding a system or a server on the instruction of the hacker that created the botnet. The devices in this network are called bots or zombies.

Phase 2: When the hacker finds the right time to attack, all the zombies in the botnet network send requests to the target, taking up all the server’s available bandwidth. These can be simple ping requests or complex attacks like SYN flooding and UDP Flooding.

You now have a general idea about how DDoS attacks work. Now, learn a little more about the various types of DDoS attacks.

To better understand why DDoS attacks are so commonplace in today’s day and age, take a look at some of the aims a DDoS attack may have had when being launched.

Now that you have a good understanding of the aim and working of DDoS attacks, you will learn some ways you can protect yourself from such attacks.

In the final topic of this lesson on what is a DDoS attack, you will see a live demo where a Linux system is breached with a DOS attack.

You have two virtual machine instances in this demo. One of them is Parrot Security, which a hacker generally uses to launch certain attacks like DDoS on specific targets. The second virtual machine is a standard Linux distribution that acts as our target system. The majority, if not all, servers worldwide use Linux as a backend, thanks to its stability and low resource consumption.

1. You have to set up a Wireshark program on our target system, which helps analyze the network traffic being sent and received from the instance.

2. To attack the target, you need to get its IP address, which acts as an identifier for the system. You can find the local IP address by using the command “ifconfig”.

3. To launch the attack, we will need a program called Hping3. It is a command-line tool that acts as a packet generator and analyzer for the TCP/IP protocol. You will use the IP address detected in the previous image to start the attack. The command to be given using hping3 is:

4. Once this command is run, you can watch the Wireshark window on our target system and watch a flurry of requests being sent from a single IP address. After a few seconds, the system becomes completely unresponsive due to the lack of processing power in handling so many requests simultaneously.

What you just launched was a DoS attack or a simple denial of service attack. Attacks of such small magnitude are not able to break down the behemoth servers for multinational corporations. When multiple systems start doing the same thing to more extensive and robust systems, they eventually succumb to the attack unless urgent measures are taken. Since more than a single system disrupts communication, it’s termed DDoS, or distributed denial of service.

With this, you have reached the end of the tutorial on what is a DDoS attack.

DDoS attacks have been relatively commonplace in the last few years, thanks to easy access to rented botnets and an increasing reliance on the internet. However, multiple other attacks can target a system and cause irreparable damage to an organization’s data and reputation.

To help combat this, Simplilearn offers a "Cybersecurity Expert" course that teaches beginner and advanced cybersecurity analysts the techniques needed to safeguard data. The modules cover a large array of topics, starting from cryptography to brute force attacks, thereby giving a complete overview of the requirements of an industry that needs trained personnel now more than ever.

In today’s lesson on what is a DDoS attack, you learned about its working, the possible aims, and prevention methods for a DDoS attack. You also learn about the various categories of DDoS attacks and how they can affect a single system using the live demo.

If you have any doubts regarding the lesson, please let us know in the comments, and we will have experts answer them for you as soon as possible.