Lesson 51 of 60By Anubhav Sharma 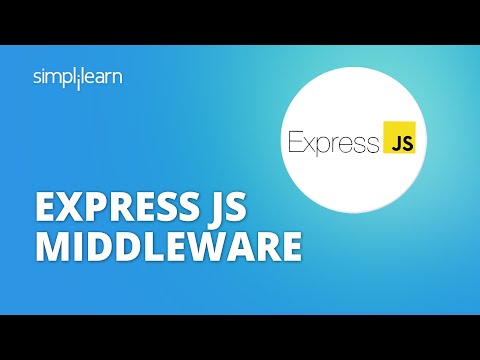 Express is a node js web application framework that provides broad features for building web and mobile applications. It is used to build a single page, multipage, and hybrid web application.

We use these functions to modify our middleware to perform many tasks. If we want to block our site for some country or if we're going to check the authentication of a user etc., we use middleware for that.

So to create middleware, we need to install all the packages to run express middleware.

This article has touched on what is middleware, the functions of middleware, and we have created a simple middleware using Express js. You can enroll in Simplilearn’s Node JS certification training to learn more about Express. This certification training course will upskill you on how to use Express.js, NPM, NPM Vet, REST, shrink-wrap, Express.js with MongoDB, and SQLite CRUD operations. This Express JS training focuses on the fundamental ideas of Node JS and Express Js and gives you hands-on experience developing an HTTP server.

If you have any questions or feedback, do let us know in the comments section of the “Express js Middleware” tutorial, and our experts will get back to you at the earliest.

Anubhav is a Research Analyst. He enjoys working on dynamic projects where he can learn new things. He is responsible and diligent. Being a resident of Jammu, he loves nature and exploring new places.