Lesson 3 of 5By Harsh Bhardwaj 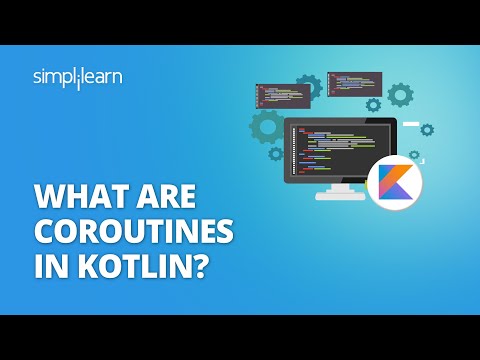 When dealing with complex applications, the single path pattern of execution doesn’t help that much. In order to deal with complex applications, you have to implement a concurrency pattern of execution so that the code doesn’t block. The Kotlin coroutine is used to write concurrent and asynchronous programs. In this tutorial, you will learn all about Kotlin coroutines.

Why Do You Need Coroutines?

In today’s world, nobody wants to wait for anything; all of us want to get a quick result out of anything as soon as possible, which is not feasible in many cases. Similarly, an application runs various tasks and operations, and the operating time for each task is different from others. As a result, sometimes, some tasks require quite a long time while others keep on waiting for their turn. While doing these time-consuming tasks, you need to ensure the user experience isn't degraded.

Asynchronous programming is used to provide a smooth flowing experience for the client-side and server-side. Now asynchronous means it can execute simultaneously multiple tasks, and other tasks don't need to wait for another task. It is easy to write the asynchronous code in Coroutines and it makes it more easy and readable by eliminating the requirement of callback pattern.

Now, you will learn about threads.

Before understanding coroutines, you have to understand threads. So you will start with programs; the programs are a set of instructions. Whenever a program runs, it creates a process that contains memory, process id, etc. In that process, some threads are used to execute the information.

Every process has at least one thread. These threads help with high-performance applications, and they work in sequential order one after the other.

Whenever a thread gets stuck while running an instruction, then the other thread executes the rest of the instructions.

What Are Kotlin Coroutines?

Coroutine stands for cooperating functions; it is derived from two words - co and routine. The word co stands for cooperation, and routine stands for functions. A coroutine is a feature of Kotlin; it can do all the things that a thread can and is also very efficient. They are lightweight threads that help to write simplified asynchronous code that keeps the application responsive while maintaining heavy tasks like network calls and avoiding tasks from blocking.

Coroutines are executed inside the thread and are also suspendable. Here suspendable means that you can execute some instructions, then stop the coroutine in between the execution and continue when you wish to. Coroutines can also switch between the threads, which gives coroutines an edge over threads.

So as you have understood Kotlin coroutines, now look at some coroutines' features.

Now, go ahead and understand the example of the Kotlin coroutine.

You will see some terms related to coroutines and then have a look at an example.

Now you will understand some basics of Kotlin Coroutines.

Some basics of coroutine include:

Do you have any questions regarding this tutorial on Kotlin coroutines? If you do, then put them in the comments section. We’ll help you solve your queries. To learn more about Kotlin, click on the following link: