What is Kotlin? Guide to Kotlin Programming Language

Lesson 1 of 5By Kartik Menon 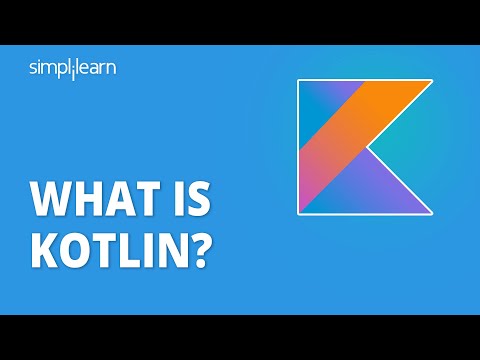 Kotlin is an open-source programming language developed by JetBrains. Google also crowned Kotlin as the standard IDE for android development. In this tutorial on What is Kotlin, you will learn about Kotlin in detail.

Why Do You Learn the Kotlin Language?

Kotlin is one of the fastest-growing and widely used programming languages. Kotlin brings together the best object-oriented and functional programming features. Software developers across the globe prefer the Kotlin language for various projects. It is a very easy and friendly language as well. It is quite easy to maintain and debug this language, so it is a good language to start with.

Google announced Kotlin language as an official language for developing android applications in May 2017. After the announcement, the jobs for Kotlin increased in large numbers; since then, the job opportunities for Kotlin have doubled every three months as per Dice. The demand for Kotlin is on the rise. Google, Netflix, Pinterest are some of the companies using Kotlin.

Kotlin is a general-purpose, statically typed programming language developed by Jet Brains. It has both the features of object-oriented programming and functional programming. Kotlin is interoperable with Java which means both languages can share and use the information. Like the java compiler, the Kotlin compiler also generates the byte code, which can run on JVM.

Kotlin is widely used to develop server-side applications, android applications, multiplatform mobile development, and much more. It is a kind of Java with some added features; even the java libraries can also be used in the Kotlin project. Although Java is a really cool language, the developers of Kotlin focused more on simplifying the code and increasing transparency.

Now moving on to features of Kotlin.

There are numerous features of the Kotlin language, some of them are as follows:

Now, look at the top Companies using the Kotlin language.

So these were some Companies using the Kotin language.

Do you have any questions regarding this tutorial on what is Kotlin? If you do, then put them in the comments section. We’ll help you solve your queries. To learn more about Kotlin, click on the following link: What is Kotlin?