Kotlin Vs Flutter: The Best Guide To Choose Between Them

Lesson 2 of 5By Simplilearn 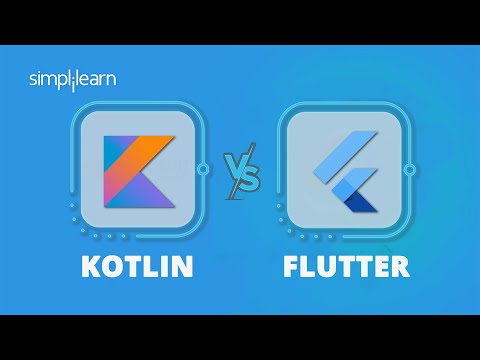 The market is becoming more and more focused on using mobile applications to run a business. It has become one of the most fundamental parts of all businesses. Kotlin language and Flutter SDK are widely used for mobile app development purposes, and they are very well suited for developing high-performance applications. In this tutorial on Kotlin vs. Flutter, you will learn about Kotlin and Flutter and compare them.

Kotlin is a general-purpose statically typed programming language developed by Jet brains that first appeared in 2011 and was released in 2016. It can support the object-oriented and procedural programming paradigm. The word statically typed means the type checking, and the type of the variable is known at the compile time.

Kotlin is interoperable with Java, which means both languages can share and use the information, in other words, you can use Kotlin side by side with Java. Just like the compiler of Java, the Kotlin compiler also generates the byte code, which can run on JVM. Kotlin is developed by selecting all the good features of different languages like Java, JavaScript, Scala, C#, etc., which is why it is a friendly and easy language to learn.

So now that you learned about Kotlin, move on and understand what Flutter is.

Flutter is a user interface toolkit that Google developed in 2017. It is an open-source framework and offers a complete package of widgets, tools, etc., for development purposes. It is used to develop mobile applications, web applications, desktop applications, and some embedded devices as well.

Flutter is not a language but a development kit that contains all the necessary libraries, tools, documentation, etc., to build the software. Dart is the programming language that is used in Flutter. Dart was developed by Google in 2011 and is very suitable for mobile and web applications.

Now, go ahead and compare both Kotlin and Flutter in terms of different aspects.

So you will first start with Performance.

Moving on to the advantages of Kotlin.

Also, Koltin has a single codebase that makes it a stable language for development, and you can easily detect errors before running the code.

In this tutorial on Kotlin vs Flutter, you learned many things, including what exactly is Kotlin and Flutter.  You compared them in terms of performance, ease of learning, popularity, integration of third-party libraries, and the apps developed by them. Then, you also learned about the advantages of Kotlin language and Flutter (SDK).