HomeResourcesCyber SecurityWhat is End-to-End Encryption? How It Works, and Why We Need It

What is End-to-End Encryption? How It Works, and Why We Need It 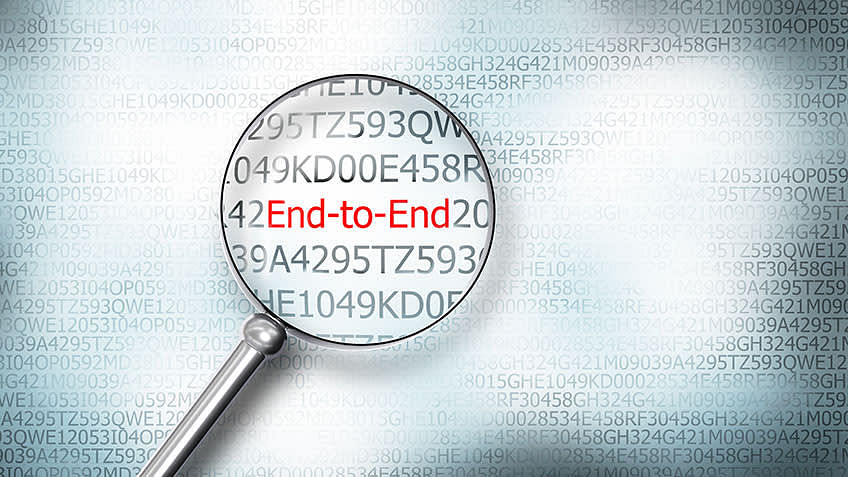 Today's world relies on the Internet for a significant amount of its communications, so security is a big concern. Grab a newspaper or click a news story link, and you'll inevitably read of yet another security breach or hacking attempt. Of course, online communication and data exchange comes with risks, but the technology's speed and convenience make it worthwhile.

Well, as it turns out, there is. As a result, organizations, businesses, and individuals alike turn to one of the many sorts of cryptography available to send secure data. For instance, there is the end-to-end encrypted data method designed to increase security and lower risk. So, today we will explore end-to-end encryption, including what it means, how it works, its advantages, and why data is more secure when it's encrypted end to end.

Let’s begin with a definition.

What Is End-To-End Encryption?

End-to-end encryption, or E2EE for short, is a secure communication method that encrypts data transferred from one end device or system to another while preventing third parties from accessing the data.

Other than the sender and the receiver, no one can access information in an end-to-end encryption system. Instead, data gets encrypted at the device level, meaning files and messages are encrypted before sending and get decrypted only after they arrive at their destination.

When parties use end-to-end encryption to send an email or data to someone, no one sees your message's content, including the government, hackers, or even the Internet Service Provider (ISP), or applications provider.

To sum it up, end-to-end encryption is an encryption system that stands out from other encryption systems because only the sender and the receiver, otherwise known as the endpoints, can decrypt and read the information.

How Does End-To-End Encryption Work?

End-to-end encryption’s fundamental element is the creation of a public-private pair of keys. This method, also called asymmetric cryptography, uses separate cryptographic keys to secure and decrypt the data.

Public keys are widely distributed and used to encrypt or lock the message. Everyone in the network (e.g., a corporation's email system) can access the public key. Users encrypt their transmission using the public key and send it to the user who also has that public key. The information, however, can only get decrypted with the correct private key, also called the decryption key.

However, private keys are only known by the respective owner at each end (the senders and receivers) and are used to decrypt or unlock the information. Let's look at an example and how this all comes together.

End-to-end encryption is the virtual equivalent of locking your data in an impregnable safe and sending it to the only person who knows the combination. This level of security makes end-to-end encryption an extremely valuable and essential part of doing business in the 21st century.

End-to-end encryption is essential because it offers users and receivers the necessary security for their message and data from the moment the user sends the information until the instant the recipient gets it. In the process, it also guarantees that no unauthorized user can read the data.

For example, services like Gmail, Google, or Microsoft give providers copies of the decryption keys, allowing them access to users’ content on its servers, enabling the providers to read users’ email and files. In Google’s case, for example, this possession of decryption keys has allowed them in the past to target advertisements to the Google account holder. Have you ever wondered why you get ads online that seem to be a bit too on the nose? Accessing user files and emails accounts for some of that. But frankly, it’s a bit creepy.

However, this can’t happen on a well-constructed end-to-end encrypted system because the encryption system doesn’t allow providers access to the decryption keys. So, for people who value their privacy (and are sick of getting flooded with online ads!), end-to-end encryption is an absolute must!

End-to-end encryption also defends against fraud, specifically message tampering. Hackers and other cybercriminals often attempt to change information either out of pure malice or commit fraud. Since there is no way to predictably change an E2EE encrypted message, the tampering effort would stick out like a sore thumb, alerting users that the data is compromised.

What Are the Advantages of End-To-End Encryption?

Here’s a bulleted summary of the plusses of end-to-end encryption. Some of these points have already been covered.

What Can’t End-To-End Encryption Do?

End-to-end encryption is a fantastic tool, but it can’t do everything. Here’s a list of things E2EE can’t help with.

Have You Ever Considered a Career in Cyber Security?

More businesses and organizations than ever are concerned about cyber security. Consequently, there is a greater demand for cyber security experts. A career in cyber security gives you the feeling of doing something meaningful while providing significant challenges and rewards.

If you’re considering a cybersecurity career, Simplilearn has everything you need to get you going. Our Post Graduate Program in Cyber Security course gives you the skills and training you need to become an expert in the rapidly-growing field of cyber security. Perhaps you’re already enjoying a cybersecurity-related career but are looking for a means of advancement, climbing the career ladder.

This program offers you comprehensive approaches to protecting infrastructure and securing data, featuring techniques like cloud-based security, risk analysis and mitigation, and compliance. Additionally, you will acquire a valuable and timely set of skills, taking you from a foundational skill level to an advanced level through industry-leading cyber security certification courses.

Simplilearn has a vast selection of cyber security courses that are well-suited for upskilling in your present position or providing you with game-changing skills that can help you pursue a career in cyber security.

Don’t delay! Visit Simplilearn today and change the future of your IT career for the better!