HomeResourcesDigital MarketingPenguin 4.0 Update: The Best Advice From Experts You're Not Taking

What Is the Importance of a Digital Marketing Certificate?

How to Make Money With Pay-Per-Click (PPC) Advertising?

8 Benefits of Branding that You Must Know About

Penguin 4.0 Update: The Best Advice From Experts You're Not Taking 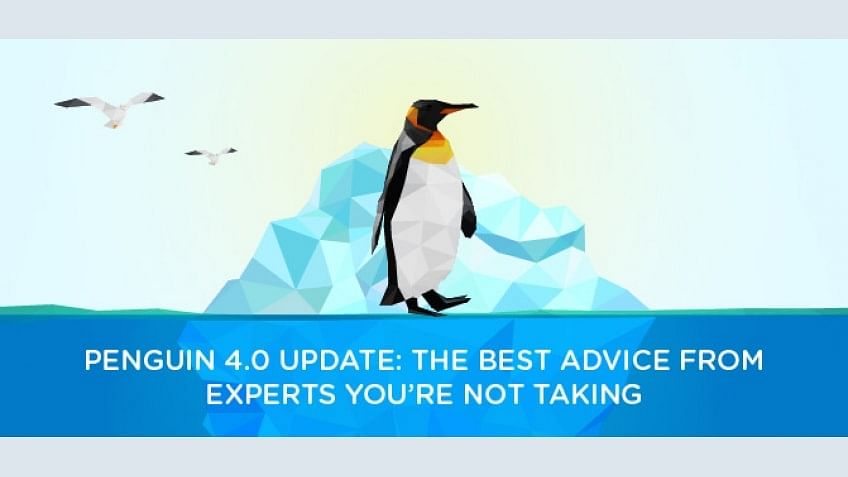 Google rolled out the first ever Penguin Update on April 24, 2012. The update’s main focus was to penalize websites that tried to rank high on Google search engine rankings by violating Google’s Webmaster Guidelines, mainly through “unnaturally acquiring” links.

In essence, Google would apply a negative value to specific links that it deemed unworthy and this would result in lowering your rankings if you used these links on your website.

More specifically, some of these unnaturally acquired links include:

Consequently, when in early January extreme google fluctuations were experienced as witnessed by Search engine RoundTable, everybody started guessing that it might actually be the long-awaited Penguin 4.0 update.

Below is a look at what the experts have to say so far about Penguin 4.0 and the most recent updates in Google search.

1. What’s all the current hullabaloo about Penguin 4.0? Why everybody suspects it’s Penguin 4.0

On January the 9th 2016, as fresh news kept filtering in, Dan Petrovic, the managing director of DEJAN, Australia’s top name in SEO quite convincingly concluded that he had noticed Penguin-like behavior. In an article titled “Today is the Biggest Google Update Since June 2015”, he cited tweets from several Webmasters and research from Algoroo that pointed towards the long-awaited Penguin update.

“Upon investigating some of the newcomers in Google’s search results there is evidence that extreme anchor text manipulation got rewarded in this round. Historically, this doesn’t last long and the next iteration is expected to sort any rouge results out. More significantly, this looks like Penguin behavior.”

Two days later, on 11 January, 2016, Joost de Valk, the founder and CEO of Yoast, wrote an article “Google update: Real time Penguin? Or something else?” In the article, he concluded that:

“We’re currently seeing one of the biggest and most dramatic changes in Google rankings we’ve seen in the last few years. At first, we were guessing it’s the promised real-time Google Penguin roll out, but all the reports seem to say that it’s multi-faceted and not really tied purely to links, so we’re not 100% sure.”

2. What changes did we witness in the January Google Core Updates?

Up to this point, what changes had been observed? Well, observations from Dan Petrovic and several others Webmasters and bloggers pointed that following were the main changes:

From observation of thorough analysis, Bartosz Góralewicz, the CEO at Elephate, in an article titled “Is it really Penguin 4.0? Few interesting facts”, concluded that:

“Looking at the data above, I think it is a little bit early to welcome Penguin 4.0. Many fluctuations fit the pattern of Google Penguin, but whatever we see isn’t large enough to be a fully rolled out algorithm. There are many other Google actions that could cause what we see above (e.g. Payday loan algorithm) therefore I would give it few more days or weeks until we welcome brand new Penguin 4.0.”

3. Some answers and comments from Google about Google Penguin 4.0 and the big fluctuations we saw in January 2016

On January 12, 2016, John Mueller, (Google Webmaster Trends Analyst), confirmed on Twitter that “it’s not penguin. Simple as that…”

Illyes, (Google Webmaster Trends Analyst and Google spokesman) also confirmed in a tweet that changes were “part of a core algo update” and not the Penguin 4.0 update

What do we actually know about Penguin 4.0 so far and when are we likely to see the changes?

Well, like most other Google Updates, we don’t know too much about the upcoming update. However, Gary Illyes, who took over the role of Google spokesman from Googles Matt Cutts, gives us a little insight from the following Tweet:

From the above tweet, we can safely conclude two key things:

Barry Shwartz, the founder Search Engine Roundtable and Editor of Search Engine Land, answers this very question (What do we actually Know about Penguin 4.0 this far? And when are we likely to see the changes?) in an article on his website written on the 15th of February 2016 and said:

“For those wondering when Google will release Penguin 4.0, well - I don't have any new information for you. We expected it in 2015 and the holidays delayed it to 2016 but January came and past. So now we expect it in Q1 2016, but will that happen?”

He deduced this from a tweet on the 10th of February 2016 by Gary Illyes, in response to a tweet from Jamie Dodd as seen below:

If you would like to learn more from Gary Illyes, you can watch the YouTube video below, streamed live by Eric Enge, (who hosts the webcast) on Feb 11, 2016.

4. When the changes finally arrive, what do experts speculate will be the changes of the Penguin 4.0 “real-time” update?

First of all, it should be clear that no one actually knows. Google, as usual, will most likely not divulge anything until quite a while after the changes have already taken place. However, from what we know so far, (especially through tweets by Google Webmaster Trends Analyst, Gary Illyes) analysts can make some educated speculations.

Joost de Valk is the founder and CEO of Yoast, interestingly speculates the following:

“when it [Google Penguin] first came out, it aimed to make links usable again as a metric, by punishing bad actors so severely that people were scared away from trying to game Google. It only rolled out every 8 to 12 months, so you could be punished for quite a while before your site started to properly rank again. A real time Google Penguin, which would update constantly instead of every once in a while could, in my eyes, therefore have quite the opposite effect of what Google wants it to do. If people can start testing with what works and what doesn’t work, and can get “out of jail” pretty easily, this might actually lead to more link spamming, instead of less. Time will tell.”

5. Better options to bad Link building strategies that won’t get you penalized

Since we don’t know too much about the Penguin 4.0 update, rather than do nothing, how about doing some constructive work in the meantime that will substitute bad linking strategies for better options that won’t get you penalized when the new Penguin 4.0 update finally rolls out?

6. Preparing yourself for Google Penguin 4.0 “real-time” update in 2016 and going forward:

Since the premise of Google’s mission is to provide the best user experience for search engine users, your goal should be to shun spamdexing, strive for providing better quality and value to your audience and you won’t have to worry about preparing yourself for the next update.

That being said, how can you prepare yourself for the inevitable Penguin update?

Well, for starters, putting in some good work of adopting a holistic SEO strategy in-tune with Google-algorithm is paramount. This simply means that your approach should be to make your website the best that it can be in its niche. Your site can become the best in your niche by:

If you do all this, link building will become easier and easier with time. People will want to contribute to your website and link to it without you having to put in much effort.

More specifically, Asher Elran (CEO at Dynamic Search, and founder of Web Ethics), in an article titled “How to Prepare Yourself for the Next Penguin Update” wrote about a step by step preparation and action guide. Here is a summary of what was mentioned:

You need to monitor your websites traffic regularly. In order to do so, you need to first of all establish a baseline for the traffic that your websites get. This will allow you to know what your normal inbound traffic and fluctuations look like. That way, when you get on Penguin’s wrong side, you will know and make changes immediately.

There are several tools that you can use for your analysis on website traffic including: Google analytics, Alexa and so on.

The following key points should be considered:

Evaluate your link profile at least once a month. In doing so, you should observe the following:

Make an inventory of your links and ensure that you have a balance of “follow” links versus “no follow” links. As you do so, focus more on creating good quality as opposed to over-optimization.

A sudden spike in your website traffic doesn’t necessarily mean that you will be penalized by Google. The source of the traffic will be the main determinant of whether Penguin penalizes you or not.

For example, if your sites content is relevant and trending, you will not be penalized. However, if you have a sudden influx of traffic from spammy sources, you will be penalized sooner or later.

Googles perspective is that if you have trusted links, you most likely have a trustworthy website. The reverse is true. Additionally, if you build trust, then you will build on your websites authority. This then becomes a self-sustaining growth spiral.

You should therefore always seek to build trust and authority.

To avoid any adverse repercussions from any Google update, including Penguin 4.0 update, you need to constantly monitor your website. There are several tools that are available to help you do this without much effort, but you need to put in the effort.

Conclusion and course of action

As we wait for Penguin 4.0 to be released, it is better to spend the time that you currently have, focusing on making your site as best as it can possibly be. That way, you will have done a significant amount of useful work by the time the Penguin 4.0 update is rolled out.

As most wise and prudent people will tell you, worrying or stressing about what Google may or may not do, is not a productive way to spend your time. It is better to get attuned to Googles ethos and seek to simply try and make your website as good as it can be, by catering to your audience’s best interests.