Lesson 5 of 16By Simplilearn 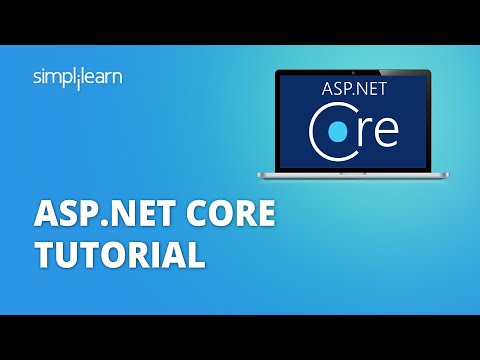 The ASP.NET Core framework is becoming increasingly popular among developers and is expected to grow in popularity in the coming years. ASP.NET is a well-known web development framework for creating web applications on the.NET platform. ASP.NET Core is a redesigned version of ASP.NET with architectural enhancements to build a modular framework. ASP.NET Core and Web API are included in.NET 5 to help developers create web and cloud apps. If you want to understand ASP.NET Core, you've come to the right place. This tutorial will provide you with a brief tutorial on ASP.NET Core.

Without further ado, let’s get started with ASP.NET core tutorial.

Why Use ASP.NET Core?

Millions of developers use ASP.NET to construct web applications. ASP.NET Core is a revised version of ASP.NET that includes architectural improvements to create a modular framework.

With ASP.NET Core, you can do the following:

Now that you have seen why to use ASP.NET Core, look at the key features of ASP.NET Core.

The concept of ASP.NET fundamental architecture is similar to that of "N" layer architecture. It defines the layers as the core component of the platform, releasing the developer of the burden of redefining it to make a solution more flexible and reusable.

The data sources could be SQL databases, and third-party services include GitHub API, send grid API, and others. The dotted arrow shows the compile-time dependency, and the regular arrow indicates run time dependency.

The business model, which contains entities, services, and interfaces, is stored in the Application Core. These interfaces contain abstractions for operations done by Infrastructure, such as data access, file system access, network calls, and so on. Application Core types include Entities, Interfaces, Services, and DTOs(Data Transfer Objects).

Benefits of .NET Core over .NET Framework include:

This picture depicts the comparison of ASP.NET and .NET Framework.

ASP.NET Core is the most used framework, and it is growing in popularity as most developers use it regularly. It is expected that ASP.NET  will overtake the .NET framework in popularity in the coming years.

Step:1 Install the required software and set up the system for ASP.NET Core development.

In the workloads under toolsets. select .NET Core cross-platform

Step:3 There are many templates present

If you want to change the solution name, uncheck the box

But if you want the soln and project in the same directory, then check the box

Step:5 Navigate to the startup.cs file and modify the message to be displayed

Step:6 Run the program by clicking on IIS Express and the message will be displayed on the localhost server in the browser.

With that we have come to the end of the article on ‘ASP.NET core tutorial’

This tutorial on ‘ASP.NET Core Tutorial’ covers its features and architecture. Apart from what is ASP.NET Core, it also includes the why to use it and its benefits. Proceeding further, you will understand the industry trends and. At finally, you saw the demo.

If you want to learn .NET, try taking the Simplilearn .NET Programming course. This comprehensive training will assist you in mastering the fundamentals of.NET programming and creating.NET projects. You will be introduced to the.NET space and coding with C#, including Visual Studio and Webforms, in the.NET programming certification course, which will help you thrive in your job.

If you need more information, please visit our YouTube channel for a detailed explanation of these ASP.NET Core tutorials.

If you have any queries in the article ASP.NET core tutorials, please leave them in the comments section of this "ASP.NET Core” Tutorial. We will have one of our professionals respond to you straight away!